Using Fashion to Rescue Our Cities From Visual Peril

Architects and fashion houses collide for excellence, infusing Luxury brand identities with a building's facade. The results? Entrancing design and another way retailers evoke sensory experiences for a shopping encounter that's been on hold for far too long.

It takes a particular combination of experimental and conventional design to build a city. But with emerging technologies, surplus diverse materials and creativity facilitated more so now than ever before, why do our cities feel like tinted blocks of geometric glass? Of course, it's not always the case. Think of London's Granary Square development and Amsterdam's colourful Hotel Zaandam proving that not all modern architecture is of a blue glass hue. But there's even more creative light at the end of a very fashionable tunnel. Is a new generation of architectural designers, and the masters of big labels collaborating, the way to go? Maybe so.

Structures converge, creating a visually diverse landscape interspersed between new-builds and traditional architecture with many retaining elements of the Gothic, Classical, Art Deco, Victorian and Brutalist styles that came before. Luxury retailers are honing in on the power of an all-encompassing building. A power celebrating its own story, evolution, and the historical and cultural significance of its location.

According to BoF and McKinsey's The State of Fashion 2021 report: "Pre-pandemic, it was already becoming clear that customers were looking for something more experiential, that's why luxury companies were hyper-focused on creating experiences." This has been a steadily growing facet of the industry as immersive and beautiful interior spaces, in-store experiences and high-quality craftsmanship have built strong brand relations with consumers. This mindset is critical. Between the collapse of physical retail as we know it, and the brighter future of its hopeful return, the tenet of luxury is likely to keep focus. But as the flesh of a building is often incongruous to its engaging interior, it’s time the facade joined forces.

Consider where it starts. The outside of retail spaces is known mainly for logos above doors, architecture blended seamlessly into surrounding buildings, and imaginative window displays—these apertures from the outside into a mesmerising world. Now, taking it one step further, architects are frequently invited to take over a store's exterior and turn it inwards - and sometimes quite literally. Using a brand's etymology to create buildings which visually represent their brand identity, and of course, creating an Instagrammable moment for passersby, potential consumers, and seasoned ones alike, where, for once, people are tempted and rightfully so, to judge a book by its cover. So who’s really paving the way?

A simple example completed in 2007 by architect firm WORKac is, of course, Diane Von Furstenberg's Studio Headquarters along New York's High Line. The pre-existing brick facade is decorated in falling lips- the iconic logo and an image that epitomises the designer herself, considering they are her own lips. Decorating clothing and accessories, and now the building itself, this redevelopment aimed to preserve New York's Meatpacking District's derelict architecture, and in this case, converging history with modernity. WORKac’s simple approach also used the area’s natural high and low points to play with the building’s view. Since then, architects and brands have taken bigger, bolder and more creative design strategies to decorate streets with a label's identifying mark.

Faced with simple wooden slats, this is architecture in its most natural form. Well-known for working on A.P.C. stores worldwide, architect Laurent Deroo often works with the simplest of materials to achieve an aesthetic that embodies the brand's minimal and timeless design approach. Neutral clothing, neutral design. It's easy to miss on approaching the store as it blends into a corner of the 22 mile-long Sunset Blvd. But this area of Silver Lake comprises an artisanal mix of styles and unique builds threaded together to create its own sense of uniformity. In that sense, each building in Silver Lake adopts an identity and A.P.C is no exception allowing it to own its place on the boulevard and reveal who it is outwards.

When architect Christian de Portzamparc set out to design Seoul's flagship Dior store, his literal conception of Dior's style became instantly recognisable as its fluid, feminine and organically shaped garments. Fibreglass treated like tulle but moulded over the facade rather than a mannequin becomes a soft, sculptural exterior reminiscent the V&A' "Cabinet of Curiosity" for Christian Dior: Designer Of Dreams - the all-white space containing floor to ceiling cases of test garments. The couturier's signature silhouettes from his working years have blended seamlessly into a new modern architectural landscape. It's just as easy to picture this structure draped over a woman, as it is to imagine what the store holds inside. 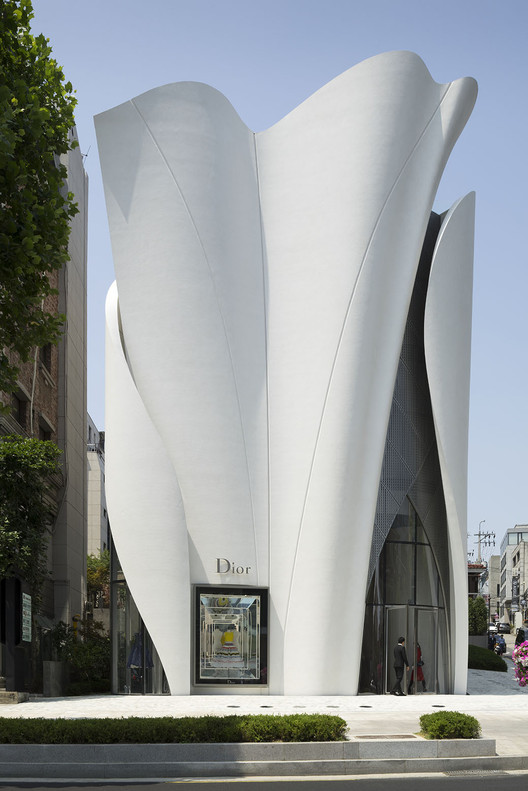 "Crystal Houses" are one of MVRDV's contribution to the world of luxury retail. With the Delft University of Technology's research on glass bricks, MVRDV has replaced the original brickwork and created a transparent storefront for the Hermès boutique. Ensuring the area's historical architecture and landscape remains, MVRDV's transformative powers are unique. This ice-like brickwork impersonates the nineteenth-century structure with a puzzle of glistening bricks. Ok, it's somewhat more traditional on the surface, but this novel use of glass and its striking arrangement embodies this luxury and craftsmanship house from the outside in.

Jun Aoki & Associates and architecture studio Peter Marino collaborated to design the Louis Vuitton's Osaka flagship store. A nod to the sails of traditional Higaki-Kaisen cargo ships - the Edo period vessels which historically used the area's port. As the Louis Vuitton house itself is home to some of Louis Vuitton's historical archives, this nod to history is fitting.

Whilst over in London, Marino's brighter, vibrant burst of coloured shards wedged on the corner of New Bond Street reflects the inside which has become part-store-part gallery with a playful exterior that cannot miss an eye.

And it's not only the stores following suit. OMA's Fondazione Prada joins an ever-growing list of art-meets-fashion-meets architecture projects. So maybe it's a good thing for architects to work with a brand's strong visual identity and story to play their part in securing the future of retail.