The Road To Excess Leads To The Palace Of Wisdom. Or Does It?

There is something rotting in the court of fashion and luxury, and we need to stem the disease. We need to break out of the feeding frenzy of production that continues to eat away and exist 12 seasons a year. We need to finally say: enough is enough.

Such were the rousing words I spoke to kick off my keynote speech at the 2018 Condé Nast International Luxury Conference in Lisbon just a few short weeks ago. Addressing the leaders within the luxury sphere in fashion, I was unafraid to ask the hard questions; unafraid to go and ask a vital question we should all be asking: what is wrong with luxury today? 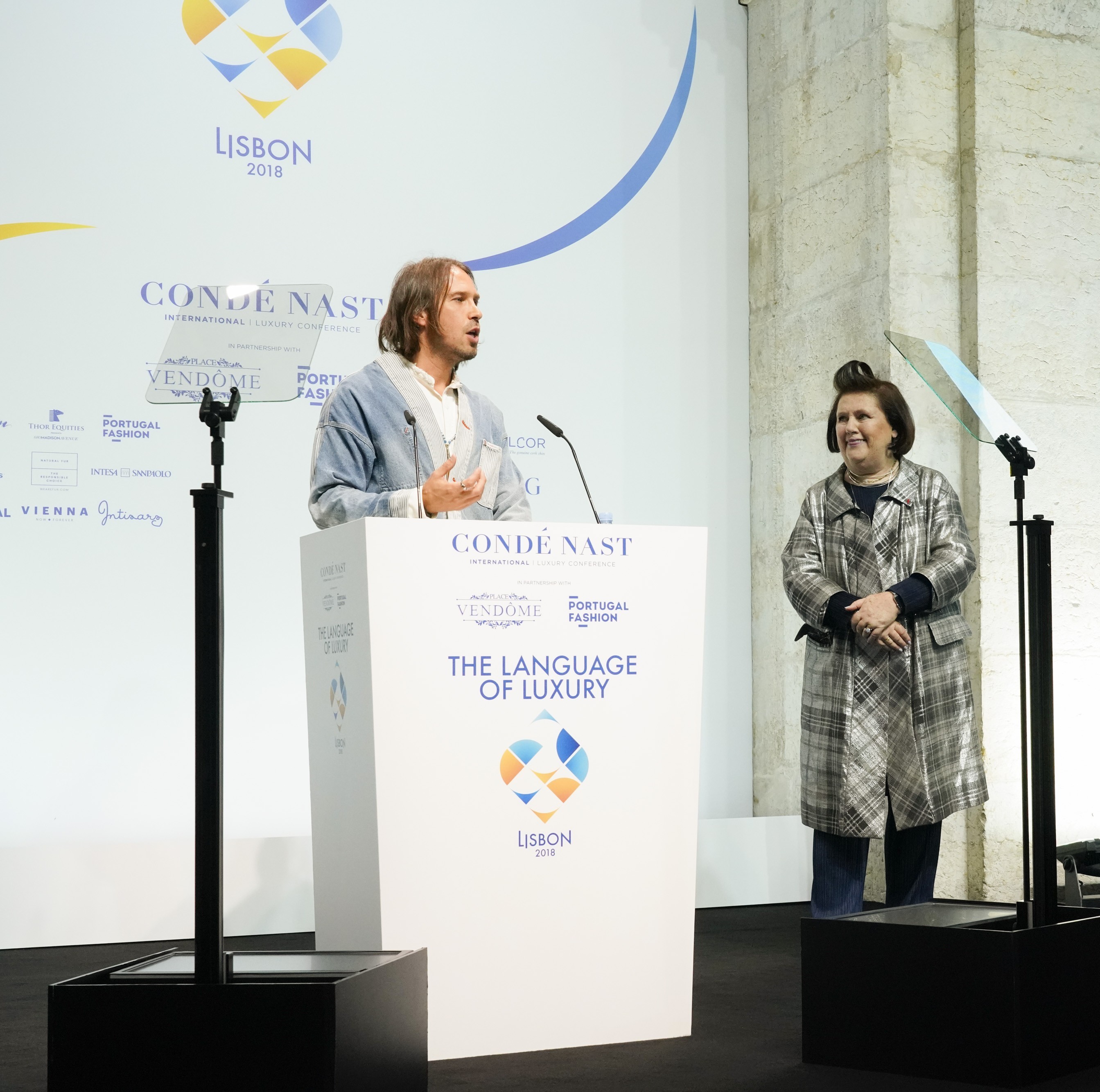 I am not alone in feeling this level of unease, which is why I also bring this conversation straight to our community—beyond the room at the CNI Luxury Conference and to the minds of our designer and fashion community. Because just what I said to all those in Lisbon, I choose to reiterate today and everyday. We need to start finding answers and we need to start the change from the inside. We can no longer remain complacent or disengaged from the serious issues confronting our industry, our planet and our children’s future. Changing the world is no longer just an option—it is now an obligation. Why? Because we now have no choice. At the very least, we have to try. Vogue was right to classify my speech as a call-to-arms. It was a wake up call to everyone.

I find no better place of inspiring than within our own community. That is why I went straight to our army of designers and asked them what they thought of luxury. What they relayed was eye-opening and thought-provoking.

Part of what makes the NJAL community so powerful is our dedication to taking the road less travelled. Instead of following the obvious paths of passive consumption, we challenge those creatures of the commonplace who want to keep us enslaved in the process. It is that energy I tried to infuse into the room. After the video, it was palpable.

Eugene Rabkin of StyleZeitgeist Magazine defined fashion as a creative industry with an implicit understanding that its brands have a certain duty to creativity in maintaining artistic standards, even if that meant a slightly smaller profit. Now it seems both the value of design and appreciation of the craft may have been overtaken by greed.

Has hype triumphed over true design? Is the cache provided by a celebrity name, more important than the vision and craftsmanship of a designer? Do we now have emoji’s instead of painters, D.J’s instead of musicians and celebrities instead of designers?

Are Instagram celebrities, who have no training or ability, taking the place of passionate and creative designers? If this is so, are we witnessing the produce of the mediocre and unskilled? Have the clothes themselves become irrelevant? A real life version of the Emperor’s New Clothes?

I posed a series of simple yet important queries to the audience: Who we are? We love our planet, right? We want to pass it on to future generations, yet microfibers from our clothes are poisoning the oceans, 73 million children under ten years old are working as child labourers, and carbon emissions are rising—due in part to the way in which our industry operates.

Fashion, we are told, is the mirror held up to society. What do we see in this reflection? Let’s be honest. We see a society that values profits over the environment. Are we seriously out of balance here?

The room was stunned. But we aren't hearing anything new, are we? Yet to move forward, it boils down to three fundamental themes: slowing down consumption, respecting people and the environment, and acknowledging human needs.

As William Blake rightly questioned in The Marriage of Heaven and Hell, do we have to drive over the bones of the dead, on a road of excess that leads to the palace of wisdom?

It’s wrong to violate human rights. Yet those within that room and beyond continue to violate the planet of its resources, condemning all future people to struggle and misery. We have to take responsibility for this and for building an industry that created that lack of responsibility.

Facing many of the gatekeepers in luxury, I pushed them to ask themselves who the role models are today. We really have to ask ourselves who the role models in luxury are.  Being an Instagram celebrity should not give you the automatic right to become the spokesperson on serious issues for the young, the impressionable and the gullible. The icons and the It-Girls of the moment hold power because we give it to them. Let the fashion gods fall, and instead, let’s praise those worth praising.

The shift to digital is a major contributor to the celebration of the empty and momentary. There is absolutely no pride in making young kids wait hours in lines for luxury gear, we should be the responsible adults empowering them to make informed choices. And there is also nothing authentic in your half a million-dollar image campaigns anymore.

I do not want to feel ashamed that I am contributing to an industry that is the antithesis of what it purports to be. An industry that is pushing an addiction on children who are blindly following Instagram celebrities as icons. To those we are leaders in luxury, I posed this thought: let’s start celebrating the artists, let luxury celebrate culture and talent.

Our industry is far from immune from the dysfunction of the larger landscape it functions within; the latest anti-semitic comments, accusations towards famed photographers for sexual misconduct, and homophobic language from industry insiders are not fashion faux pas, they’re serious occurrences that require a radical shift in thinking.

In time, those culpable of heinous acts will be revealed.  They will be brought to justice and they will be forced to face their gross misconduct and abuse of power. Our question to them has to be: how do you sleep at night?

But I forced those in the room to take responsibility themselves. We have to join and say, that we are no longer turning a blind eye, that we are not only interested in the bottom line. Conde Nast itself released a Code of Conduct, surely, these scandals cannot be good for business either: as a brand owner, ultimately, you need to take some responsibility for hiring these people. We accuse fast-fashion retailers for shifting the blame to contractors in 3rd world countries when it comes to child labour and unsafe working conditions. From now on we will not allow you to shift the blame when it comes to protecting up and coming talent, be it designers, models or fans.

If our industry stops caring for its young, its extinction is not only imminent but well deserved.

Technology in luxury should be ground-breaking, not destroying the self-esteem of young and talented creatives.

And so today and every single day I am calling for a revolution!

Tim Kreider of the NY Times recently wrote, most of the power of institutions in luxury lies in the belief people have in them. And what is cynicism if not a negative belief: the belief that nothing can change, an acknowledgement that those institutions are corrupt beyond all accountability, immune to intimidation or appeal.

The guru doesn’t sit on top of a mountain asking, "have you seen my Instagram?"

Everyone in that room in Lisbon continues to have a choice to become a leader. You do too.

If I told you a year ago that the election of Trump would have brought the biggest youth movement against the 2nd amendment, and a high school class in Florida would have been classified as one of the strongest political forces in the US, you would have not believed me. The scandals around the likes of Weinstein and Testino have initiated an unparalleled movement for supporting and protecting women rights and minorities. These are signs of movement, and we must not ignore them.

Clearly, we need a new narrative. Luxury today is an industry that is seeking answers. But we will not find them in being focused on the short-term—we will only find them by thinking about future generations, and by re-discovering our value system.

So where to begin?

I told the audience more about our work at Not Just A Label. As a cultural celebration, NJAL shows that fashion can grow in the bleakest and most far-flung corners of the globe. From being the home for the next generation of creatives to facilitating an influx of revolutionary ideas, NJAL is a dedicated force in creating a better future.

Do you stand with us?

I want my children living in a world, where they know what an acorn is, that blackberries also grow on bushes, that Elephants and Rhinos live in the wild and that alligators are not just bags or shoes. Let’s return to those beliefs so that our great grandchildren will still own the objects we make today as heirlooms, as a wonderful legacy to our brief time on earth.  So they won’t read about the 21st Century as a dysfunctional, crazed period before a new Renaissance. Instead, let us be the new Renaissance and let’s start today.

I said it in Lisbon and I state it once more to those who are ready and willing to listen and join in: Let’s start the revolution!