The Social Significance of Deconstruction

A cursory glance through any high-street rail reveals this season’s most prevalent trends come courtesy of the cult design collective Vetements and the ever-ubiquitous Kanye West's Yeezy label. The proliferation of logo stamped, oversized hoodies is one symptom; Topman’s moth-eaten sweatshirts in a familiar palette of sand and khaki are a second. These heavily referential pieces echo the unfinished, deconstructed style that characterises the aesthetics of both brands, dividing fashion press and sending consumers into a buying frenzy. So what is it about deconstructed fashion that creates such hype?

Certain reactions to deconstruction have become infamous in their own right – Anna Wintour tactlessly branded the Yeezy aesthetic as "migrant chic", whereas esteemed critic Cathy Horyn dubbed Season 2 a "drab" attempt to ‘fool the fashion world’. Another term which recurs throughout discussions of both brands is ‘anti-fashion’, a label which is largely attributed to a combination of a DIY aesthetic and implied political undertones. In the case of Yeezy, the political element was hinted at in the show invitations, which were emblazoned with a powerful image lensed in a Rwandan refugee camp. West hasn’t elaborated on the photograph, nor explicitly stated any political motives but this war-torn imagery has drawn comparisons to the work of Rei Kawakubo and Yohji Yamamoto who, thirty-five years earlier, had their work branded as ‘Hiroshima chic’ by fashion press.

Like Yeezy, the work of Kawakubo and Yamamoto was deliberately unfinished; they attracted controversy because their deconstructive techniques went against the dominant polished aesthetic at the time. Although both designers had established a reputation in their native country, their respective Parisian debuts left an enormous impact which resonated internationally and sparked controversy similar to the aftermath of Yeezy Season 3. At the time, runways worldwide were largely populated by Alaia's tight-fitting cocktail dresses, glamazon supermodels and flashy, ostentatious glamour. By contrast, Yamamoto and Kawakubo showed designs which were either asymmetric or deliberately shapeless – the idea was to leave space between the clothing and its wearer, enshrouding the female form in several layers of fabric. More controversial still were the various signs of wear and tear left on their designs; scissor-cut hemlines were left wonky and unfinished, whereas other garments were ripped, torn and deliberately distressed. 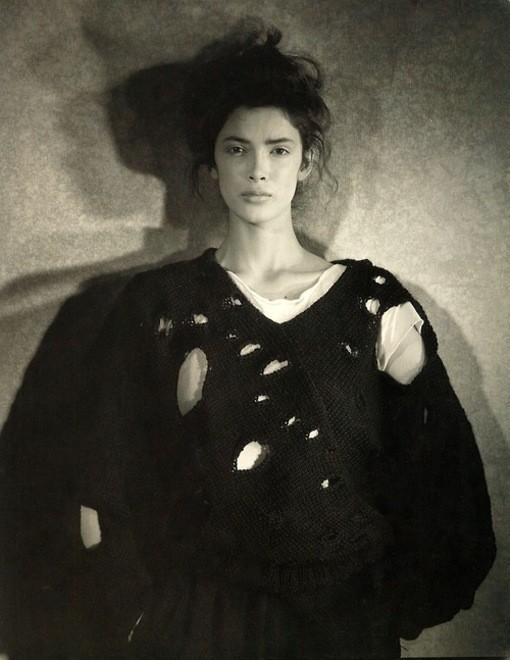 Unsurprisingly, the fashion press was bewildered by this new and radical aesthetic that deliberately challenged Western notions of beauty. Some of the most famous headlines from the time labelled it “the bag lady look” and “ragged chic”. Although both designers only granted interviews sporadically, their carefully-chosen words helped to untangle the messages embedded in their work. Yohji Yamamoto gained a reputation as an unconventional feminist, stating his intentions to hide the bodies of women in order to protect their sexuality. Instead of being designed to flaunt the female silhouette, Yamamoto created utilitarian beauty that rejected the male gaze: “For me, a woman who is absorbed in her work, who does not care about gaining one’s favour, [who is] strong yet subtle at the same time, is essentially more seductive. The more she hides and abandons her femininity, the more it emerges from the very heart of her existence.” A comparable undertone can be found in Kawakubo’s work at Comme des Garçons. Although the designer has stated in previous interviews that she is definitively not a feminist, her words can rarely be taken at face value; Kawakubo is notoriously reluctant to give interviews and often rebukes any untoward questioning with brief, two-word responses. However, it is difficult not to read further into interviews where she describes the Comme des Garçons woman as “independent, not swayed by what her husband thinks” and asserts that “[she] built [her] work from within instead of satisfying a demand for sexualised and ostentatious clothing”.

Even more controversial than the implied feminist politics were the references to class and, more specifically, references to war and chaos. Such allusions are hardly surprising given that Kawakubo and Yamamoto were born in 1942 and 1943 respectively, a period during which World War II wreaked havoc on Japan. Frequent bombings of cities such as Tokyo left thousands dead while the infamous Hiroshima tragedy in 1945 saw a nuclear bomb kill around 80,000 Japanese citizens. Fashion critics were quick to reference this, insensitively branding Kawakubo’s Destroy collection “Hiroshima chic”, but in reality, such influences found much subtler manifestations in these designers’ aesthetics. Understanding the Japanese concept of ‘wabi sabi’ is crucial to appreciating the clothing created by both designers. ‘Sabi’ refers to "an aesthetic appreciation of things suggestive of age", whereas ‘Wabi’ is said to "embody images of transience and decay". This unique Japanese concept explains the tendencies of both designers to create clothing which bore the marks of destruction and deterioration. Bonnie English perhaps best summarised ’wabi sabi’ in an academic piece on Sartorial Deconstruction, summarising the Japanese concept of imperfect beauty as an interpretation of “dignity masked in the garb of implied poverty, or a fragile perishability”. 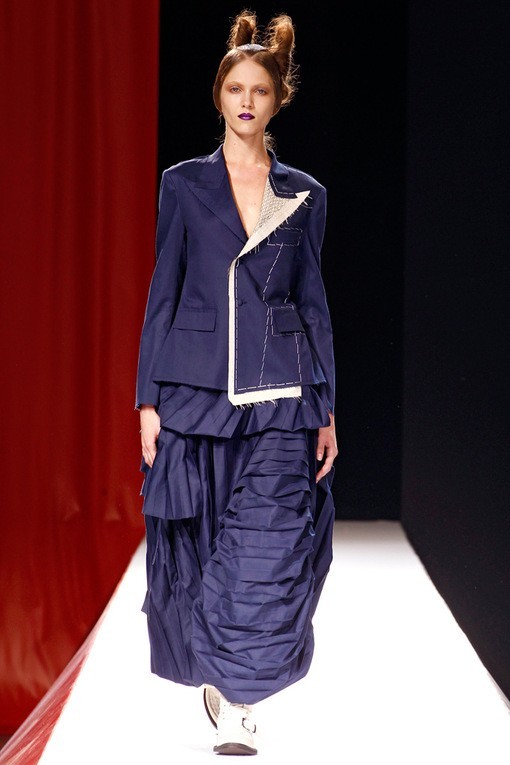 In fact, the word ‘poverty’ is one which crops up frequently in discussion of both designers. It’s important to note that the work of German photographer Auguste Sandler is another reference woven within the designs of Yohji Yamamoto; photographs of anonymous, working-class people wearing boilersuits, dungarees, overalls and pea jackets – clothes that sharply reflected their living conditions. Kawakubo’s references to the working class were more evident in her construction than her influences. She used Japanese ‘sashiko’ frequently, a ‘peasant technique’ which saw worn-out indigo garments stitched together with visible thread to create a new garment. She also famously tampered with the screws in sewing machines until they were defective, creating deliberate mechanical ‘mistakes’ in her work. These references to deprivation led to the designers being described as pioneers of the ‘aesthetics of poverty’, a term coined by fashion curator Harold Koda. In this way the techniques of deconstruction as employed by Yamamoto and Kawakubo became inextricably bound within social and political frameworks.

Fast forward to today and the same notions can be applied to brands like Yeezy and the Parisian design collective Vetements whose deconstructed jeans and oversized outerwear have sent shock waves through the industry. Vetements presented their Autumn/Winter 2015 collection just weeks after the Charlie Hebdo attacks, a collection that saw trench coats emblazoned with the word ‘polisse’, instantly imbuing their ‘anti-fashion’ looks with a political agenda. Koda maps out the effects of deconstruction as subverting fashion's “cult of luxury and glamour in favour of a reconnection with the humble, the flawed and the discarded”. As Kate Finnigan of The Telegraph pointed out, for a generation “raised on body-con, It-bag bags and pop star designers”, the deconstructed, anti-fashion looks peddled by Vetements represent a return to the real. 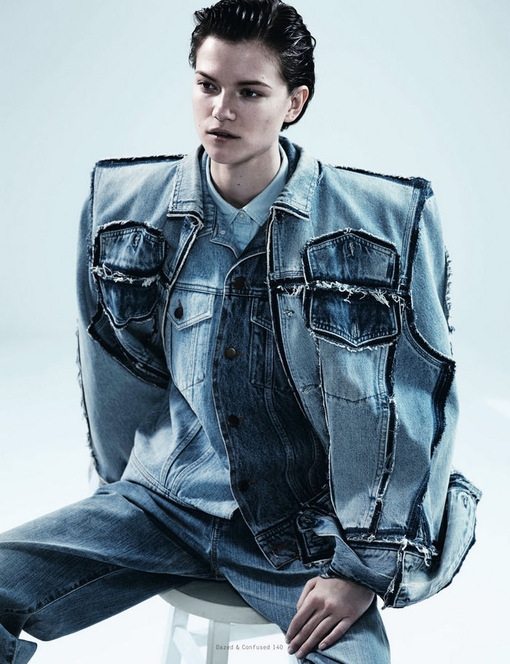 It’s frequently said that history repeats itself and this is particularly true of the relentlessly cyclical fashion industry. There's a reason the interest in deconstructed garments has resurfaced; there are uncanny resonances between the political climate of today and that of the eighties. A right-wing government is in power and a recent recession is still fresh in public memory - these were the conditions within which the punk subculture was born and aesthetics of deconstruction first manifested themselves in our collective sartorial conscience. The fact brands such as Vetements and Yeezy have gained cult status is a strong indication that, once again, the fashion industry is leaning towards clothing which has a social agenda. Whether these political motives are confirmed by the designers – often they are not – there's still something radical about showing unfinished garments that cost thousands on runways which were once showcases for the elite. The vehement reactions from fashion press which range from enthrallment to disgust prove the fashion formula of deconstruction plus a ripe social context equals huge commercial success for designers.