Throughout history, lesbian, gay, bi-sexual, trans-sexual and queer (LGBTQ) people of all stripes have learned to project, probe and communicate their sexuality through their clothing, style and behavioral signifiers rather than naming it directly. Needless to say, this is largely because LGBTQ people have been a persecuted, sidelined and marginalised community in a mass heterosexist culture.

Clothing has historically been more than a sartorial medium for the queer community, it’s adopted the form of a secret language to speak and connect with each other in periods of societal oppression. Roland Barthes was perhaps one of the most eminent scholars to theorise the semiotics of fashion formally, comparing it to a language-like institution. Since then, there has been an academic banquet of canonised queer theory to follow, fleshing out the labyrinthine complexity of performing social identities through fashion. 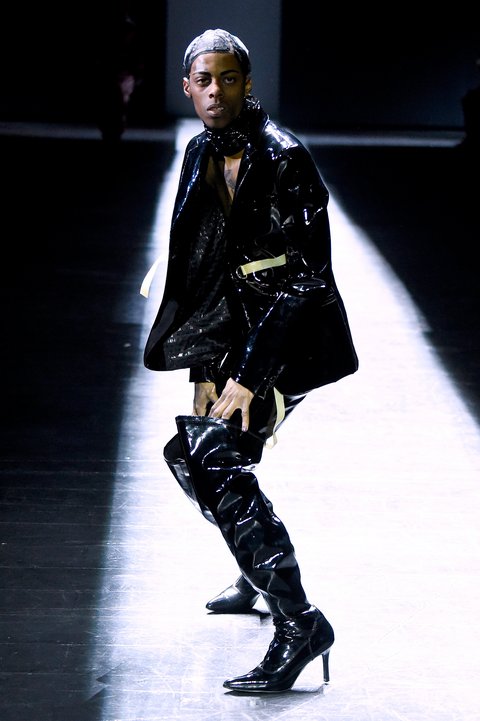 For many today, the fashion industry is understood as a 'safe space' for queer people and heralded as a commercial industry that’s marked by an affinity for inclusiveness. You can probably name more gay designers than you can heterosexual designers but does that really qualify as a clear signifier of fashion’s inherent queerness? Does fashion actually acknowledge the full extent of the significant contributions made to fashion by LGBTQ individuals? Over recent seasons, the critical narrative around gender and its politics has permeated the fashion industry at large. Binaries have been queered on runways from Paris to New York, from Gucci and Prada to Vetements and Hood By Air. While these developments affirm a wider understanding of the performativity and complexity of gender and its construction by mainstream society, this subversion of stereotypes also purports the fashion industry as the radical arbiter of queer aesthetics. Despite the industry’s gains in promoting difference, how much has the historical influence of queer designers and their subcultural association in fashion been erased, hidden, overlooked and diluted?

While high-fashion can be called out for disingenuously appropriating queer aesthetics for heteronormative commercial gain, the activist communities synonymous with pioneering queer culture have also returned the favour on occasion – most notably at the height of the AIDS crisis. Many queer organisations like ACT UP! came out with a collection of activist T-shirts that became as 'culty' as any zeitgeisty fashion of the time. It serves as a potent example of how the gay and lesbian community was forced to take action, radically revise its politics and demonstrate their collective power. The collection of T-shirts also underlined fashion's propensity to become a potent tool for queer activism and even the most banal, hetero and universal of garments like the T-shirt could be used as a medium to broaden and probe sexual identity politics. 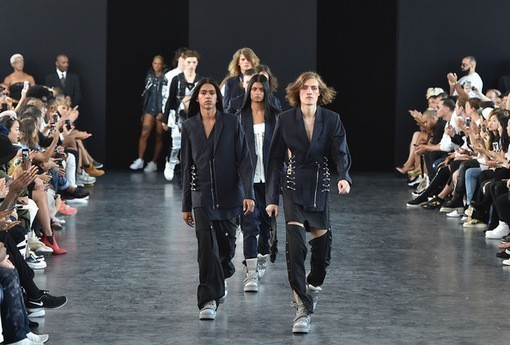 From the sober to the flamboyant, to hanky codes, AIDS awareness fashion, leather and lumberjack, LGBTQ people have always been more than just fashion’s designers, they have historically been its very trendsetters through high fashion, street style and performance gear. In the shadow of social stigma, the AIDS crisis and civil inequality, why have queer people’s significant contributions to fashion been left out of the history books? In recent years, there have been critical projects seeking to address this very topic, such as Valerie Steele’s 2013 exhibition titled A Queer History of Fashion: From the Closet to the Catwalk, co-curated with Fred Dennis at the Fashion Institute of Technology. Though problematic in its representation of largely white designers, the exhibition still takes a noteworthy position on queer culture’s deletion from fashion’s wider trajectory by making a sprint through the styles of the past.

More interestingly, however, is its lens on modern fashion through the aesthetic frame of gay and lesbian life and culture, addressing subjects including androgyny, dandyism and fashion’s idealisation of these transgressive aesthetic styles that have firm roots in the queer community. From the influence of subcultural and street styles, including drag, leather and uniform, Steele traces these aesthetic references on safari from the gritty realm of subculture to the manicured mainstream via the medium of fashion and the result was a robust display of garments and fashion artefacts. However, was this achievable simply because there have always been so many queer-identified fashion designers who design with a shared sensibility on a collective sense of identity? Would this not then beg the question: how much does a designer’s sexual orientation really emanate to his or her designs? 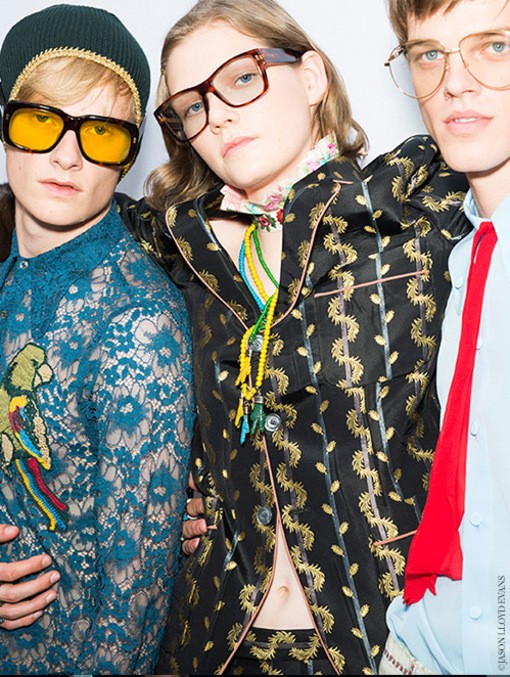 If you apply these questions to recent history and consider that homosexuality in the industry was once either a fiercely guarded or an open secret, there’s no easy answer. Christian Dior was petrified that his mother – and the wider world – would find out he was gay, Yves Saint Laurent's relationship with Pierre Bergé was only explicitly romantic or confirmed much later in his career and Austrian designer Rudi Gernreich was a founding member of gay rights group The Mattachine Society in 1950 but quickly quit, terrified he would be arrested and deported from the US. In turn, these historic examples also raise the question of how the knowledge of a designer’s sexual orientation might inform our understanding of their garments? Does 'queer fashion' have to be dependant on the designer’s sexuality or on the roots of their aesthetic references? If we did not know where the designer identified on the LGBTQ spectrum, would we still connect the dots between their use of leather and its subcultural connotations?

The cyclic appropriation of trends and its fluid exchange on the intersectional totem pole of high and low culture has seen many openly-LGBTQ designers reference subcultural tropes and aesthetics but it is hardly ever considered exploitation within that context. Though these designers' subcultural nods may have been authentic, should they consider the wider media perpetuation of their designs? Or the inevitable mainstream digestion from runway to fast fashion where the significant queer erasure takes place? Is simply crediting the gay or queer designer behind the original trendsetting style or trend enough without probing and accepting its transgressive roots? Why aren’t the famed Harlem drag balls in the 1980s - as documented in the film Paris is Burning, which showed the powerful intersections of race, class, gender and sexuality in the U.S. - credited as the arbiters of recent trends and styles dominating mainstream fashion today? Take 'butch femme', a style that NYC ballroom culture remixed from Yves Saint Laurent and Coco Chanel’s sense of androgyny but with their own sartorial sensibilities. The result was something entirely new. Fast forward a few decades later and Voguing culture has evolved into ripe aesthetic ground for young, buzzy designers to reference and, not soon after they do, these designers' collections might permeate the mainstream fashion canon but 'butch femme' suddenly morphs into 'the urban unisex trend'. 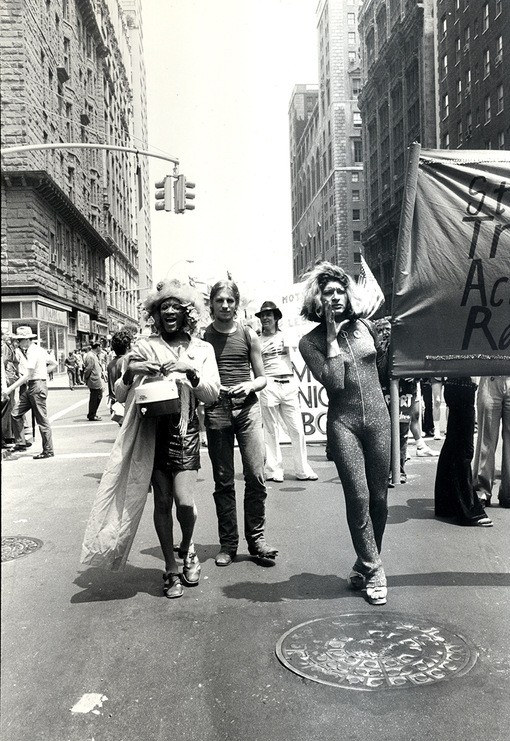 “Whenever speech or movement or behaviour or objects exhibit a certain deviation from the most direct, useful, insensible mode of expression or being in the world, we may look at them as having a ‘style’, ” Susan Sontag wrote in 1965. Style itself represents a deviation from the ordinary. It has to stand out or stand apart from the world in order to qualify as style. Sontag’s summation of style can be readily connected to the plethora of subversive queer style tribes that have influenced fashion designers and, by extension, society at large. Fashion is fluid and paradoxical but even when certain styles have been decontextualised from their subcultural 'seedy' roots in queer culture, they are repackaged by mass media to shape the gendered and sexualised identities that society at large deems 'normal'.

Nevertheless, what we have witnessed in recent seasons is a wider rejection of that enshrined hegemonic structure as the fashion industry at large (even the most storied houses and brands) begins to blur categorical boundaries between heterosexuality and homosexuality, masculinity and femininity, passivity and activity. As fashion discourse evolves into an increasingly canonised academic pursuit, perhaps we will be able to refer to a more accurate and rigorous map of queer aesthetics and the history of fashion.