At NJAL’s workshop with the CFDA last week, Stefan Siegel (NJAL Founder & CEO) joined Steven Kolb, President of the Council of Fashion Designers of America (CFDA), alongside hosts Laurie Lynn and Richard Stark of L.A. legends Chrome Hearts, for a focused discussion on the landscape of L.A. manufacturing, and what next steps should be taken to support this essential industry.

On the heels of NJAL’s global workshop series this year, in tandem with a year of colossal projects in Dubai and Berlin, as well as the digital platform’s trade show in the Vicenza region of Italy–it was an apt moment to turn the lens on emerging fashion capitals stateside. It all unfolded in August 2015, when NJAL headed to LA for a meeting with the LA Economic Development Council (LAEDC) to discuss the city’s scope as a site for fashion incubation, as well as the strengths and weaknesses of its design and manufacturing sectors. The result of the conversation was a return date to Los Angeles, with the support of the CFDA to initiate a dialogue around L.A.’s fashion landscape with the city’s local design community. Last Wednesday, Stefan Siegel (NJAL Founder & CEO) joined Steven Kolb (President of the CFDA), to present “An Intro to L.A. Manufacturing,” hosted by Chrome Hearts’ Laurie Lynn and Richard Stark at the brand’s extensive Hollywood headquarters. 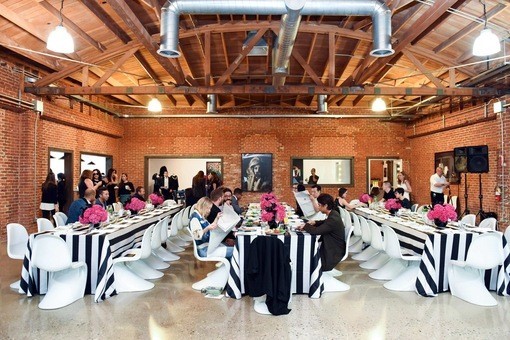 For many L.A.-based designers, it was a landmark opportunity to voice their concerns in an open environment, both amongst fellow designers, but also America’s pre-eminent fashion body–the CFDA, which is often criticized for being too New York-centric in its survey of American fashion. There’s 3,000 miles separating Los Angeles and New York, and for many young designers based in L.A.—the distance is often way too palpable. Many emerging brands and designers feel sidelined from the country’s wider fashion community and cultural centre. Add in the disorder of L.A.’s multiple fashion weeks, and such a multiplex of divisions and distance only seem to aggravate the situation. In fact, amongst the fifty designers in attendance at NJAL’s L.A. workshop, not even one had ever shown at a fashion week event in the city.

Pamela Skaist-Levy, Gela Nash-Taylor, Clare Vivier, Greg Lauren and Rosetta Getty were among the designers who attended and learned how the CFDA and NJAL work to preserve and elevate fashion production. Monique Lhuillier, Greg Chait, Josh Willis of SECOND/LAYER and Laurie Lynn Stark shared their personal experiences and the successes and roadblocks they faced when navigating fashion manufacturing in their West Coast hometown. 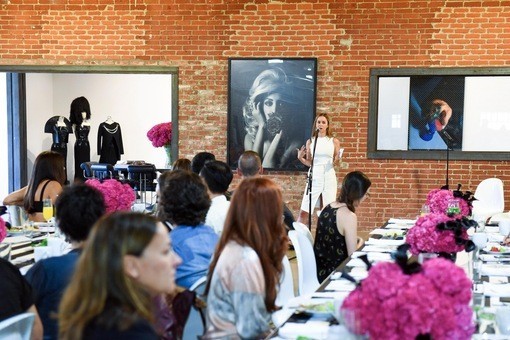 Greg Lauren, an artist and a designer, as well as the nephew of Ralph Lauren, enjoys examining his relationship with fashion. Yet in the course of developing his four-year old eponymous brand, the designer has struggled between the dichotomies of Los Angeles and New York when it comes to being a designer. At #NJALinLA, Lauren told the audience, “L.A. is unique because there’s no other city in the world with such a close-knit relationship between the culture industries. Music, entertainment, art and fashion co-exist here, and people strive to be unique. The last thing L.A. needs is more politics, or some imported bureaucratic system because it just won’t work here.” It’s an authentic diagnosis, especially given L.A.’s recent fashion heat and most designers in attendance seemed unfazed by the recent fashion media spotlight, especially in the context of its strong manufacturing sector. After all, it’s been like this for the past thirty years.

Lynn Stark, who produces over 90 percent of Chrome Hearts under one roof in the Hollywood facility that engulfs seven blocks and employs nearly 700 people, said, “As a company whose DNA has always been driven by supporting and nurturing local artisans, producing our goods here [in Los Angeles] is of paramount importance to us. I think we need to be our own monitors of this industry’s entire landscape, from sales to manufacturing to technology to protecting designs and guarding against piracy.” It’s a big responsibility, yet Angelino’s seem to be natural caretakers of their locale. 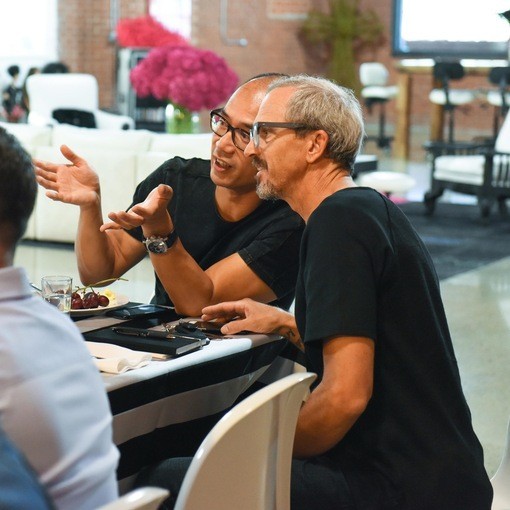 Unlike New York City’s garment district, where many manufactures and garment workers live miles away in New Jersey or Queens–the relationship between designers and garment workers in Los Angeles is a lot more personal. Josh Willis of SECOND/LAYER and Article N°  says, “We grew up in a Latino neighbourhood in L.A., where many garment workers live and it’s a real community here, that we want to impact and sustain together.” There’s nothing sterile about the relationships between designers and manufactures in Los Angeles, and of course there are problems, like any dysfunctional family but the key word is family. Every designer in attendance seemed adamant to resist the divorce between the designer and manufacturing sectors in other fashion capitals, and expressed nothing but solidarity with Willis’ impassioned statement, as well as Chrome Hearts’ mission statement­ who remain the trailblazers for an entire community of fashion talent in the city. Across NJAL’s workshop series around the world, the team has always found that designers based in emerging cities, from Ukraine to Beirut are so much more invested in the entire process of fashion, because they have to be. In L.A., designers are just as savvy because they’re too aware that the beating heart of the American fashion industry remains in New York, for now. 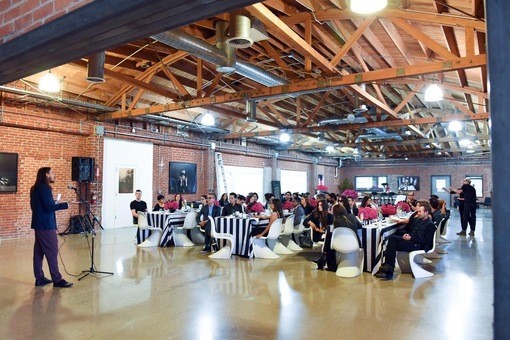 On the subject of manufacturing in Los Angeles, designers were overwhelmingly positive, yet acknowledged the hardships as part of a long-term vision. Greg Chait, behind luxury knitwear brand The Elder Statesman mentioned that a vertical manufacturing strategy on a smaller scale suits the pace and demands of his brand, and allows for intense quality control. Chait employs 30 people, many of whom are skilled artisans who handknit and dye his cashmere sweaters and blankets. Yet, many designers warned that L.A.’s skill-set for high-end manufacturing remains limited, and some designers even claimed to have followed garment workers to eight different factories in order to sustain their working relationships. However, Juan Carlos Obando, a firmly established luxury occasion wear designer encouraged his fellow designers to adopt an open mind when it came to L.A.’s repertoire of manufacturing skills. “L.A. is known for its denim production and that’s an industry that should never be underestimated,” declared Obando who regaled attendees with a smart story of how denim is a challenging complex material to sew, and much more so than any silk. Obando’s decadent gowns, which are a firm favourite of Hollywood A-listers, are often the result of the designer’s mission to retrain skilled denim garment workers with the specific requirements of his luxury design aesthetic. 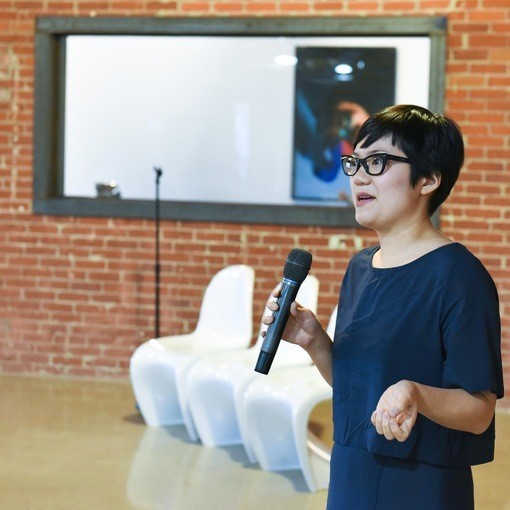 However, for emerging designers, these kinds of strategies are not always within their means, and while they strive to establish relationships with manufacturers, it’s not always friendly. Many designers complained that L.A. manufacturing urgently needs an ethical code of conduct, as many young designers have been burned by manufacturers who often cast aside their smaller orders in favour of larger ones. Similarly, for young designers without the capacity to produce in-house, the conceptual range of manufacturers is often limited, and any new design ideas are too often met with hostility and complete resistance. At t #NJALinLA, inside a forum dedicated to discussion amongst designers, these kinds of problems were often followed by a multitude of solutions. One soloution NJAL proposed was to expand the CFDA’s existing manufacturing database to L.A., where manufactures that wish to join must agree to a code of ethics, which protects every designer, whether big or small.

It was an exciting start to a much broader conversation that’s on the horizon, and NJAL is excited to strategise L.A.’s future in fashion and work more closely with both the design and manufacturing sectors. A long-term vision is to bring NJAL’s landmark trade fair event Origin, Passion & Beliefs (OPB), in a reinvented format to L.A. as a site to connect and catalyse creativity amongst the city’s design and manufacturing communities. #NJALinLA wrapped up with an open discussion amongst designers where ideas, suggestions, and challenges continued to pour. It was a critical event iniated by NJAL to identify areas of production in Los Angeles that need urgent attention with financial and resource support, in order to sustain both its fashion heat, its creative classes and its strong manufacturing legacy.