One year ago, Ukraine was embroiled in political turmoil, and while the global fashion press stayed away, NOT JUST A LABEL joined its stable of Ukrainian designers on the front line. NJAL has once again returned from Kiev where the team launched ‘NJAL for Ukraine’, an exclusive workshop dedicated entirely to its stable of Ukrainian fashion talent. Today, NJAL’s Kam Dhillon charts change and reflects on the realities facing young designers and the future of its creative class. 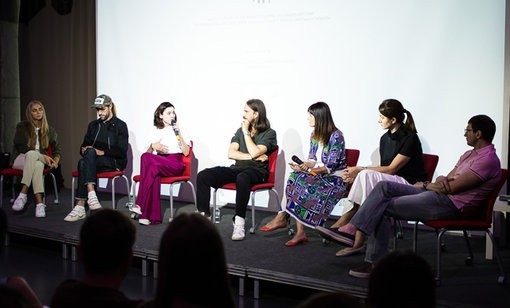 Ukraine is Europe’s second largest country, and a land of wide, fertile agricultural plains, with large pockets of heavy industry in the east. It’s also a country commanding some of the best fashion talent in the world, and following NJAL’s persistent and loyal celebration of Ukrainian talent, in both calm and crisis–support from iconic fashion bibles from Vogue, to purveyors of cool such as Opening Ceremony have since followed suit and followed in NJAL’s steps to dub Ukrainian fashion talent as “The Innovators”.

This exclusive workshop dedicated entirely to its stable of Ukrainian fashion talent. NJAL Founder Stefan Siegel and Head of Scouting, Robert Cavell-Clarke, lead a workshop and panel discussion that was open to all designers and creatives–regardless of their political position. The aim was to unite and celebrate Ukrainian fashion’s resilience amidst its politically turbulent terrain and the objective was realised with overwhelming yet humbling success.

As it all unfolded, there were wide-eyed smiles and pangs of howling laughter that on occasion flickered into more intense conversations about the emotional reality of living in a war-zone. Yet, the mood was never macabre, and there was an overarching sense of optimism that punctuated the evening–even when talk turned to the harsh realities that these creatives have to face in their daily lives while a war rages on. 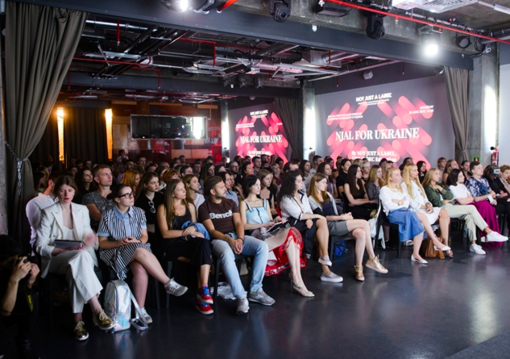 Upon NJAL’s last visit to Kiev for Ukranian Fashion Week in March, the team left with an unfaltering conviction that its design community was ready for the future of its country, however uncertain it may be. Yet, this time around, designers spoke more freely in a forum solely dedicated to them, away from the pressures of a gruelling fashion week schedule.

The feedback was eye opening and at times uncomfortable, and such a position of hope also wasn’t uniform. Some designers recount the disenchantment and struggles of its nation’s youth, where in Kiev alone, 95% of working-age men are evading military service and use a variety of methods from bribery to fleeing to other countries. In western Ukraine, more than half of the youth population has left the country over the last few months. Overall, 70% of the working population in the western regions of Ukraine went to neighbouring Poland and Romania, with many others fleeing to Italy, Germany and Austria.

Nevertheless, much of Ukraine’s design community has chosen to stay, and it’s a bold choice especially when creativity continues to be stifled at almost every corner. To be a practising fashion designer in Ukraine is no easy occupation–it requires steadfast elasticity. Fabric is expensive to buy, even more expensive to import and Ukraine’s biggest local market Russia has become almost inaccessible, meaning a designer’s client base is achingly limited. Yet such limits are unbound by the promise of e-commerce, and many of NJAL’s Ukrainian designers are able to fund their livelihoods by selling through the platform’s e-commerce channel, yet fact that PayPal continues to be blocked in the country is another harrowing burden on a designer’s income. 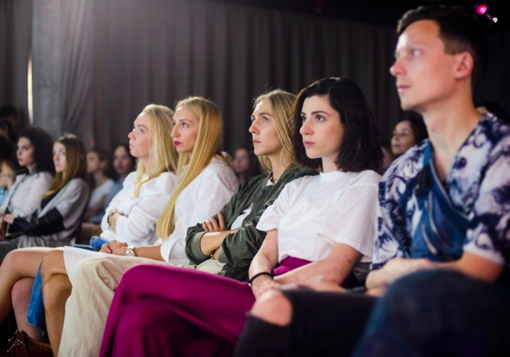 A real resilience is required to withstand such limitation and still thrive on your own creativity and whole-heartedly commit to it. It takes only a brief glance at Ukraine’s history to see that passionate, political activists have always been recruited from the artistic and creative communities. It’s no coincidence that 17th century Cossack Hetman Ivan Mazepa was a composer, and that western Ukraine’s socialist movement stems from beloved poet and writer Ivan Franko (who unsuccessfully ran for office several times).

Ukraine’s political reality today is hardly this utopian, and some designers remove their design practice from the context of politics entirely and claim Ukraine’s conflicted political situation has no affect on their design practice at all. You could call such a position naive, a privilege, ignorant, or a simply a coping mechanism, but its impossible to question the unwavering commitment of both Ukraine’s design community and bodies such as Ukranian Fashion Week that all work to withstand the mounting pressures of a country in crisis and continue to celebrate creativity with such hugely, elaborate showcases. 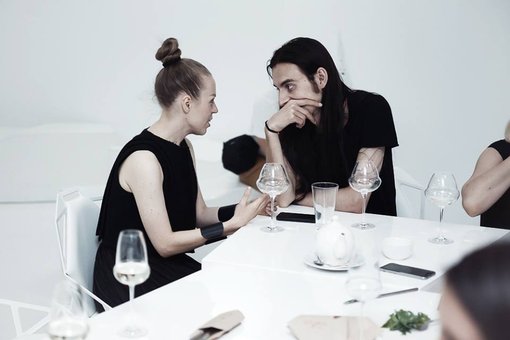 For designers today, the future is far from bright, and many feel as though the country needs to be stabilised before anyone can start looking in an onward direction with any confidence. While for some, politics is far removed from fashion, the reality remains that the two are very much intertwined. One designer tells NJAL that it’s as simple as selling to a Russian consumer that can label you a traitor to your country. For others, politics doesn’t influence or hamper their creativity in any way, shape or form. It’s true that designers are no longer affected by the more harrowing effects of wartime, but some things are getting easier. Prices in production have dropped, and the prices in hiring a workforce have also dramatically decreased, with some even comparing the manufacturing quality to China along with a spike in interest from foreign markets to access Ukraine’s manufactuers.

While fashion might be propelling Ukraine to the world stage, everyday life in this country is far from normal. Police corruption is rife; with designers warning tourist friends to not carry their passports with them, official visa documents saturating the black market and to even see a doctor requires some sort of bribe. Its economy remains in flux, with the prices of food inflating relentlessly, and then comes the questionable rise of foreign investment in certain pockets of the nation’s industry. Many connect the skyrocketing sales of supercars in the country with the rise of the arms industry, and in wartime such spoils are suspect given the increasingly widening gap between the social classes.  It’s this kind of debauchery that’s part of daily life here and things might not change for a long time.