NJAL reflects on a defining year that has seen the digital platform expand offline into new territories. In 2015 alone, NJAL has stirred a storm of activity that’s seen us eclipse our digital roots time and time again, to physically manifest in cities around the world with large-scale, immersive projects and a global workshop series that has made stops all over the world. NJAL muses on a monumental year...

It’s been a whirlwind year here at NJAL. Our global community of designers has now exceeded 20,000 and they hail more than 110 countries, making us one of the largest pools of creatives in the industry. NJAL has graduated into an institution, and we’ve eclipsed our digital roots and manifested in physical spaces all over the world: from our immersive retail hub in Dubai, and our interdisciplinary showcase of fashion and art installations in Berlin, to an annual tradeshow in Italy, as well as an on-going educational workshop series that has transplanted from London, to Kiev, New York, Milan and Beirut with even more global jaunts on the horizon. Instead of ending the year quietly, NJAL spent December in New York City where the digital platform opened its landmark fashion hub at the iconic Waldorf Astoria New York. NJAL’s New York City flagship retailed fashion from its very best NYC-based design talent, and caps off a defining year. 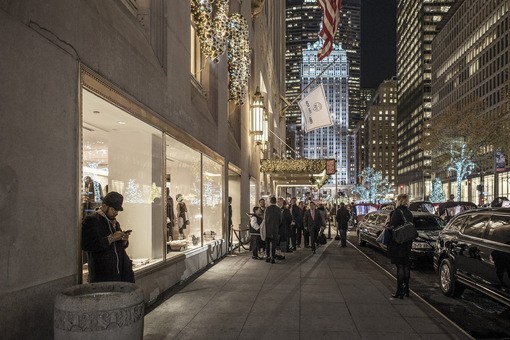 The year’s punctuating projects began in the Middle East, when the Dubai Design District (d3) invited us to set-up shop with an immersive-experience pavilion. Our decision to lay our first bricks-and-mortar in the Middle East was one initially laced with cynicism. Typically, the Middle East is defined by its consumption for luxury at a frantic pace–was it really ready to eschew big, brand behemoths in favour of NJAL’s independent, emerging talent?

Any preconceptions were immediately dispelled following our opening night, and over 21,000 guests poured into NJAL’s carefully crafted fashion hub that featured a curated selection of truly unique, original and even bespoke items from 200 NJAL designers, from over 50 countries. NJAL might be a fashion platform, but we always look beyond commerce, and we specifically designed our multi-sensory pavilion to accommodate curiosity and stimulate the sensorium. Emirati designer Bint Thani unveiled the first ever 3D-printed dress to be made in Dubai in collaboration with Inter | Act and musicians such as Muhaisnah Four, Darren Ashley, Dalt Wisney and Boiler Room’s Bradley Zero all performed within NJAL’s space alongside a running program of workshops with The NJAL Team, as well as an engaging manifesto from trend titan Li Edeelkört. 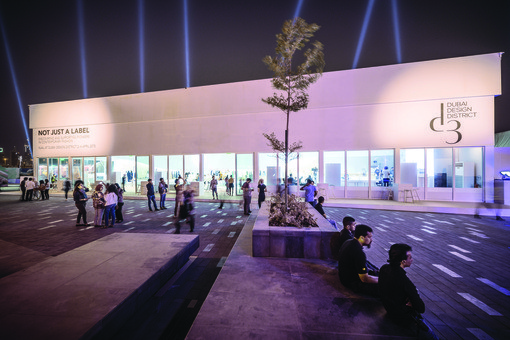 NJAL’s commitment to education has seen the team amble every corner of the globe, from Warsaw to New Delhi–we’ve seen, scouted and spread our core message to revolutionise the fashion industry. More pertinently, we’re committed to aiding our designers in politically unstable territories, and this year, we returned to Ukraine and Lebanon––both nations embroiled in political turmoil to engage with our creative classes. NJAL arrived in Kiev to host a dedicated workshop to unite and celebrate Ukraine’s fashion resilience, as well as examine the reality of practicing design in a war-zone and provide a safe forum for uncensored thought and reflection.

In Beirut, where the political climate remains intensely precarious, NJAL worked with the students of Creative Space Beirut, a highly lauded institution offering a fashion education at no cost, to both diversify the Middle East’s creative cadre and make the fashion industry a more accessible pursuit for disadvantaged youth, as well workshops with The American University of Beirut (AUB) and The Starch Foundation, a non-profit organisation that helps launch Lebanese emerging designers. In both Ukraine and Lebanon, NJAL engaged with its set of emerging designers to identify their most critical struggles and strategise an action plan for creativity to thrive in such precarious environments. Our global workshop series continued its global circuit, with stops in New York City, where NJAL ran workshops on sustainability, transparency, collaboration and disruptive innovation at the Brooklyn Fashion + Design Accelerator, Manufacture New York and the Fashion Institute of Technology. We’ll be returning to New York City, to set-up shop once more, with crucial backing from the New York City Economic Development Corporation as well as the Office of the Mayor, to support “Made in NY” initiative. NJAL’s Made In New York retail hub will develop and operate as a large-scale, temporary retail store, compromised entirely of NJAL’s community of New York-based design talent, and their locally designed and produced wares, that showcase the originality and diversity of locally manufactured products. We’re also looking to Los Angeles as the new nucleus of fashion in the US, and will work with the Council of Fashion Designers of America (CFDA) to encourage more interaction between the city’s strong manufacturing base and its diverse community of design talent. 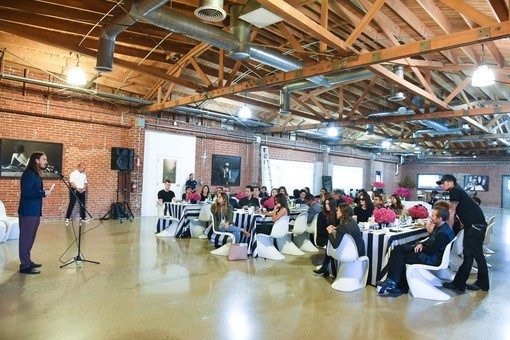 Our landmark project is undoubtedly Origin, Passion & Beliefs (OPB), which was staged for the second time in Vicenza, Italy. It’s an entirely new trade show concept, eschewing tired conventions to connect global creativity with the legacy of Italian manufacturing. It moved way beyond a typical industry event; OPB is more like an incubator for opportunity, honest connection and raw, creative engagement. NJAL handpicked 100 designers truly global in scope, hailing from 42 different countries around the world to connect with some of Italy’s most illustrious manufactures and revive the Veneto region’s cult of craftsmanship. Some of these designers’ countries are war-torn, politically unstable and creatively hostile, so to see these designers make use of Origin as a platform for skilful engagement, with the legacy of Italian manufacturing is always humbling. This year proved why an event like Origin is so incredibly critical–not just for Italian manufacturing but for supporting and pioneering creativity as a whole. 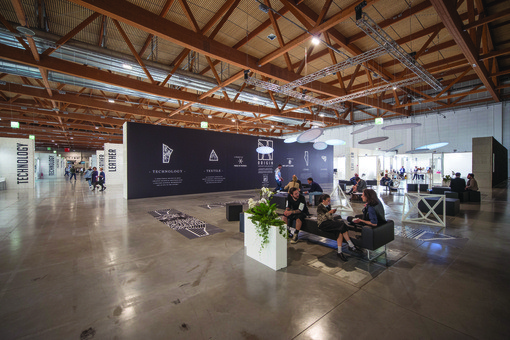 We also launched the second edition of The Future of Fashion Program, with Who’s Next and Premiere Classe to forge, facilitate and increase the entry of emerging talent into the trade shows universe. It’s a crucial stepping-stone for 30 emerging designers to grow internationally and showcase in the heart of the fashion capital that is Paris to a key industry audience, for up to three seasons–all for free! In the last edition, all the finalists acquired over ten new stockists and grew their brands expediently; in what are easily Europe’s biggest trade shows.

At the height of summer, NJAL didn’t slow down. Instead, we collaborated with German e-commerce giant Zalando to curate an interdisciplinary showcase of fashion, art and cross-creativity celebrating local talent in Berlin, Germany. With cult fashion bible magazine i-D as media partner, it was another milestone for NJAL to celebrate and accelerate European creativity across all artistic fields. We carefully curated a selection of local designers, artists and creative practitioners to create site-specific installations as well as a selection of educational workshops, symposiums, exclusive previews and fashion film screenings, celebrating Berlin as the most subversive creative capital in the world. 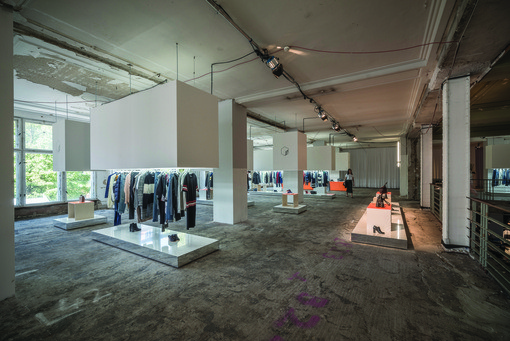 Come autumn, it seemed an apt moment to turn the lens on emerging fashion capitals stateside. NJAL returned to Los Angeles, with the support of the Council of Fashion Designers of America (CFDA), alongside hosts Laurie Lynn and Richard Stark of L.A. legends Chrome Hearts, for a focused discussion on the landscape of L.A. manufacturing. It was an exciting start to a much broader conversation that’s on the horizon, and NJAL is excited to strategize L.A.’s future in fashion and work more closely with both its design and manufacturing sectors.

Instead of ending the year quietly, NJAL spent the holiday season in NYC and opened its landmark fashion hub at the iconic Waldorf Astoria New York. With crucial backing from the New York Economic Development, it was all part of a mission to support and accelerate the ‘Made in NY’ initiative, with a carefully curated pop-up shop to showcase the very best of NJAL’s NYC design talent. NJAL also played host to a series of conversations and discussions with the city’s fashion fixtures and industry impresarios to address all things ‘Made in New York’. 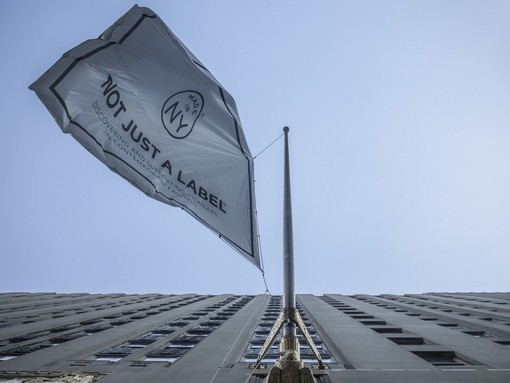 By setting up a large-scale, temporary retail store, compromised entirely of our special community of New York-based design talent, and their locally designed and produced wares was a dream come true, not just for the NJAL Team, but for every single designer involved. NOT JUST A LABEL | Made in NY was more than simply a curated showcase of garments, it was also a love letter to the City of New York, in all its history, stylistic splendour and endless diversity.

As 2015 draws to a close, NJAL is hard at work plotting its next global endeavour. We’re just a small team, working from our East London office with a constant global outlook. Whatever shape or form our next project will take, there’s no doubt we will activate our capacity for unhinged creativity and work to completely revolutionise the fashion industry, as we know it today.