The digital revolution is here, but despite the opportunities the internet provides, nepotism is still rife. NJAL's editor Tabi Jackson Gee argues that the industry must find more ways to welcome outsiders in order to evolve

Fashion is reluctanctly trailing behind other industries as we emerge into a brave new digital world. A YouTube star can write a song and find fame for free, an unknown writer can pen and publish a bestseller themselves. A fashion designer can make their clothes; but how do they showcase and distribute that collection? Few new platforms have emerged to facilitate growth outside the traditional channels, and those same channels are still closely guarded by a small, elite group of insiders. 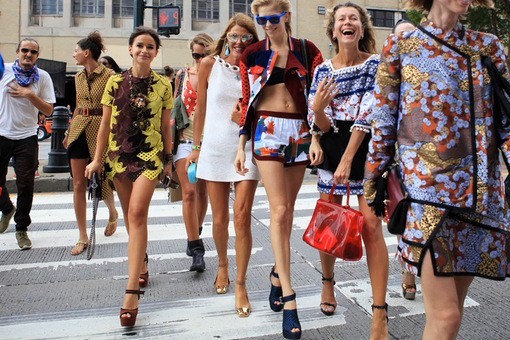 This is one of the many areas Simon Doonan touched on in his book Asylum; an insightful, entertaining and highly thought-provoking read on the lunacy of the industry of fashion. It's a loving memoir, but it explores some important issues that are still stifling the industry today; nepotism included. 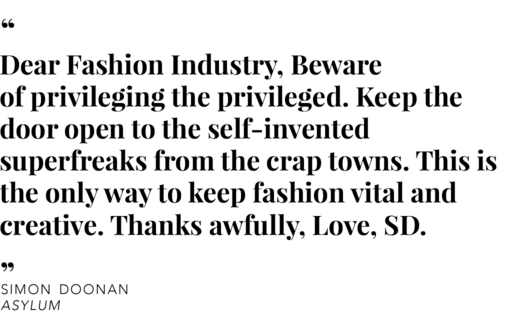 As a concept, nepotism dates back to the middle ages and the medieval Catholic church. 'Nepotismo' is an Italian word that derives from the Latin 'nepos', meaning nephew. Senior members of the church who had taken vows of chastity would pass titles and legacies onto their nephews, building strong family dynasties that closed doors to outsiders.

Nepotism in fashion can sometimes look like this too, but it comes in many other forms. It's an expensive industry to break into; unpaid or poorly paid internships are still rife and living in the cities where the best jobs are is astronomically expensive. Parents with well placed contacts can get introductions for their offspring and a foot in —  if not always through —  the door. 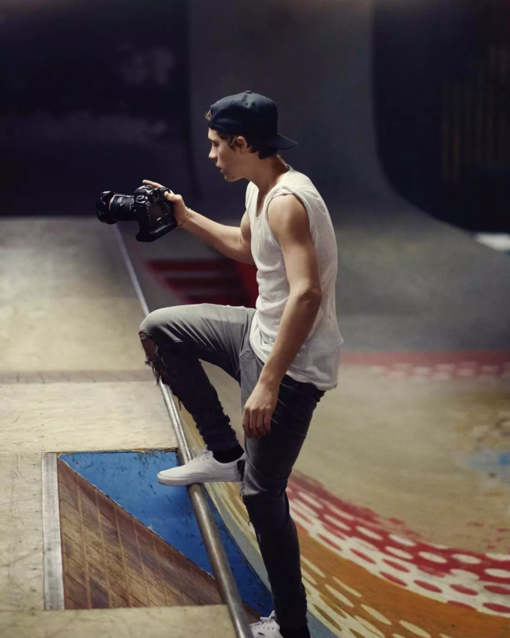 And nepotism is not just accepted, it’s celebrated. Fashion houses use celebrities' offspring to tap into new demographics, on the catwalk, in their advertorials, even shooting their advertorials. And every time ‘the daughter of’ or ‘the son of’ becomes 'the face of', the industry collectively coos over the appointment. It's an impulsive grab at that low-hanging fruit of social media fans and a cheap marketing ploy. And so, fashion dynasties strengthen from generation to generation and new talent is ignored in favour of old DNA. But does this push the industry forward, or stifle it, dwelling on the names of the past and suffocating creativity?

At times of uncertainty and diminishing disposable income, brands using well known faces, and keeping things in the family on the business side too, is not unsurprising. Nepotism as a familial transaction is at its base a very relatable human behaviour. Parents who have earned a living, and found success in a certain position, will have advice and contacts that someone who’s parents have not could only dream of. And just as you cannot judge a parent for passing on wisdom, nor can you cast aspersions on people who’ve grown powerful fashion houses and want to pass their business on to the next generation. It's their prerogative.

And nor does nepotism necessarily denote a lack of talent. Stella McCartney is arguably one of Britain’s best designers. She puts sustainability and ethical practices at the forefront of her (very successful) business. Many doors were open to her thanks to her father’s fame, but it is her own hard work and integrity that has defined a respectable career. 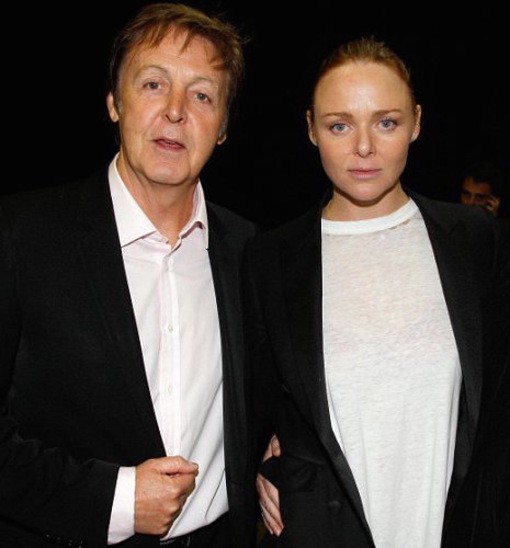 But for every Stella McCartney there are the Alexander McQueen’s of the world, the outsiders who fight their way in. McQueen’s ascent to fashion royalty was a meritocratic affair consisting of hard work and unadulterated talent. But the conditions in which he broke into fashion were absolutely not in his favour.

If there were more paths into fashion, the industry would be a better —  and to use that buzzword —  more 'diverse' place. This is not idealism, this is good business sense. In a global marketplace where citizens define themselves increasingly through experience and values, businesses need to be clear on what they stand for. Right now the nepotistic, inward looking practices of a self-serving elite continue to cast a shadow on what is one of the world's most exciting, creative and economically important industries. 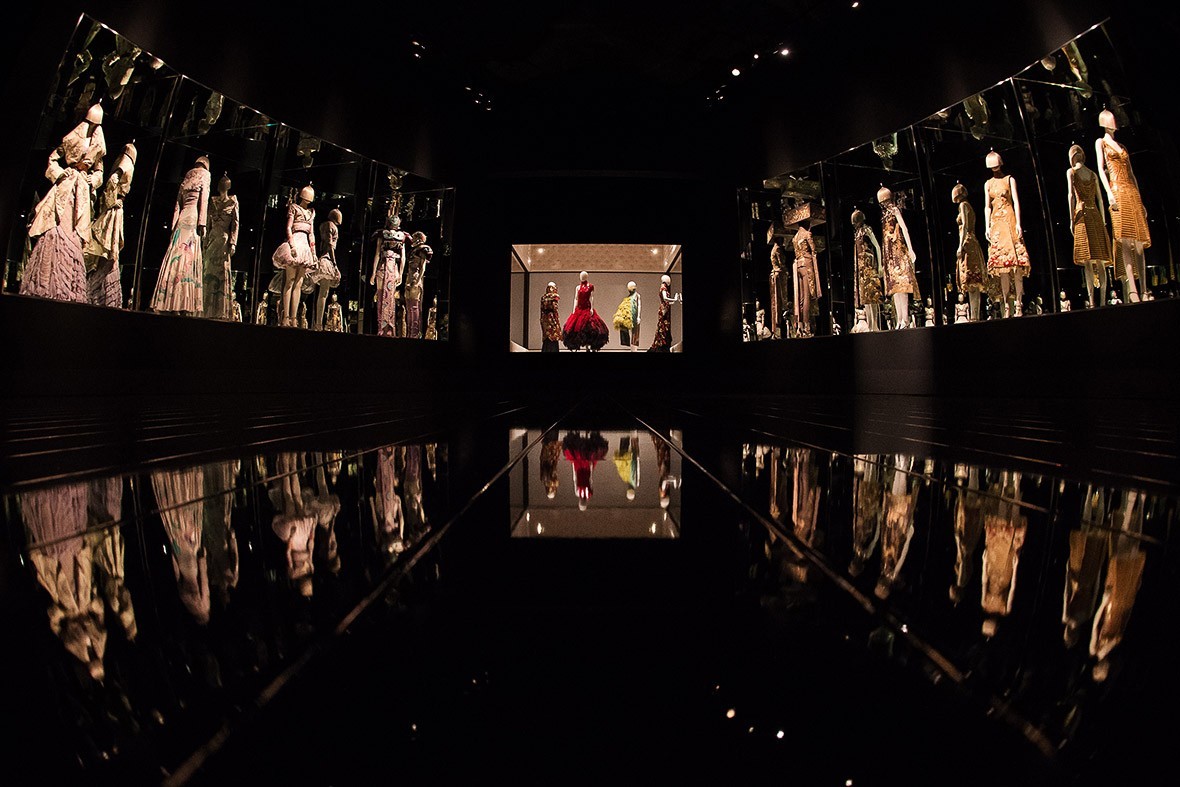 With almost unimaginable technologically-driven changes just over the horizon, now is the time to look beyond immediate circles and build a strong, diverse workforce that consists not just of fashion insiders, but talent from far outside the industry, with skills that can prepare a brand for an entirely digital, entirely different eventuality.

Right now, there are too few grants and too little funding for young designers, and too often the same small circle of recent graduates share a large portion of the limelight. But as the world changes perhaps there will be more opportunities for the citizens beyond the borders of wealthy nations, for the people born into families who don't provide them with the keys to an empire, and for those 'self-invented superfreaks from crap towns' to turn over the established order and push the industry forward to a more inclusive and stronger future.