The Mask is the New Face

Today, more than ever, technology has deprived the individual of any privacy. Being connected and technologically integrated means giving up one’s privacy. The facial recognition systems in use on social media and various types of app observe us in silence. Perhaps one answer might be to invent a new face, to find a private identity? What does the mask mean today? Always present in every society, often used as a means of connection with the divine, now it has become an engaging fetish and trend, straddling fashion and art, for a game in which being and appearing are reversed and alternated. 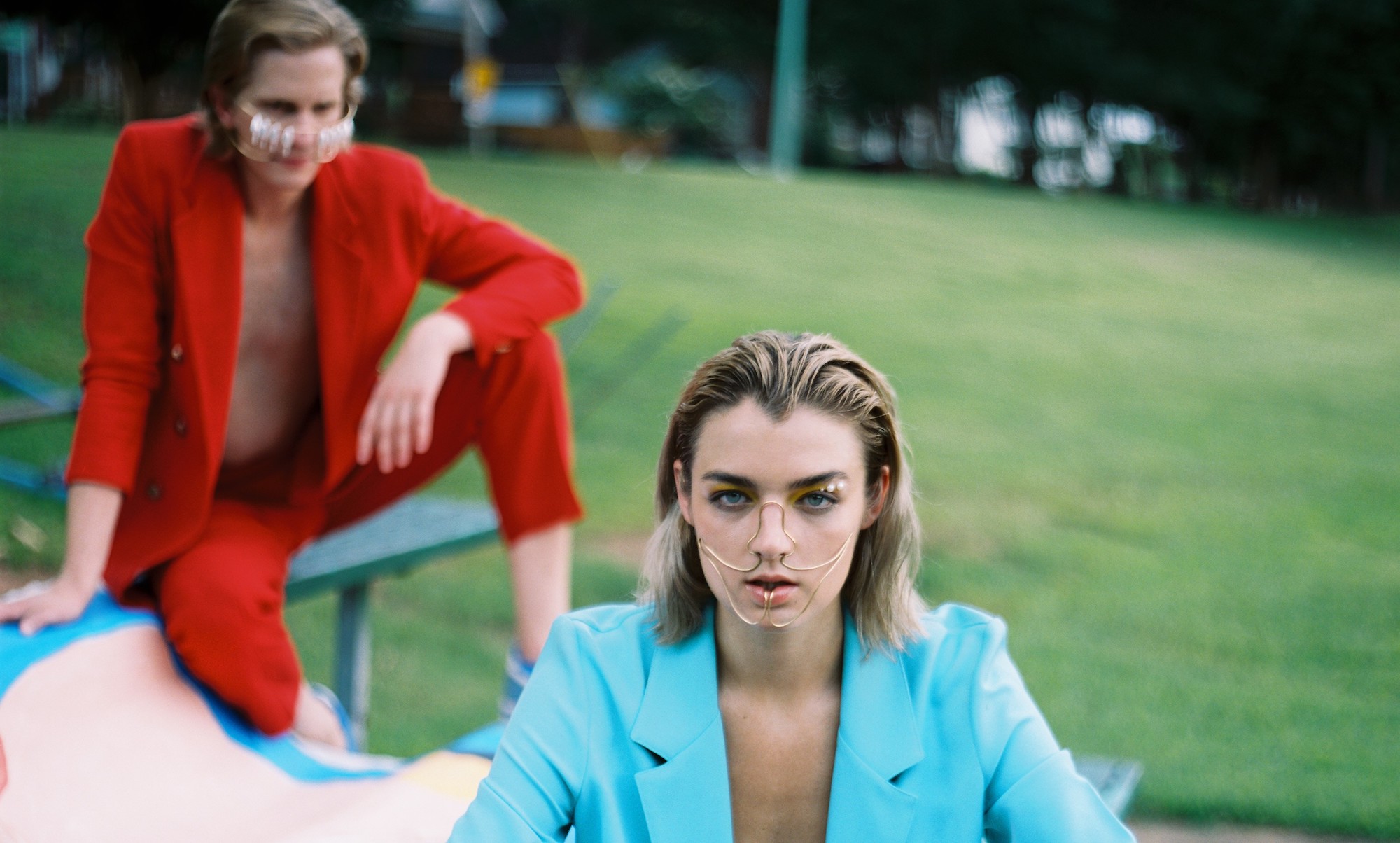 From ancient times onward, the idea of the mask has been used in the field of psychology and in reflections on culture as an element that accompanies individuals on a daily basis, since it has a particular and important social role: we are never truly free from masks except, perhaps, when we are alone with ourselves.

As Oscar Wilde said "Every man lies, but give him a mask and he will be sincere".

One the one hand, the mask conceals, but on the other it reveals, and can be, in this sense, an excellent metaphor for expressing oneself. The thing that provokes the change is a different perception of ourselves through what we imagine others see in us by way of the mask. The mask somehow makes us feel protected and at the same time exposed, it represents, anyhow, the opportunity to observe ourselves through the gaze of the viewers.

Today, the narcissistic obsession with the face, developed by the culture of selfies and social media, has led to a veritable idolatry. 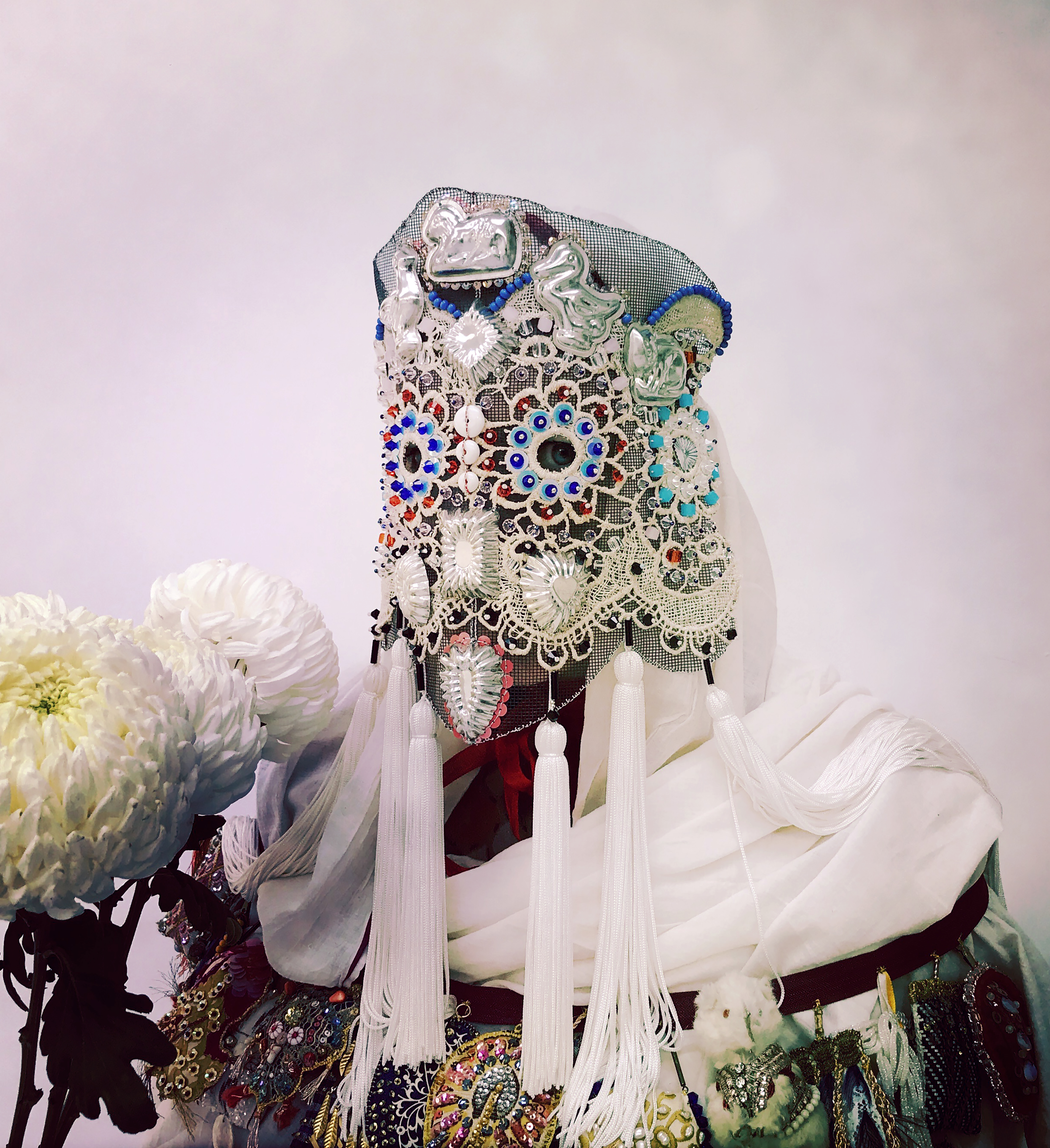 In recent years there has been a proliferation of creativity around facial decoration, leading to results both original and virtuoso, often oriented towards investigating the theme of identity in an age of compulsive sharing.

An elegant example of this alchemic and archaic balance is the jewellery series Contemporary Gods by Tal Amitai, which both sums up his career path at Shenkar College and summarizes all the information and visual materials he has absorbed as an artist, designer and creator through the years. Ancient iconographies, ornamental decorations typical of ancient Eastern and Middle Eastern gods, are reinterpreted in a contemporary key. The hypnotic power of these jewels, which base their structure around the construction of a gaze "detached from the eye", bring to mind what Roger Caillois calls the eye-spots in animals that assume mimetic attitudes: "Similar to disproportionately sized eyes, the eye-spots capture the gaze of the predator or of the victim ... with a paralysing effect".

The same idea of concealing and revealing belongs to ‘the Bead Curtains’ masks by Carina Shoshtary, which can be characterised as emotional, imaginative and innovative. 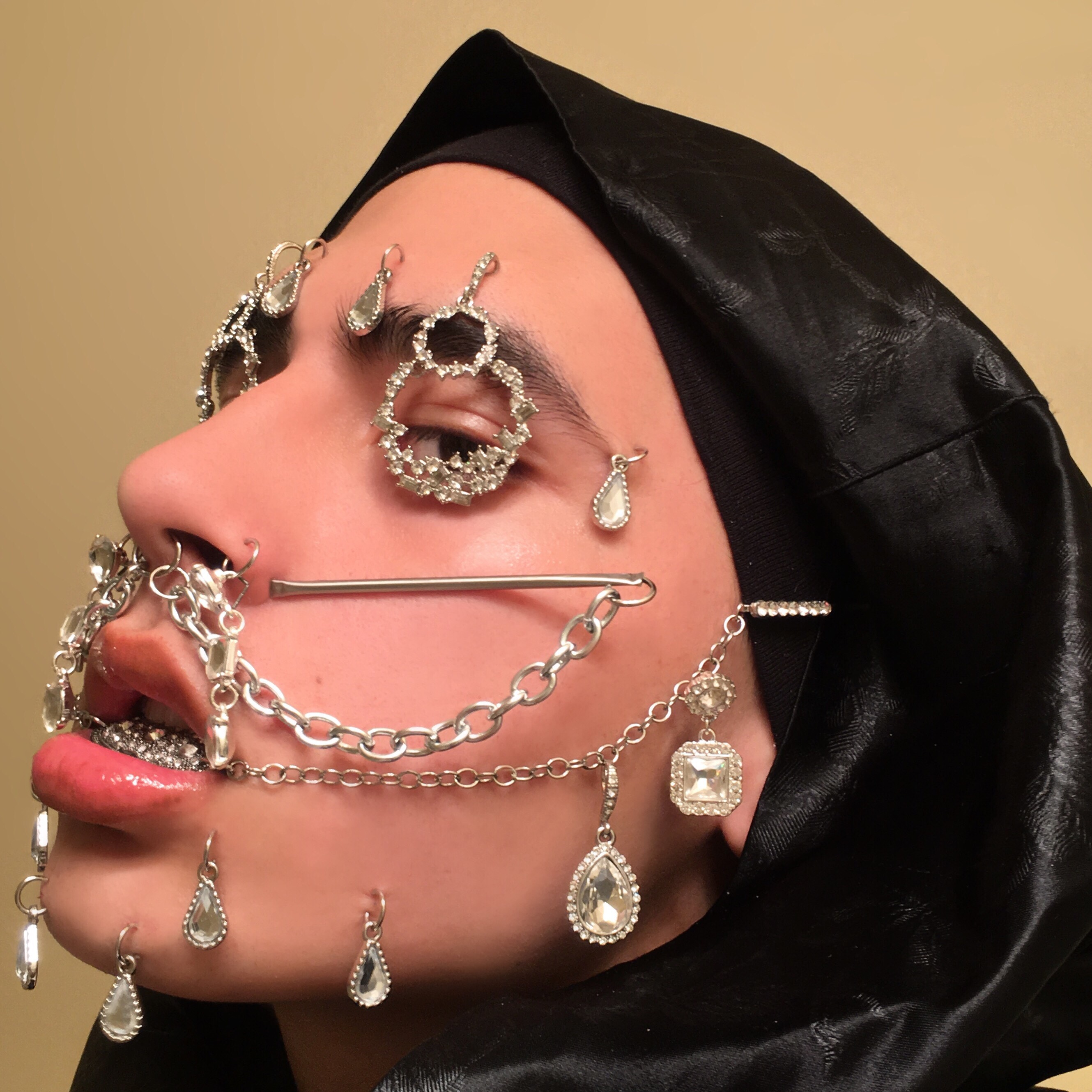 She describes herself as a kind of modern hunter-gatherer as she finds the materials for her artworks in her immediate surroundings. Her choice of materials is often unusual: colourful graffiti from heavily sprayed walls, old bobbin lace found in a cellar, the plastic nets of shower sponges. With scientific curiosity and sensitive intuition, Shoshtary reveals the potential of these materials.

‘The Bead Curtains’ are like loosening up pieces for her while working on a major projects and research. She actually went back to using materials she used more than a decade ago, such as plastic rosette brooches and beads.

She also creates, through these pieces, an animated superstructure of the glance, thus generating both alienation and fascination in the observer. 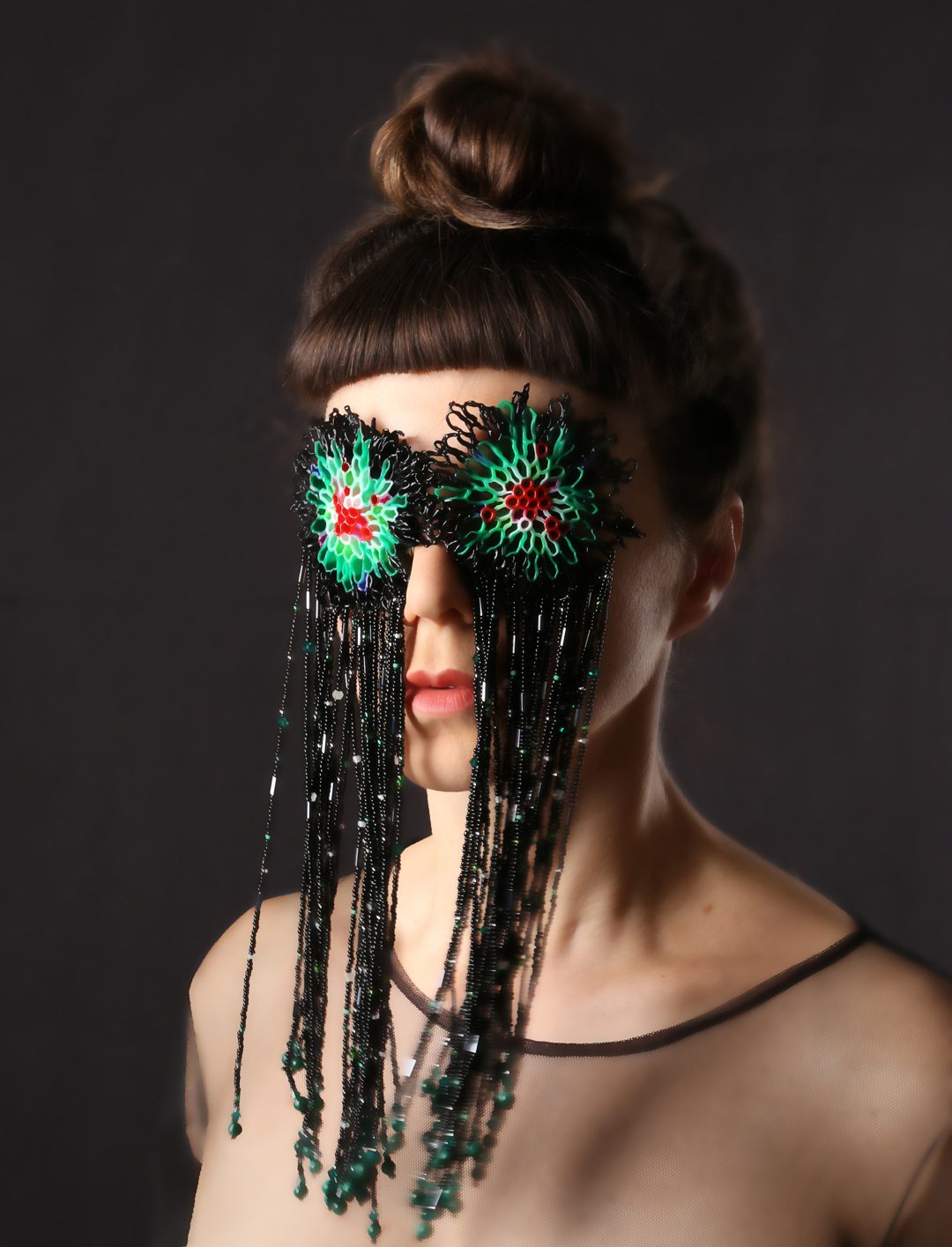 Examples of face decoration that enhance aesthetic research in a twofold direction, historical and traditional on the one hand, innovative on the other, between art, ornament and technology, are the works of Laura Estrada and Joanne. T.

Joanne. T created a collection of facial ornaments inspired by radical tribal jewellery and aims to combat the media’s idealisation of beauty and the modern obsession with plastic surgery that pervades society. The jewellery allows wearers to customise their appearance at will, empowering them through enhancement rather than modification of their natural features.

In the same way, Laura Estrada’s creations for the face are a kind of ritual adornment that empowers the wearer in their chosen form of identity and individuality. 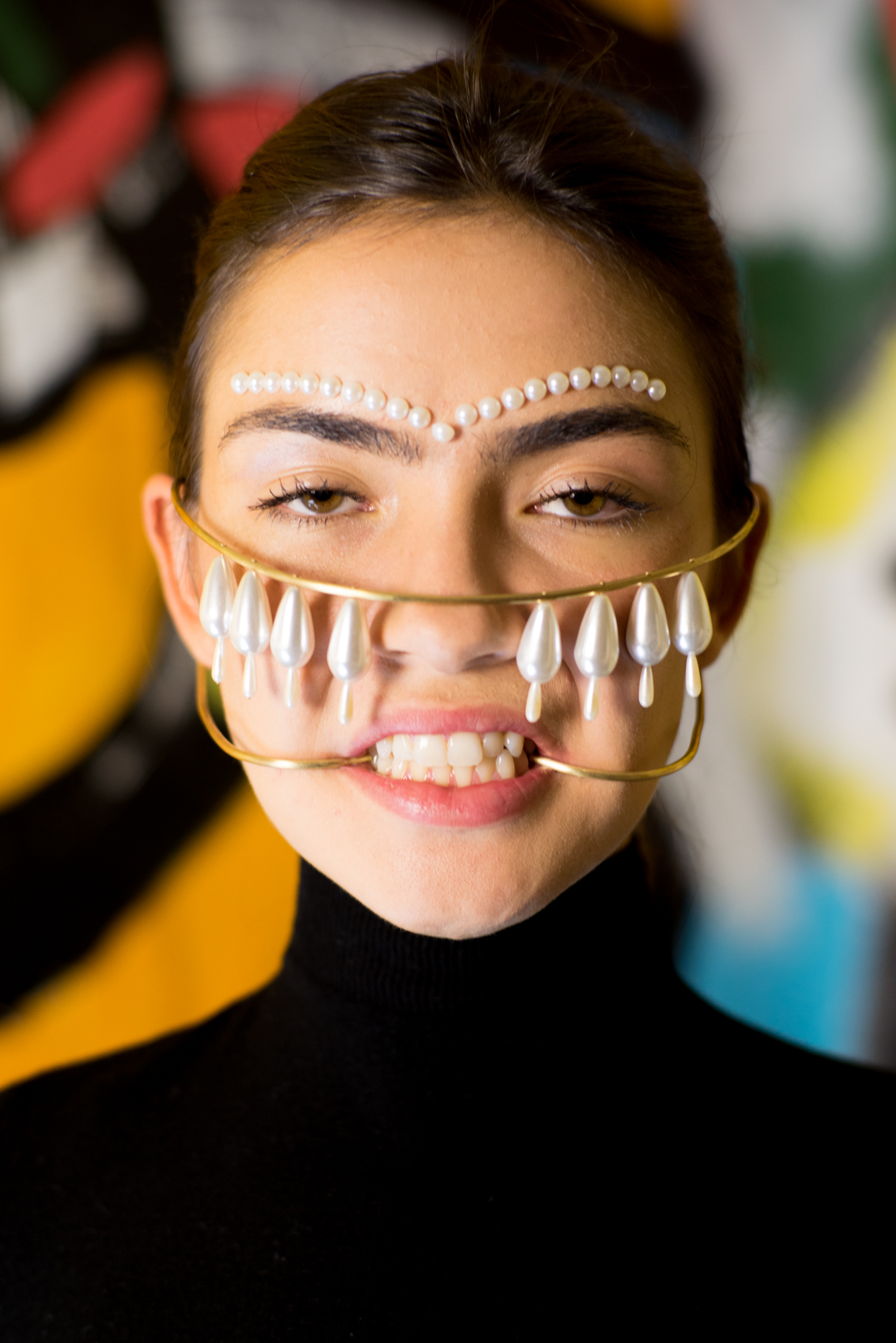 Looked at correctly, new technologies represent the stimulus for the development of a new facial aesthetic, but above all they become the principal medium, determining the modalities, language and content itself.

The work of artists such as Damselfrau, Cupid’s Vault and Thread Stories take on life and meaning precisely when it is published and shared on social media, generating in the observer the sense of dizziness, rapture and estrangement of which Caillois speaks.

Cupid is a makeup artist who is not afraid of experimentation. His work consists of the creation of endless obsessive self portraits and representations, using precious and non-

precious materials, organic substances and plastic, fake piercings and hair. The result is the visual sequence of the same face expressed in its infinite possibilities and intimate expressions.

Damselfrau, the paradoxical and provocative pseudonym adopted by artist Magnhild Kennedy, has made pieces for artists such as Mø and Beyoncé, and collaborated with Alister Mackie and Louis Vuitton. Beads, glass, lace, textiles, paint, hair, paper: everything and anything can be included in one of her creations.

“A mask isn’t finished until I have taken a portrait of it and sent it out on general internet high-ways like my Instagram or Blogspot. This way the mask makes a life of its own and communicates its own being. It’s how it has turned into actual work” she stated in one of the latest interviews for Designboom. 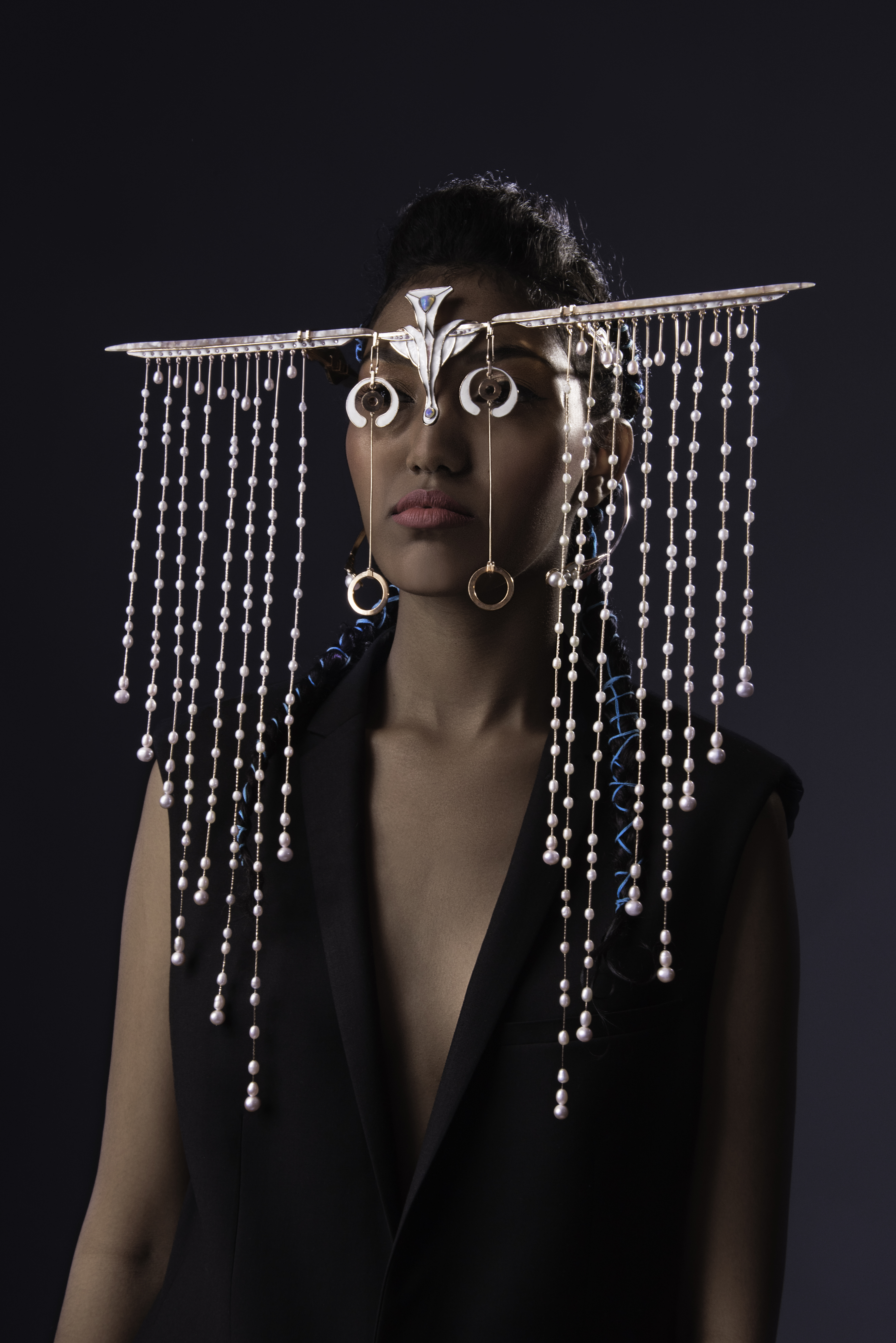 The line between visual art and digital performance becomes even slimmer in the work of Thread Stories, an Irish visual artist who produces wearable art objects. The artist uses a variety of techniques to produce malleable and draped textile masks, which obscure and transform the wearer. Once the masks are activated by the wearer they are either photographed or captured on film and shared primarily via Instagram. The documentation of the masks comments on privacy and manipulated imagery in the age of social media, and it is in the meeting between video or photos, between performance and social networks, that this new digital tribe finds its own expressive channel.

After all, the profound meaning of the use of decoration and disguise has not changed so much over the centuries. Man decorates himself to communicate, to frighten, both to hide and to reveal, to declare belonging and to perform a profound, archetypal and meaningful act.