A Letter From Seoul

Following much perpetuated hype from youth-centric media outlets on why moving to foreign climes is the “coolest” thing to do, NJAL applies a critical eye on what it means to decamp your homegrown roots for a distant realm as an independent creative. NJAL couldn't think of a better way to separate fact from folklore by simply handing it over to NJAL’s global cadre of creatives. Today, Sandra Meynier Kang of SMK writes a letter from Seoul, to detail the realities of leaving Paris for Korea, its cultural complexities, curious exoticism, and how it's challenged and favoured her practice.

Seoul, a city of a captivating clash between modernity, tradition and lights. So many lights and noises, roaming days and nights. The sun rises at 5am, and my mornings usually start at 7.30, getting ready with some energising yoga every single day, before hitting the streets, through Gangnam gu, then Sinsa Dong, grabbing my Iced Cappuccino at the Laybricks (my favourite coffee haunt).

My name is Sandra Meynier; I was born in France and grew up in a very peaceful Parisian west suburb, and back then, it was extremely far removed from fashion. After high school and attempt to study languages at Paris La sorbonne Nouvelle University, I found that academia was just not for me. I have to admit that I was a truanting student, and I always skipping out on classes. I finally started at the renowned school of design, The Atelier Chardon Savard in Paris where I got my stylist-modelist degree and graduated in the year 2008. 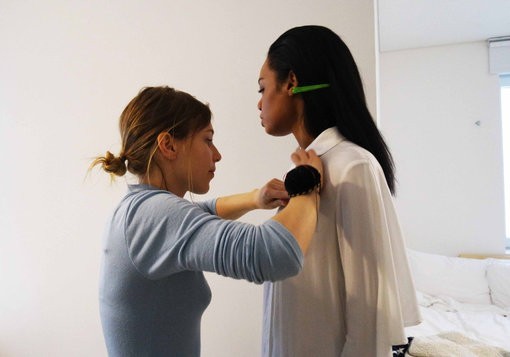 After graduating, I started to work for a leather jacket company in France as a womenswear collection designer, marketer and production supervisor. During a summer vacation, I unexpectedly landed in Korea, following my own intuition to challenge myself. I suggested to my boss to sell the collection in Seoul. Within a month, it was a huge success. I do believe it was really just down to luck where all these great things were happening all at once. I ended up becoming an agent in Korea for several French brands. It eventually turned to bankruptcy for many of these brands pretty quickly, as I struggled with the reality of adapting to the limitations of the Korean market. While all this unfolded, I had my routines. I sipped my Green Tea Latte systematically, with alternating round trips to Japan every so often, and then back to France to renew my three months visa.

After another stroke of luck, I was hired by one of my friends Kim Hong Bum, designer and director of fellow NJAL designer, Cres E Dim, to work as an overseas marketing manager at his company. He was the one who also helped me to launch my very first collection in Spring/Summer 2012 here in Korea. At was at this point in my life, my career and my ambitions, where I began to face a reoccurring question of whether I was losing motivation to go out on my own and design under my own name. I really questioned and doubted my motivation, and whether I actually had the guts to create a brand, in Korea, with no money, no visa and being barely able to speak the language? However, since Hongbum had taken me under his wing, the answer was pretty clear–yes, yes, yes. 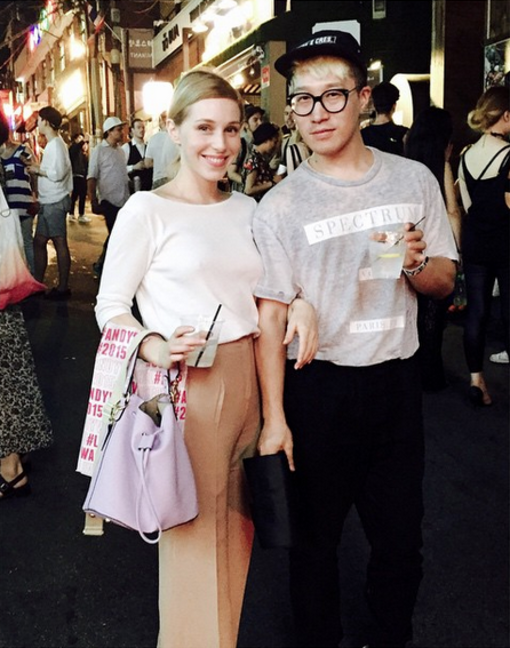 This is how ‘Yesimfrench’ was born. It really came into fruition at a time when Hongbum’s own design star was on the rise, and he became really famous in Korea, and a little too busy to be able to stay by my side. As I worked for him, as an overseas marketing manager for a year, it gave me enough time to give birth to my own independent brand on the side. I got my first studio in an open space in Sinsa Dong, on the corner of the lively Garosu Gil Street, thanks to the help of another great friend. I have to admit that since I started this adventure, I’ve felt as though I’m shining under some lucky star, or some kind of Lady Luck watching my steps from above, putting on my path the right people exactly in time when I needed a hand. Was it what we call fate? 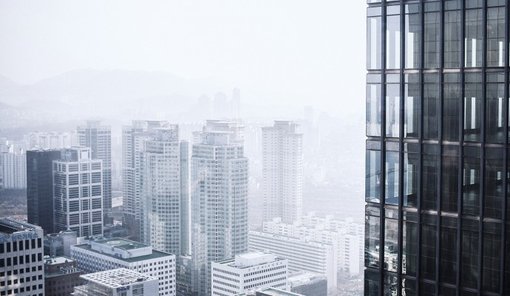 Surfing on the wave of these new opportunities, I also took part in a Korean fashion contest and TV show called "Top Designer" hosted by DOOTA department store. Department stores have quite some clout here in Korea. It was such an incredible experience. I was the only foreign candidate. As my Korean language skills weren’t exactly polished, I could approximately understand around half of what was going on. Recalling it now, when it was my turn to climb on stage and to receive critique from the judges, such as famous Korean designers Lee Sang Bong, and Metrocity director Yang Jihae, I could barely understand anything they said. I was trying to take in as much information as possible, and I reckon that my time spent refining my language skills for the show took me longer than the work on the outfits themselves.

After this brief but intense experience, I focused on my label Yesimfrench and began to reach international markets, and sell more outside of Korea. I realised that this name was not suitable with what I wanted to express through my collections and with my overall outlook on life. I felt the need of a more neutral name to be able to address about any subject, issue, or inspiration that would come across my road, and also get rid of the territory notion. I believe that fashion should never have so why should I limit my own brand name to such a culturally confined space? In turn, S M K was born. How did I launch my company in Korea? I worked closely with a lady who launched her own sample room several years ago in Sindang Dong; a north East district of Seoul. She accepted me as partner even when my Korean was still very sketchy. Nowadays, we understand each other perfectly, sharing good talks and coffees together. She is a brilliant partner, always working fast and always providing high quality work; we always discuss our prices, fixing our own rules. She is the best sample maker I have ever worked with.

My factory is about 10 km east of Seoul, in Janghandong; the director started ten years ago and is very supportive to young designers like me. Yet, working with me was a new challenge because of the language barrier, but he gave me a chance to make it happen and we have been working together ever since. I visit the factory every week and our during production periods, I often stop by to solve the issues we encounter and to check on the entire process. 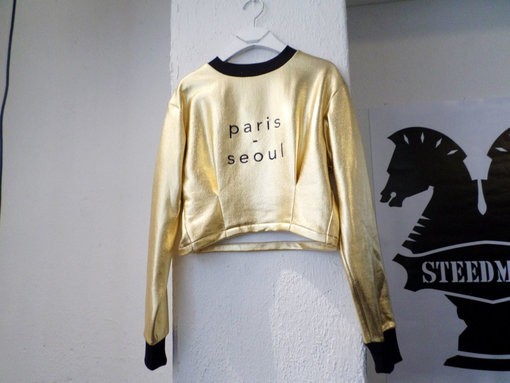 This is something great about Korea. People trust you, and always give you a chance, whatever your age, your citizenship or regardless of your experiences, you really can build your own chances, and let the magic happen. I know exactly know who makes my clothes and how they do it. My supply chain is completely transparent, and I am able to build these good relationships on a daily basis, and the result is always matches my expectations. If there is a mistake or something to be fixed, it takes less than 48 hours. It’s a real exchange between them and I; and honestly, without their skills and talents; I wouldn’t be able to create these collections. They are essential to S M K.

What’s really been on my mind for the past two years is sustainability and really trying to understand how to be a sustainable fashion brand in a country like Korea. I’ve always had design principles: the first one is never using any animal skin such as leather nor fur. More specifically, defining my own professional identity and following my own personal values is important for me to question, and how I feel about using some plastic or chemical materials. These are all things that harm the environment so where is the line? Considering these things lead me to focus on using Korean fabrics only, and carefully choosing the ones produced with minimal chemicals. For me, eco-friendly and ethical decisions should be made at our own "scale", embracing the reality and responsibility but also the demand of the market. I've never wanted to do fashion just for fashion’s sake either, and I ensure that 5% of all proceeds from each of my collections goes to a different charity to help them with their mission. 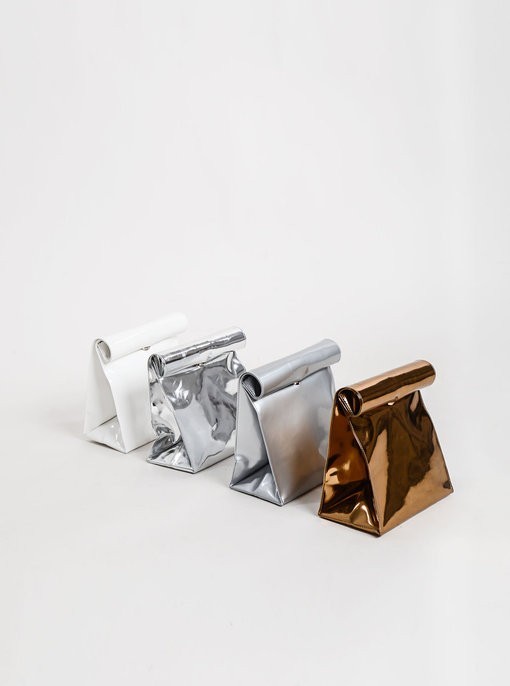 Korea is really fast. And I mean really, really fast. It is actually one of their mottos here " 빨리 빨리" (Bballi bballi which loosely translates to hurry hurry) and there’s not a single day that you don’t hear these words! It’s a value respected everywhere, from the supermarket, to the factory, literally anywhere. I even believe that times goes faster here. When I travel to Europe to visit my family and friends, I somehow have the feeling that time runs slower in Europe. I’m also a fast-paced person, and suited to this particular Korean sensibility and I’ve become very familiar with the flow of practising the 빨리 빨리 in my own company. It suits me well.

I have to say that Korean pattern makers are incredibly talented and work with great precision. Most of them train in Japan or learn from Japanese masters, and we still use a lot of Japanese words in the factory and production process for example. They are very logical and methodological in their approach, and I’ve learned so much from them over the years. I’m not exactly sure how to finish that letter; maybe just by inviting you to visit Korea, and experience the buzz, thrill and utter shock this megalopolis has to offer.