We’re constantly inspired by our peers at work within the fashion industry. From designers pushing into a new frontier of sustainability to the individuals focused on tech-centric innovation, we’re surrounded by the pinnacle of creativity. Case in point: Iris Alonzo.

From her tenure spent at American Apparel—where she served as the Creative Director for the company—to her budding brand EVERYBODY.WORLD, Iris’ story and larger ethos around sustainability is a testament to the self-starter spirit this industry celebrates, if not relies on.

We recently got the chance to sit down with Iris and pick her brain on all things fashion, sustainability, ethical responsibility, and so much more. In the first installment of this series, we hone in on Iris’ beginnings in the world of fashion and how her early years continue to shape the way she approaches the industry today. 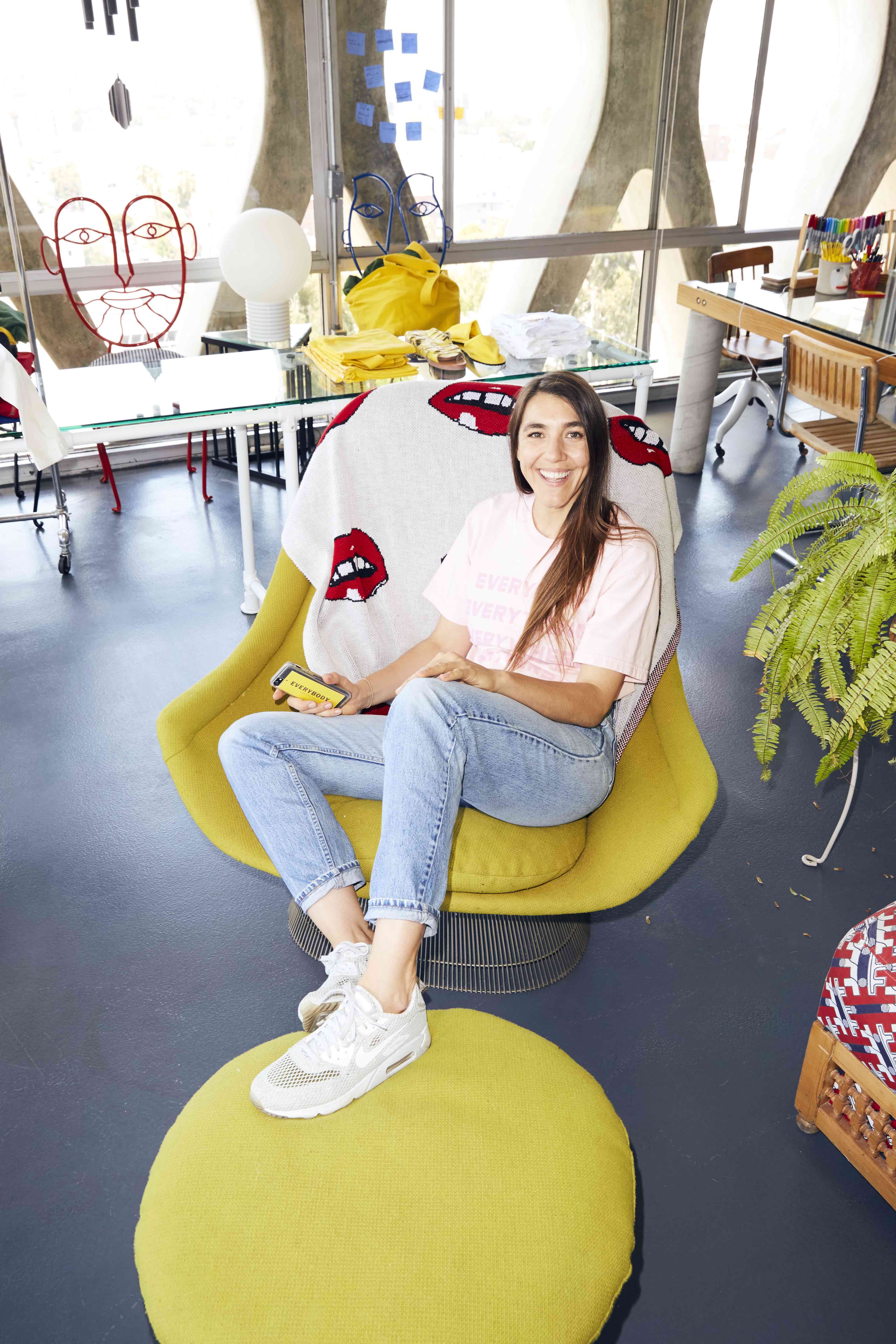 Every illustrious career starts somewhere. Multi-talented and interested in all things creative, Iris tested out various avenues before settling on fashion.

I started working with I was around twenty years old—one of my first jobs was an internship at Nylon magazine when they were still based in LA and operating from a hotel room at The Standard in Hollywood. That was sort of my first real world experience working in fashion or at least fashion adjacent. I always knew that I kind of wanted to be involved with something that was related to apparel but I didn’t know what. I loved publishing; I loved all creative industries. After Nylon, I became a photo agent. I was representing photographers—so that was also fashion adjacent but it was more on the backend, which I do like. And eventually I started working for this streetwear label called Freshjive by Rick Klotz. Then I went to American Apparel and was the creative director there for 11 years and now I’m here.

American Apparel was at the epicenter of a cultural movement within fashion. Deep v-necks, soft hoodies, hotpants in metallic colors. As an early employee, Iris travelled all over the world and was instrumental in helping the brand find its footing.

I was in my early 20s and had all the energy in the world. I was working for a very quickly growing startup, basically. When I started at American Apparel, Dov had just experimented with a few stores. American Apparel had really just been a wholesale company selling to the customizable market, and he had just started testing a store. Once he realized it worked, my job was focused on expanding that realm.  He essentially said, "Okay, this thing works. Now what you're going to do is pick the coolest cities in the world to put our stores in." I didn't come back to LA for two years—it was crazy.

I came back 2 years later and all of my boxes were covered in dust. I went everywhere: from Paris to Stockholm to all over Japan, to Korea to New York to Montreal—it was just looking for stores, scouting people on the street and being like, “hey you seem interesting, you have good taste, I can tell you're an interesting creative person, do you want to be involved in this cool brand?” and then basically hand them the keys to the store. It was crazy but also amazing. It was interesting because it was all of these young people being given incredible opportunities.

This young person I met on the street in Amsterdam was running a 4 million euro business. Opportunities like that were—and still are—special. The spirit was focused on finding young people. That being said, it didn't even have to be young people, but it just worked out that way because we were working with smaller budgets. We operated under the mindeset of finding interesting creatives, giving them opportunities, and then seeing where they would take it.

The day-to-day at American Apparel found Iris working in a factory, soaking up the hustle and bustle of a growing company where creative voices were nurtured and valued.

I worked in a factory every day for 11 years. We had almost 4,000 manufacturing employees in one place, so it was really like being on a college campus every single day. You know a lot of people by name, but you also just know everyone. It’s like being at the same school for 11 years where you really, deeply know everyone. It was a family environment. There were people dating from different departments, and it was really tight-knit—you would see it constantly. There was a huge cafeteria, which was really fun; there was always music playing and birthday parties and all kinds of celebrations. That environment changed the notion of factories. When people think of factories they usually think of a sweatshop environment or something maybe more industrial, but this was more about people. And that's what it kind of came down to.

We did so much there—it was a vertically integrated company. We were involved in every single step of the process, which is one of the few ways you can really, truly control the quality of your business and ensure that you're not supporting exploitative situations. So it was really eye-opening in that way. It was also super crazy.

Her time at American Apparel instilled a larger set of values and expectations in terms of manufacturing and running a business. American Apparel founder, Dov Charney, constantly pushed for higher standards in terms of ethical manufacturing. His ideals not only helped to reshape the conversation, but also provided a valuable foundation for all involved with the company.

Dov’s dedication to ethical manufacturing practices was a no-brainer. Not only was it the right thing to do—he wasn't doing this to run a charity— he was doing it because he believed and I believed that it is better business to treat people well. You know, people that are working for you—whether it’s in an office at a creative agency or working at a sewing machine, if they're happy they will do better work for you. So that was his philosophy. He always said we leverage technology and design to advance our business; we do not rely on exploiting low wages in other countries. People at American Apparel were making up to $25 an hour for sewing, which is not a lot of money in the context of the world, but it is a lot of money in the context of the garment industry—it’s a ton of money, actually. And it was a living wage. And that was only through technology and efficiency that we were able to get it to that point.

It was about creating a brand so interesting that you could afford to pay workers fair wages.

Creating a brand that is interesting enough that consumers will pay more money for product is obviously much easier said than done. But it's this idea that stuck with Iris. After years working at American Apparel, Iris took some time to fully think about what it is she wanted to do next. Focusing on what mattered most to her, she started EVERYBODY.WORLD with American Apparel comrade Carolina Crespo. In part two, we'll learn more about the driving forces behind EVERYBODY.WORLD and what it truly takes to commit to sustainability with a start-up mentality.