There are very few designers today with the enduring iconicity that the name Hussein Chalayan commands. Ever since his breakthrough graduate collection in 1993, Chalayan has been carving out his own identity while eschewing convention. Following his appointment as Head of Fashion at the University of Applied Arts Vienna, the cerebral designer has spent the past year guiding the next generation of fashion talent to hone and discover their own skills

Hussein Chalayan MBE has always pioneered an intellectual approach to fashion without compromise, balancing performance art and power dressing with a unique spin on femininity. You'll find composition and silhouette at the very crux of each design, all of which strike a delicate balance in his concept/commerce equilibrium.

There aren’t too many designers who have flirted between the worlds of fashion and art with such fludity but Chalayan has pursued careers in both industries, with equal success. As an artist, he represented Turkey at the Venice Biennale in 2005. As a designer, he is acclaimed as one of the most daring, elaborate and intellectual visionaries fashion has ever produced. His work has been exhibited extensively, from London’s Design Museum to the Musée des Arts Décoratifs in Paris and an array of published books. 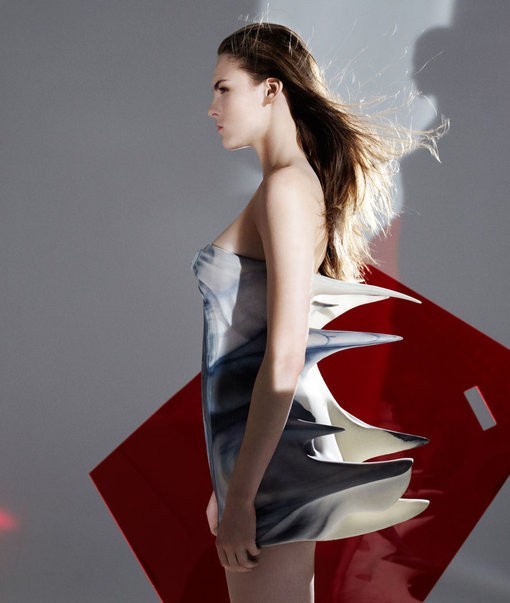 Chalayan refuses to compromise, and it’s an iron position that in some vein of irony has afforded him the flexibility to flex his creativity without bounds. It’s a career that began explosively, following his graduate collection at Central Saint Martins, entitled “The Tangent Flows,”. This was the collection containing clothing that he had buried in the ground and then exhumed, to present on the runway in a ritual of resurrection. While it provoked horror, shock, and outrage–it also attracted the attention of influential London boutique Browns, who displayed the collection in its windows within a storm of critical uncertainty.

Today, Hussein Chalayan speaks exclusively to NJAL on his first year as Head of Fashion at The Angewandte and what it’s like to stand steadfast in the face of criticism, take risk after risk, as well as create and cultivate desirability. Plus, some invaluable advice for aspiring designers from the visionary who has always known his worth, rejected the claustrophobic categories of artist and designer while fiercely defending the integrity of ideas with full force.

Congratulations on your first academic year as professor of fashion at the Universität für Angewandte Kunst – The Angewandte – in Vienna. What’s this year been like? Did you ever teach before?

I have taught before but only on a project basis. This year has been an adjustment year for me to understand how the system at Angewandte works, to understand the mind-set of our students and how to work with the team.

Has it become too difficult to establish a fashion label today?

Following previous recessions, there was sometimes not a lot going in fashion, especially in cultural capitals like london. In a contemporary context, so many independent labels have managed to survive the recession but remain stunted in growth. There doesn’t seem to be any room to grow.

Why do you think so many of the illustrious labels that define London’s legacy of fashion such as Alexander McQueen and your own brand rose to glory in the 1990s?

In the 90s there was a gap after the boom in the 80s, and there was simply room to have new designers making new works in London. More importantly, I think we took risks and made work that challenged social and sexual mainstreams, even though the mine and Alexander McQueen’s respective styles were very different.

What’s your biggest goal in your role in Vienna?

The goal is to share my years of experience, and help the students discover what they are good at and how they can turn their skills into a livelihood after they graduate.

When you were a student, what were your expectations for the industry you were about to be catapulted into?

I had no expectations and that was exactly how I wanted it. It’s a way of thinking that means I can enjoy every moment without worrying about the future. My opinion on this is to live the moment but slowly prepare for the future. 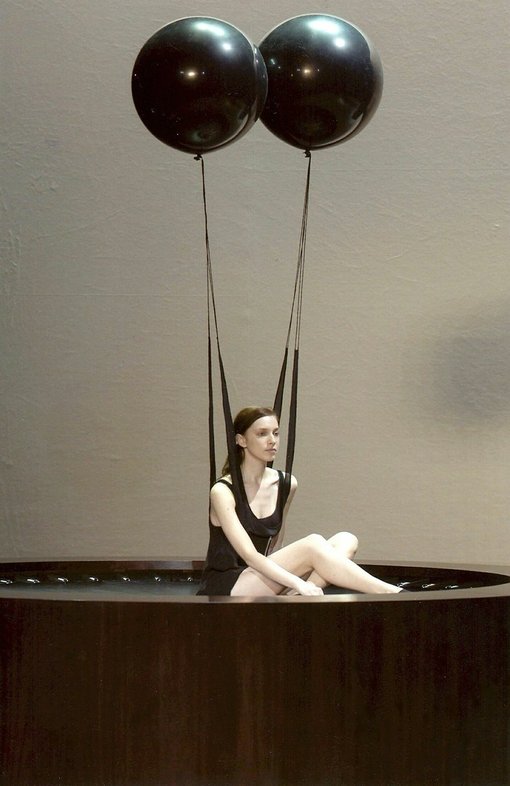 You’ve had a parallel career as an artist for years and your own aesthetic effortlessly collapses any notion of category altogether. If fashion is interdisciplinary by nature, why is there such little interaction between different creative disciplines and departments within these institutions? Is this something you’ve addressed in your role this past year?

Fashion is not necessarily interdisciplinary for everyone and that is not a problem. However, for me fashion can become more interesting and can look newer if it can interact with other worlds, as it always seems to be a self-referential entity. In time, I hope that I can help different departments at Angewandte collaborate meaningfully and not just for the sake of it.

You’ve previously said the best thing you could do is not have your own brand. That’s the idealistic of goal of most young designers as well as the equally as romanticised idea of being taken up by mega-conglomerates. What do you tell your students to do and how important is it to connect them to the industry during education?

I think the whole point in fashion education should be about the luxury of getting to know what you are good at and that does not mean necessarily setting up your own brand straight away after graduating.

There are many areas in fashion like styling, photography etc that can be at times more lucrative than being a designer. Also, as a designer–having an important role in a company and exercising teamwork is as important as having your own brand, especially if you can see the fruits of your input.

However, all that being said–I would be very excited to see graduates setting up on their own, but my message would be to get experience first as being an independent requires an understanding of how the system at large works. A lot of sacrifice, tenacity, patience and responsibility are necessary and not everyone is cut out for this. 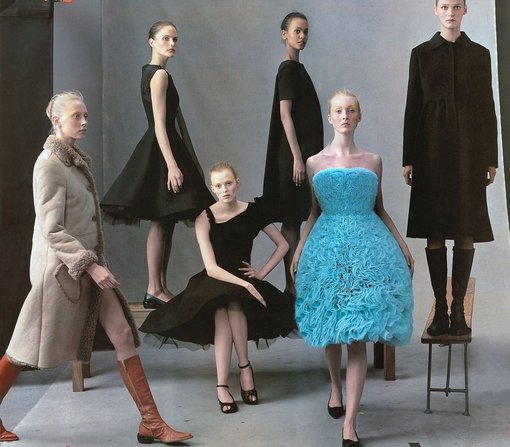 The secret to commercial success in contemporary fashion is incredibly sought after. What do you tell your students about this?

In this light, for me the foremost is being able to create desirability and not just cultivate and display creativity. Secondly, it’s about knowing who you are designing for, even if it means also creating a new client base which doesn’t readily exist. These days, commercial success is also very much based on the power of celebrity, price and most importantly digital media. However, commercial success remains transient and we have to remember that what does well now, may not do well tomorrow.

Do you think its possible to teach your students how to experiment and change boundaries in the contemporary age of fashion?

Experimentation and boundary breaking is possible to teach to some extent, but first it requires students to develop their own skills at all levels–including technical and communication skills before embarking on shifting boundaries.

What is your advice for young designers?

My advice would be that that if you want to succeed–you need to focus, be ready to sacrifice with an incredible amount of hard work and develop excellent communication and networking skills all whilst watching your wallet.

How would you describe your own work and its evolution to date in tandem with all the experiences you’ve lived?

It’s a miracle that a brand like mine has survived as an independent.

How do you incorporate technology into your work?

We all think of technology as new fibres, a digital world, and motors wires etc. and it’s a broad category to conceptualise. I feel that all forms of technology is the only ingredient left to create newer work, and for me  ‘technique’ does not necessarily mean all the above. Technology can also be the revisiting of ancient methods and a way of thinking that can create an entirely new angle in itself with an endless array of possibilities. 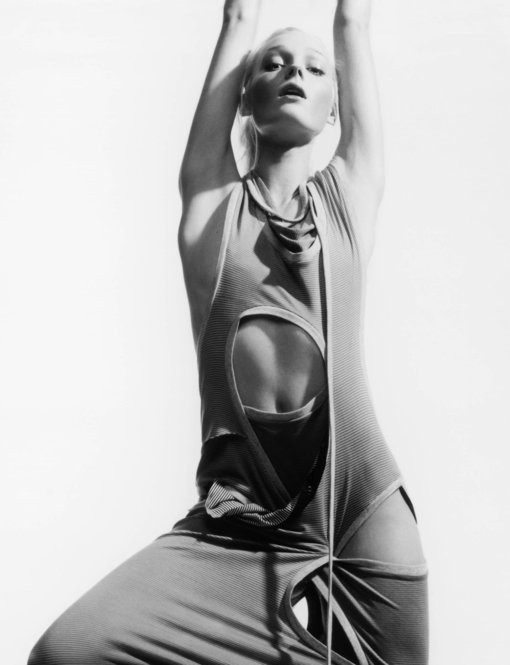 Beyond your namesake collections and work at Vionnet, are there any new works as a multidisciplinary artist we can look forward to?

Yes.  I am authoring a dance piece titled Gravity Fatigue at the Saddlers Wells in London–showing from 28th-31st of October this year. I will be combining the visuality and concepts behind my designs with contemporary dance to bring to life a transformational imaginary world. I have worked with award-winning choreographer Damien Jalet (Babel), and the production takes its inspiration from themes of identity and displacement and the disconnection we experience in public spaces at moments of transition. Plus, you’ll hear about another exciting project that we’ll announce very soon.