How Can Emerging Designers Beat the Fashion System?

It’s no secret that the fashion industry is currently in a total state of flux. With the explosion of social media and the dizzying speeds with which we consume fashion in a digital age, comes immense pressure on brands and designers to keep up.

Consequentially, we have witnessed the departures of some of the biggest names in fashion: Raf Simons gave up the reigns at Dior and Alber Elbaz took his bow as creative director at Lanvin. Since these highly symbolic walkouts, the fashion industry has spiralled into a media-perpetuated hype of dramatic finger-pointing and self-indulgent catastrophizing. Click-bait headlines and hyperbole aside, is the industry really ‘in crisis’? Or is it just in need of some serious reform? How can young designers navigate the industry’s recent tectonic shifts and implement the changes we all want to see?

If you think about the course of fashion over the last year, disregarding Vetements mania, there has been nothing else that has dominated industry conversation quite like discussions about the industry itself. I would like to acknowledge the self-irony here; I am aware that this article is, of course, another voice in the over-saturated debate. Indeed, it seems next to impossible to work in fashion without being steeped in the conversation as to what is wrong with the industry and how we can change it. The unsustainability of fast fashion, the validity of the fashion week schedule, the introduction of see-now-buy-now shows; everything is up for debate. Dare I say that the topic is erring dangerously on the side of overkill? It has become a case of less talk more action. 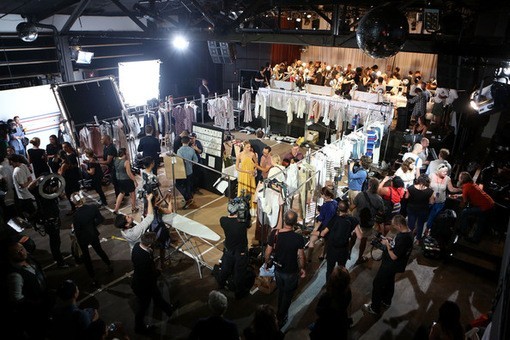 Furthermore, the dialectic is almost always focused on the big fashion houses and levelled at a macro-level approach of looking at the industry. Not much thought seems to be being given to the idea that the change could and should come from the ground up. Post-Brexit, the political apathy of today’s youth in Britain has prickled painfully to the surface. If only more young people ventured to make their voices heard, perhaps the big dogs at the top would start listening. Apathy lulls you into a state of inaction, when what we really need is direct combat. The same issue of apathy in the broader political spectrum can also be applied to the little old fashion industry. There have been countless opinion pieces in which young designers have voiced dissatisfaction, frustration and even disgust at the fashion system yet too often these words don’t seem to manifest themselves in their collections. Young designers are afraid that if they speak out too much, the system will reject them. NJAL designer Martine Jarlgaard points out that while sustainability can be a USP for a young brand, she is afraid to push these values too much for fear of it overshadowing her design aesthetic. “The situation is double sided because ethical awareness is often seen as uncool in an industry based on glamour and a fast paced lifestyle,” she bemoans. 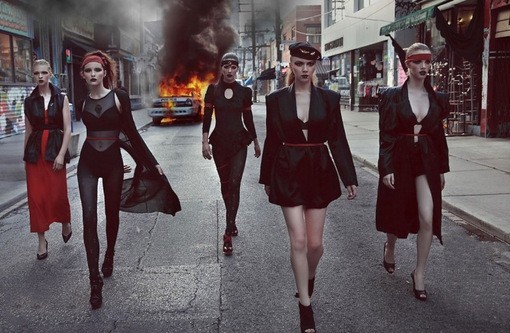 When considering the protean landscape of fashion at present and the hegemonic power of fashion conglomerates, it would seem that resistance for young brands is futile. Eugene Rabkin, editor of StyleZeitgeist magazine highlights the painful truth that it is predominantly those with money and connections that are making it in the increasingly overheated fashion climate. “Make no mistake, the supposed mavericks of fashion, like Vetements, did not succeed by somehow being outsiders- that's a myth. They are well-funded and sleek and know how to play the game. Many of the so-called independent designers that have runway shows, especially those who show in London, such as Mary Kantratzou and Simone Rocha, come from family money.” Lotta Volkova, the Vetements super-stylist expressed a notable lack of disdain for the fashion system in a recent interview with 032c, a comment that seems a little discordant coming from the supposed rebel of the fashion world. “We need the system. We just want to do what we enjoy doing. The system helps us do that.” Indeed. Perhaps it isn’t so outlandish to suggest that the system is literally designed to keep those positioned at the upper echelons of the industry firmly in place and to prevent those at the bottom from rising up. 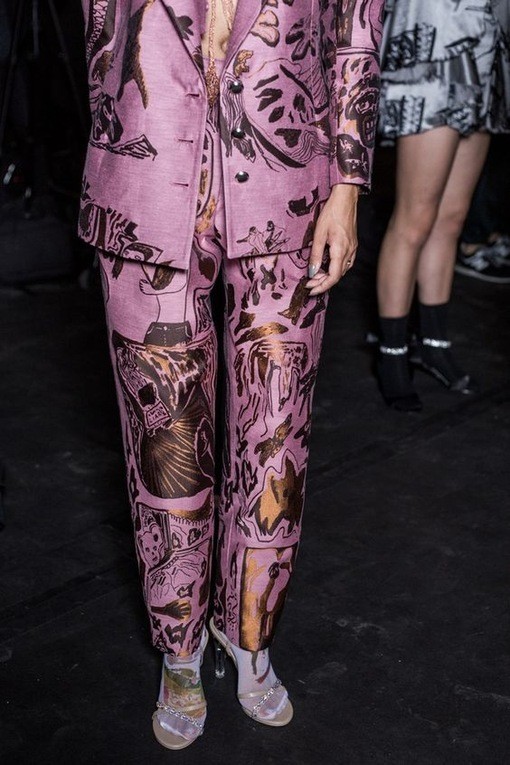 However, all is not lost. It’s easy to get caught up in the idea that the ‘system is broken’, but first we must consider whether we even need it to be fixed. The only reason the big fashion houses are floundering in the midst of the social media storm is that their business models were built before the digital revolution and they are having to find ways to adapt. The doctrinal season model, to which the power houses have adhered to for decades, no longer upholds in a globalised world of hyper-connectivity, instantaneity and a seasonless collective consciousness. Big brands are scared, they have too much at stake and they can’t implement changes on a small scale without impacting on the vast makeup of their businesses. Jean Touitou, creative director of French label APC, seconds this motion; “the big houses, they are totally disorganised, they don't know how to take risk, they are too big.” In a way they are just like the elderly electorate who voted leave in the referendum because they would like things to just go back to the way they were. 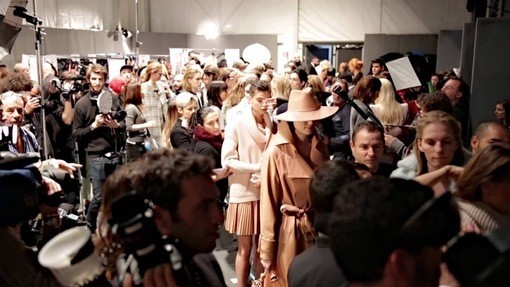 Since fashion is an industry steeped in tradition, and the storied fashion houses represent everything fashion has always been about, it’s very hard to resist the notion that in order for a young designer to succeed, they have to do everything in the same way. There is so much pressure on young designers to put on a show or presentation and so much time, money and energy is spent on achieving this goal when really it should be spent focusing on quality and building a strong design signature. Falling slave to a system that allows no space for creative renewal, when you are a young designer still learning to communicate your aesthetic language is a fool’s errand. NJAL designer Sadie Clayton backs up this notion from a practical standpoint, “the funds needed to meet fast turnaround times are much more than fit a young designers budget as we are often ‘fit in to’ production lines and cannot afford to pay for priority development and production.” Young designers are better off streamlining their collections and focusing on capsule collections. 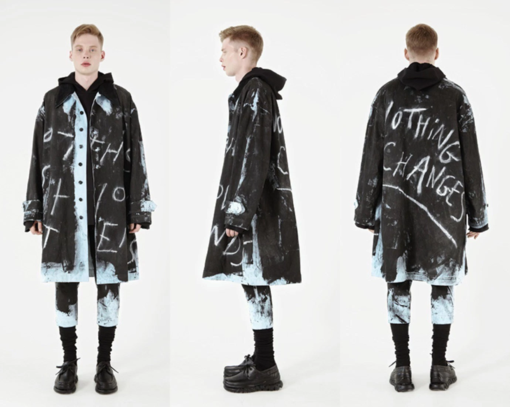 For the social media savvy new generation of designers; digital can provide a secret weapon. Sadie Clayton encourages other emerging designers to harness the power of social media as a branding tool, “there are so many avenues to market and to build brand awareness through digital and social media which enables [young designers] to own and control their messaging and brand identity.” Portugese brand Marques'Almeida have discovered an easy, effective and cost free method of communicating directly with their customers. Anyone on the brand’s email database receives hand written stories about the brand, stories of the people who work there, what they like to eat, what music they like to listen to etc. Receiving emails that create a personalised experience, rather than geared by e-commerce has proved an effective way of making consumers connect with a brand. Statistics show that today’s average consumer spends more of their disposable income on experiences than material goods. Giving consumers authentic experiences will allow them to feel part of a tribe. For Eugene Rabkin, this personalised approach is key, “the only way I see for a young designer to step outside of the system is to create a cult following.” 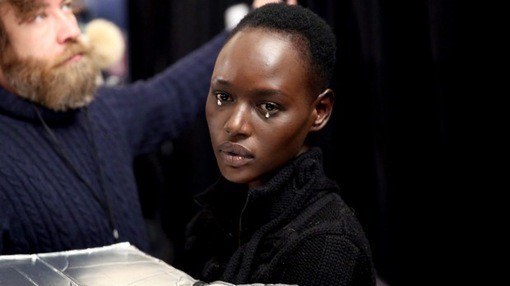 Young designers need to be radical in approaching the ways they might adapt and survive in the brave new world. As Orsola de Castro, founder of Fashion Revolution points out, “to be radical is to be a pioneer, and pioneers make their own points of reference.” The successful London designer Claire Barrow recently released a press release in which she announced that she “is looking to take the chance to really look at the way her work is presented and how she can develop in myriad ways, for the moment outside of the fashion week cycle." Let this be an encouragement to other designers thinking about taking the plunge. We are in times of great change; and change calls for innovation. Why not use Instagram as a form of presentation instead? Or look at other ways to reduce the costs of runway shows through technical innovation, by creating augmented reality enhanced look books or eliminating the costs of hiring multiple models by using just one model and creating a hologram. “Honestly this season I’ve been tempted to do a collection with only one dress just to make a statement,” asserts Martine Jarlgaard. This is exactly the sort of direct action the industry needs.

Yohjo Yamamoto, famous for his anti-fashion stance, once said that a designer should hate fashion because if they didn’t hate it they would never change it. The frustration that young designers feel towards the system needs to be channeled into powerful statements. Orsola de Castro encourages designers to find the antidote to apathy, “by collaborating, by innovating, by measuring success differently, by looking at growth in a more holistic, realistic, healthy way.”

Leaders are those with the courage to stand out. March to a different beat and you’ll have everyone following in your footsteps.