The fashion world is often portrayed as a place of glitz and glamour, excess, extravagance and excitement, where whimsical stories are created, culture is crafted and dreams are realised. Yet, beneath the surface of a designer's psyche lies a very dark secret. When the party is over, we’re left with an artist, unable to switch-off and trying to reach an unattainable high once again. It’s time we spoke about drugs, alcohol and depression in the fashion industry.

Alexander McQueen was found dead in his flat, after taking a mixture of cocaine, sleeping pills and tranquilisers. As shocking as this was, sadly, it wasn’t all that hard to understand. According to McQueen’s psychiatrist, he had been suffering from anxiety and depression for at least three years and had twice before taken an overdose as a ‘cry for help.’ His workload was believed to have had a direct effect on his mental state.

It is no secret that the ruthless fashion industry can drive many to break down. Think of Yves Saint Laurent who frequently turned to drugs and alcohol, barely being able to walk down the runway for the finale… or Galliano, who was fired from Dior for his racist rant. He later admitted to regularly downing bottles of vodka and taking pills to help him switch-off. Former Lanvin designer, Alber Elbaz, told British Vogue, “I don’t understand this marathon of fashion…you start to understand why some designers do strange things… you have to find a way of dealing with it all.”

Fashion used to run on a six-month cycle. Now, it’s been chopped in half and if you ask a designer at a major fashion house, it’s more like a three-week cycle. What’s, even more, troubling is the fact that the workload has largely increased despite the shrinking turnaround time. The fashion calendar is bursting. There are the haute couture shows in January and July, runway in Autumn and Spring, cruise collections twice a year and some houses do both men’s and womenswear. Add to that all other diffusion lines such as handbags and perfume and it’s a miracle if you’re not overworked.

But where does all the pressure come from? We live in an age where information is consumed at a much faster rate because of the Internet. Things seem old to us much faster, so there’s a constant demand for new things. Designers aim to keep up with demand and, in a way, are driving each other to take on more than they can handle, as they strive to keep up with competitors too. The industry is based on judgement and approval. Expectations from buyers, retailers, consumers, the media and the public are set very high. Pressure can also come from the designer’s own perfectionist personality.

This unhealthy amount of pressure must be causing a huge strain. No matter how hard they try, it’s virtually impossible to please everyone. You can’t help but wonder what affect this has on someone’s confidence. Galliano expressed these feelings in an interview with Vanity Fair: “I had all these voices in my head, asking so many questions. I was afraid to say no, I thought it showed weakness... I was going to end up in a mental asylum or six feet under.”

High pressure and expectation mixed with an impractical workload is clearly a potent recipe, driving many to substance abuse, anxiety and depression. For some reason, this damaging lifestyle is being undermined by the industry and shrugged off as being the norm. There is a tendency to glamourise unhealthy ideals—from burnt-out designers and underweight models to drink, take drugs and party hard.

I’ve experienced this blasé attitude myself while studying at university. I studied Fashion Design and by the third year, our tutors were eagerly telling us to forget about sleep, creating an atmosphere that made us feel guilty if we weren’t working every second of the day. If students of fashion are taught that this is normal, I can only imagine how ingrained it is in a professional designer’s mind.

Creative people have long been associated with mental illness. An image of the ‘tortured artist’ comes to mind. Does the creative industry attract such individuals or does it create them? Research would suggest the former. Creatives naturally think more about small details, making connections and re-playing things in their mind to better understand them. This way of thinking aids them in coming up with new and innovative ideas.

The thought pattern can become a problem, however, when applied to other areas of life, such as painful or stressful experiences. Playing a negative event over and over in your mind and wondering what you could have done differently is bound to lead to feelings of hopelessness and depression. Countless psychologists and psychiatrists agree that depression is amplified in those who tend to ruminate on their thoughts. So, the basic fact that rumination helps in creative thinking is also the factor that more readily exposes someone to depression. 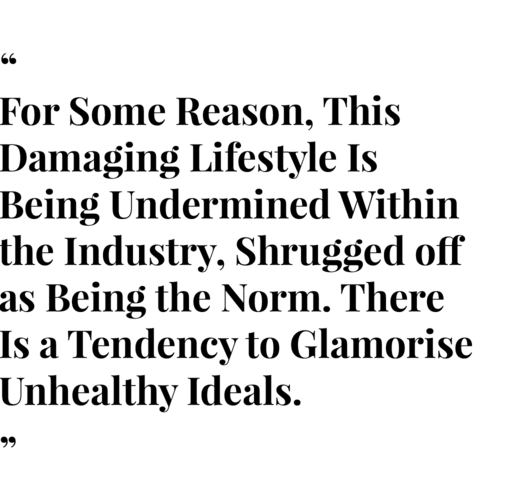 When we realise how overworked, anxious or depressed these designers may be, it begins to make a lot more sense why so many of them turn to alcohol and drugs to unwind; which in turn has been linked to many more serious mental illnesses. A 2015 study found that employees exceeding the EU working time of 48 hours per week were more likely to consume harmful levels of alcohol. Marc Jacobs has experienced this, having had to check into rehab twice so far, “I had been running around with models, stylists, fashion people, and I would spend nights drinking and partying.”

Not everyone seems to be concerned, however. Karl Lagerfeld points out, “If you are not a good bullfighter, don’t enter the arena. Fashion is a sport now: You have to run.” Rick Owens also agrees, “I don’t really see a problem: I tend to look at these things as evolutionary. I feel stimulated… and busy hands are happy hands.”

Although it’s relieving to hear that not every designer has suffered under the demands of the industry, should we ignore those who do? How many more tragedies have to take place before we address the issues?

For some, the fashion world got too much and they decided to take matters into their own hands. Viktor & Rolf, for example, left the fast-paced world of ready-to-wear to concentrate solely on couture, “The speed at which it has to be done does not help us. We are reflective people and we need time to create.” Tunisian designer Azzedine Alaïa has a similar approach, refusing to show as part of fashion week’s seasonal calendar. Instead, he presents whenever he feels his collections are ready.

If they can do it and still be successful brands then surely others can follow—especially if it means healthier, happier minds. Christopher Kane believes the secret to success is not in the pace but in an alliance between the creative and commercial cannons. He feels that more business orientated minds need to be attracted to fashion.

We may not need to change the whole system as it clearly works for some, like Karl, but those who find themselves at breaking point should be aware of other options. Fashion culture, as a whole, needs to stop thriving on unrealistic expectations and realise the damage it can cause. Designers should be able to work in a healthy environment, and not feel pressurised to keep up with constant competition.

As Justine Picardie, a biographer of Coco Chanel, once said, “People often think about fashion as if it’s just about the surface of things. But there’s often a very dark side to the life of a designer. The reason clothes are potent is because of what they are covering up.”