National attitudes towards style and beauty can be directly attributed to the long arms of politics, economics, culture and history. This is true that for every country in the world, Counter intuitively, the countries we can learn the most about by taking a closer look at how its people get dressed everyday, are those with the least to spend on lavish clothing, and the least at liberty to express themselves with the clothes they wear. The examples we are about to look at expose the true potency of fashion as a cultural and historical artefact.

Venezuela is a country on the brink of total collapse. The death of popular socialist president Hugo Chávez in 2013, combined with the global fall in oil prices – the country is one of the world’s biggest exporters – was when the situation became truly critical. Government minister Nicolás Maduro, elected President in the wake of Chávez’s death, has ruled the country by decree ever since. Maduro’s continuation of Chávez’s failing policies has led to increased murder and crime rates, widespread poverty, a shortage of goods and a national energy crisis. Trapped in an unbreakable cycle of poverty, Venezuelans have turned to an unlikely source for solace and deliverance - beauty pageants. Under the guidance of controversial pageant director Osmel Sousa, Venezuela has won more international beauty titles than any other in the world. Viceland’s Hailey Benton Gates recently travelled to Venezuela to explore this phenomenon. 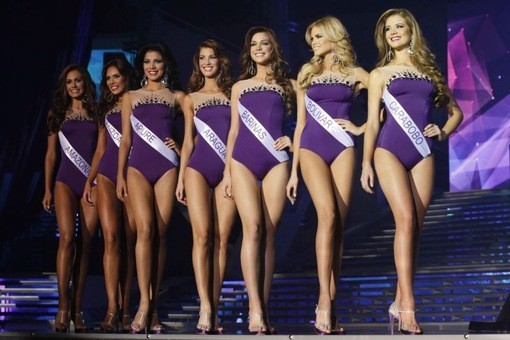 Despite the chronic financial crisis gripping the country, and the difficulty and extortionate cost of getting hold of even basic necessities, the average Venezuelan woman spends approximately one fifth of her annual salary on beauty and cosmetic products. In the capital, Caracas, there are modelling institutions where you can enrol girls as young as four to be trained in modelling, singing and dancing in order to prepare them for a life of pageants, and hopefully mould them into the future ‘Miss Venezuela.’ As one the senior student tells Benton ‘all Venezuelan girls dream of becoming “Miss.”

Being crowned Miss Venezuela gives one lucky girl every year an opportunity to ascend to the upper echelon of Venezuelan society. It is their golden ticket to fame and fortune, allowing them to carve out lucrative careers in modelling, TV and acting; essentially these girls dream of a life of financial security. The most determined will stop at nothing to become ‘Miss,’ and this includes cosmetic surgery. In fact, surgery is actively encourage by pageant puppeteer Sousa, and many believe this is the key to his success. One aspiring pageant queen summed it up when she told Benton that she believes Venezuelan women think it is their ‘responsibly to be beautiful.’ 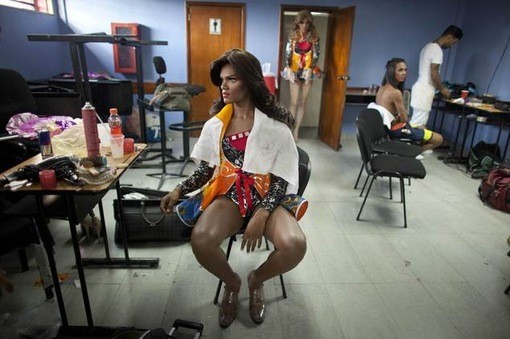 However, this pressure is not just limited to women, men are also held to impossibly high standards of beauty. Venezuela is also the only country to have ever won the grand slam of men’s beauty pageants – Mr World, Man Hunt International and Mr International. For men, the pageant scene represents the same opportunity to escape as it does for women. In Gates’ documentary we see a young man trying to mould himself into a future pageant king by undergoing a rhinoplasty in the hope of creating, what his doctor calls ‘a more Caucasian nose.’

The doctor in question not only allows Gates and her crew to be present and film in the operating room, at one point during the procedure he even goes as far as to offer Gates the knife and tells her to have a go making an incision– she politely declines. When the operation is over the doctor says of his bloody patient – ‘he’s a white man now.’ As a direct result of this national obsession with beauty, Venezuelan men and women off all ages, not just young pageant hopefuls, feel the pressure to maintain idealised and often unrealistic standards of beauty. Almost one in every five people has undergone cosmetic surgery. No matter your age or sex it is impossible to escape this pressure to be ‘beautiful.’ Who has the power to define beauty? There is nothing wrong with a man or woman wanting to look more beautiful, and if they want to do that via surgery there is nothing immoral in that, the problem arises when people stop defining beauty on their own terms and instead try and adhere to a prescribed notion of beauty that is being enforced upon them. 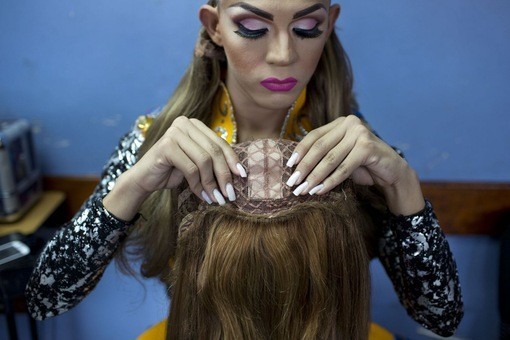 On the opposite end of the spectrum from this Venezuelan need to be outwardly alluring and captivating, are Muslim countries such as Iran, which have recently hit headlines due to the tensions arising from women wanting to express themselves via fashion within the limiting constraints and laws imposed upon them by strict governments. Before the 1979 Revolution in Iran, its citizens weren’t subject to the same level of censure they are today - it was not a bed of roses under the rule of the autocratic Shahs, but women especially enjoyed considerably more freedom during this time. Before 1979 Iran was a westernised country, conscious of and concerned with the latest western fashions and trends, and despite the fact that the country has been ruled with an iron fist by a devoutly religious Ayatollah, or ‘Supreme Leader’, with direct control over the government, legislature and media ever since then, this regard for style still remains today. Iran has a relatively thriving fashion scene despite the country’s limiting dress codes. When the chador was first made mandatory in 1984 (Iranian women became legally required to cover their hair, neck and arms in public) most women, fearful of the new regime, opted for heavy, demure, black scarves. However, nowadays women wear many different styles, fabrics and colours – this is just one small example of how they refuse to be oppressed by fashions that are forced upon them.

NJAL designer Nea Sandi had an interesting take on the situation, and her responsibly in the role of designer. Nea believes it is her duty to empower women to look and feel beautiful and unique despite the state’s sartorial stipulations which aim for uniformity. In her words, these circumstances merely ‘challenge both the designer and the customer to create something beautiful and stylish despite these limitations.’ Sandi does this by creating stunning printed garments – from those that would typically remain hidden from public view, especially dresses, to equally beautiful chadors, veils and scarfs so that women can simultaneously comply with the rules and defy them.

A brave few take it even further than bending the rules. Last year Iranian actress Sadaf Taherian – in protest to the restrictive laws placed on women’s appearance - posted unveiled photos of herself on Instagram. She was courageous enough to speak out about the sexual harassment she was regularly subjected to onset. The authority’s reaction only reinforced Taherian’s reason for protest – they banned her from acting, and in a totally farcical move even rereleased the offending photos, but only after photoshopping a scarf onto her. The reaction from the general public was mixed; Taherian received both venomous criticism and effusive praise online. She has since relocated to Dubai, stating that she was sick of being ‘forced to look a certain way because of the laws of our country.’ 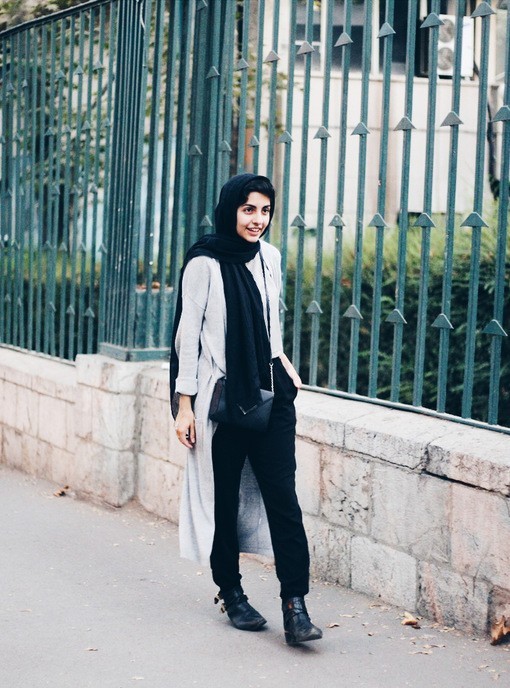 Taherian’s defiance is symptomatic of a larger cultural movement within Iran. Just like everywhere else in the world, an obsession with social media and the ‘selfie’ is thriving in Iran. The Center for Investigation of Organised Crime, an elite branch of the Iranian Police regularly monitors social media to hunt for evidence of immorality or subversion. Although the country has banned Facebook, Youtube and Twitter many Iranians find ways of getting around these restrictions and enjoy frequent access to the sites. After travelling to the country to document Iranian women’s obsession with fashion, French photographer Eric Lafforgue commented that, ‘Iranian women are crazy about selfies and Instagram.’ This obsession frequently leads to tension and clashes between individuals and the tyrannical and clerical state.

Just last year Iran launched an internet and social media crackdown– claiming that they spread anti-Islamic sentiment. Iran's Supreme Leader Ayatollah Ali Khamenei described the situation as a ‘battlefield’ – ironically he chose the medium of the internet, using his official website, to make this proclamation. This move culminated in an assault on the Iranian modelling industry – eight model agents and bookers were arrested for sharing unveiled photos of girls on social media. The State even aired live ‘confessions’ where disgraced models were made to publicly repent for posting immodest photos of themselves online and allowing themselves to be payed by beauty and clothing companies to feature certain products in their social media posts.

Although Iran and Venezuela may seem like extreme examples to invoke, but you could analyse the political and cultural climate of any country in the world by taking a close look at how the people of that country define style and beauty. In Iran and Venezuela, notions of beauty and fashion trends are used a means of fantasy and protest, and provide us with an unequivocal insight into their respective societies. In Venezuela, an impossible standard of beauty has become the one constant that the people can hold on to as the maelstrom of crime, injustice and poverty steadily becomes more tumultuous and the country’s future more uncertain. These fantasies of crowns and fame will only come true for a small few but they provide the vast majority with hope, turning their backs on the dire reality of the country. In Iran fashion and social media is a vehicle through which people can challenge their totalitarian government.

From the small acts of everyday defiance, like wearing a flamboyant chador, that prove that the government can’t stamp out the true diversity and personality of its people, or unabashed posts by brave women who refuse to conform to their country’s ideas of how they should look, act and behave. Clothes, make up and social media can provide a powerful voice for those who have been denied the right to speak for themselves…