The list of wildly talented and successful designers from the Middle Eastern North African region (MENA) is truly well stocked. Consider Elie Saab, Zaha Hadid, Zuhair Murad, Rifat Ozbek and countless more. Yet many had to leave their birthplaces in order to study or conduct business for varying reasons. A lack of educational facilities heads up the list. Others had to flee from conflict. Then there were the lucky few who were cash-flow positive and who couldn’t resist the allure of elite, expensive schools like the Royal College of Art or Central Saint Martins - considered the Oxbridges of design. Sadly, the design talent was not just haemorrhaging from the MENA but also from the Gulf States and Asia.

This migration is slowing down, thanks in part to changes that have taken place in the past few years. Beirut leads these developments with a new fashion degree spearheaded by Elie Saab and created through a collaboration between the Lebanese American University (LAU) and London College of Fashion (LCF). Now the spotlight is being shone on the Dubai Design District – simply known as d3. The multi-purpose design destination is committed to the entire value chain of design and no discipline is left out. From fashion to architecture, photography to graphic design, d3’s existence makes for a compelling case on why regional talent should re-think staying on home turf.

With a focus on mentoring and nurturing, d3 can help staunch the bleed of a nascent and fragmented regional talent, uniting them and essentially giving them a toolkit in which to create and conduct their businesses.  In doing so, Dubai will show the world how education and peace can be an agent of transformation and change. 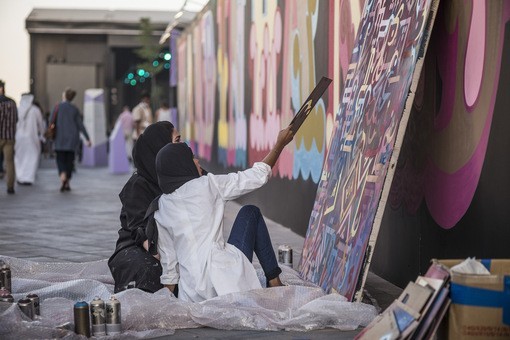 This kind of initiative is a must, says Deena Al-Juhani Abdulaziz, owner of the D’NA boutiques in Riyadh and Doha and the soon-to-be opened DNACHIC.com. Abdulaziz is an industry power player who has made ground-breaking advancements in Gulf fashion over the years but she has also been a keen observer. “For the past ten years at least, there have been various forms of workshops, lectures, conferences and trade fairs surrounding the luxury and fashion business and all of these can be considered educational platforms. I think of Fashion Forward in Dubai and Saudi Design Week in Riyadh or even the recent Vogue Fashion Experience in Jeddah, which in addition to providing platforms for designers to show their work, also included educational programming in the form of moderated talks or lectures. A decade ago creating a forum for healthy debates and discussions regardless of the discipline would have been unthinkable. So we’ve come a long way in a short period of time.”

But Abdulaziz is convinced that education is just one piece of the puzzle: “The big question isn’t whether or not these educational opportunities are impactful but what does a young designer do with that information once they graduate from a course or leave a conference? A designer and his or her studio is just a small part of a larger ecosystem that needs to be in place in order for them to survive.” 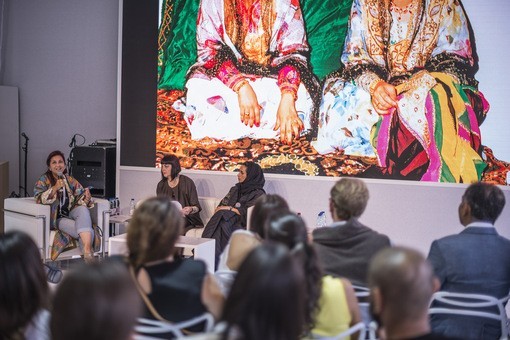 “That means also creating a manufacturing base enabling them to buy fabrics in large quantities at reasonable prices and have factories, patternmakers and seamstresses etc. to produce their collections. They also need the support of the local press to get the word out, retailers to provide venues to purchase items and also the support of local clients to wear these clothes. We can’t expect the world to pay attention to our designers if we don’t support them.”

This is where d3 comes in and can begin to tick all those boxes. The design micro-city that was officially launched last April, will ultimately span a total area of 21 million square feet. It has been created from scratch to mine out the region’s design talent – like diamonds from the rough – then give them an opportunity to shine. Its completion will come in stages and by the final stage in 2021, it will be home to offices, shops, hotels, residential spaces, galleries and ateliers. It will also be the HQ of Dubai Fashion 2020, a long-term strategy that aims to make the Emirate a global fashion capital. Critical to the whole value chain, it will have educational spaces and the all-important mentoring.

Moreover, d3 is in a stable place for study. Sadly, despite great strides made by both the manufacturing and educational sectors in countries like Turkey or Lebanon, these successes are marred by the fact these countries are still considered conflict hot spots. For example, at the Brandeis University in Beirut, American students are given a special type of emergency evacuation insurance. Dubai on the other hand has never been slighted by terrorism. 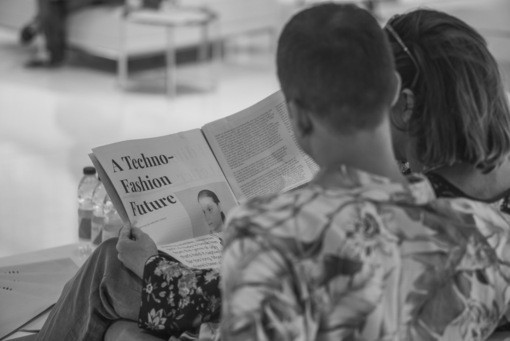 There are currently no BA or MA courses offered in d3 but that is a vacuum that will be filled by 2020. Dr. Amina Al Rustamani is the Chair of Tecom, the master builders behind d3, and is also the head of the Dubai Design and Fashion Council (DDFC).  She and her team are working closely with the Knowledge and Human Development Authority, UAE universities and countless consultants and industry players to develop design education programs and workshops.

As many hopeful designers are more than aware, design degrees can be prohibitively costly, leaving many talented individuals to flounder rather than flower. The enormous cost lies not just with established schools but newer ones too: the collaborative degree program between LAU and LCF costs an eye-watering $20,000 per semester. For the moment, discussions are taking place in regards to establishing a facility at d3.

Still the point remains, change in Dubai is already being clocked at a rapid pace.  A scant 50 years back, Dubai had more flamingos than photographers or fashion designers. What seemed imponderable just a few decades back is now on the fast track to becoming reality. As the hoary expression goes, watch this space. 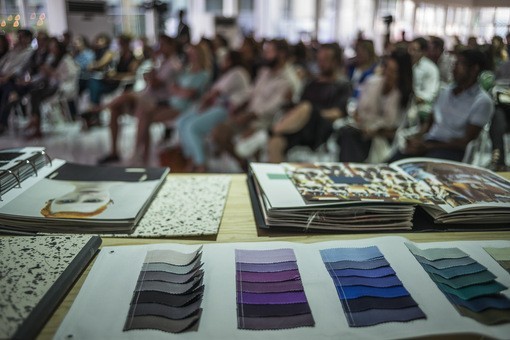 Dr. Al Rustamani adds that the goal is not to mimic other big design centres in cities like New York or London – the vast differences in culture would make that improbable anyway. Her goal instead is to bring to the world stage the unique vibe of regional designers. She explains:  “We are very strong in attracting brands here in Dubai but I believe we are also ready and have the right opportunity to develop global brands from here. I believe we have our own authenticity, unique design and talent that we could nurture and showcase.”

There are so many individuals and organisations involved and invested in d3 that it seems too well-planned to fail. d3’s Chief Operating Officer, Mohammad Saeed Al-Shehhi, for example, has recently announced a partnership with the University of the Arts London (UAL), London College of Fashion (LCF) and Chelsea College of Arts (CCA). These organisations will deliver a series of short course programmes for regional design talent, an interim measure until the Dubai Design Institute opens its doors.

Then there is Fashion Forward Dubai (FFWD), which is headquartered in d3. It gives over 300 apparel and accessory designers access to regional and international buyers as well as providing them with valuable media exposure. FFWD’s co-founder Ramzi Nakad doesn’t mince words when it comes to the organisation’s mandate: “FFWD is a platform that exists for the purpose of nurturing Middle Eastern fashion talent. Since our inception in 2012, our highest priority has been our role as a developmental platform for home-grown and regional design talent, specifically given the lack of fashion education institutions in the UAE.” 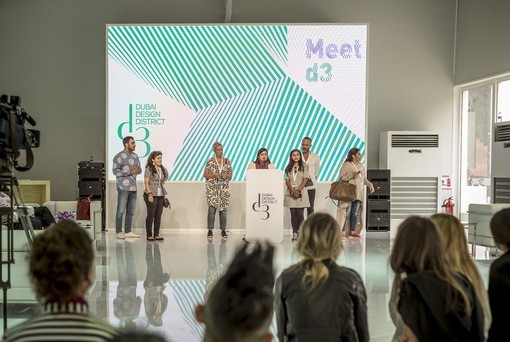 He also explains what drives them forward: “Our success is measured by the development, growth and success of our designers - that of which is very much dependent on their breadth of knowledge and access to practical experience of the leaders in the industry. Through our d3 fashion talks, we bring in industry leaders from all over the world to connect with our designers through lectures, panels and workshops.”

To be sure, FFWD have brought in a range of renowned fashion industry heavyweights to d3. Thus far, events have involved the supermodel Yasmin LeBon, the powerful CEO of Moda Operandi, Deborah Nicodemus and the photographer Scott Schuman. They also brought in Huda Kattan who, with over 6.3 million Instagram followers and an average of 2 million views per month, has the strongest social media following in the Middle East and is one of the 100 most followed people on Instagram globally.

d3 also partnered with the game changing e-commerce site, Not Just A Label (NJAL) whose mandate is to discover, support and provide a platform for emerging designers. In last year’s “Meet d3” event, NJAL hosted a pavilion to give MENA designers a physical area to show their work, an event that brought in 21,000 design aficionados, tourists and locals alike. NJAL has also partnered with ESMOD Dubai, the storied fashion school with a speciality in couture techniques – a legend amongst its ilk. Paris-based ESMOD opened its Dubai branch in 2006, producing not only a number of extremely successful designers but also fashion executives who have gone on to distinguished careers. Alumnae include Khushboo Kaplesh, who interned with Iris van Herpen before starting her own label. Then there is Canella Hostal who has worked with a roster of top designers like Balenciaga and Armani – even with Madonna on her world tour – before founding her eponymous couture label. There is also graduate Balkees Wahbeh, who is now a key marketing executive of the Chalhoub Group, considered the Kering of the Middle East. 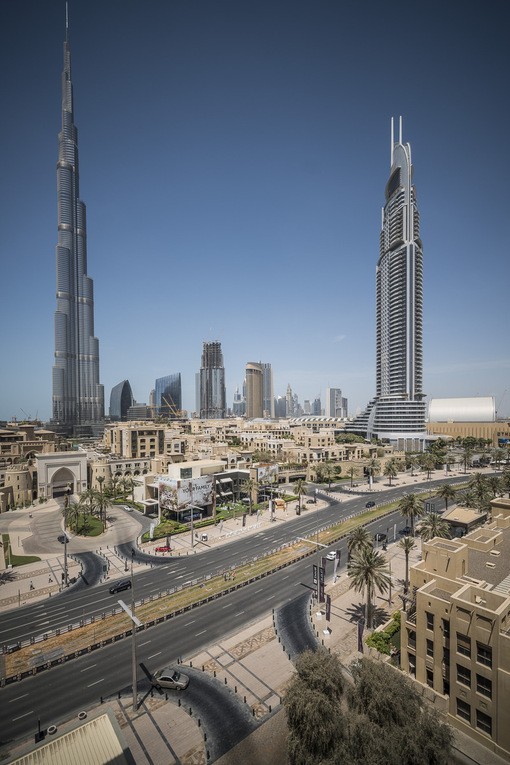 Each passing year sees the talent at ESMOD Dubai become that much stronger, so naturally the graduate shows are eagerly anticipated with this year being no exception. For the past three years, NJAL has livestreamed their graduate tour de force and that tradition will carry on again this June. The impact of this livestream cannot be understated: considering the international reach and respect that NJAL commands, it brings the multi-national talent pool from ESMOD Dubai to an entirely different audience base.

“NJAL is the authority and a pioneer in supporting emerging talents online internationally whilst ESMOD is the only international network of fashion institutes and universities”, says Denis Ravizza, who along with Tamara Hostal, co- founded ESMOD Dubai. He adds: “In this instance, it was only natural that ESMOD Dubai and NJAL, both global fashion players, join forces to showcase the UAE emerging young graduate designer collections. It is also critical to live stream the graduate show in order to reach the widest audience possible, thus raising awareness and interest in our regional talents.”

The massive numbers drawn to this livestream and other events proves the following: not only do tourists want to see a new culturally diversity in Dubai but so do locals. Many people in Dubai genuinely want to live in a less culturally anaemic city, somewhere that offers more than shopping, nightclubs and beaches. Rightly so, d3 is also distancing itself a bit from the whole 'living large' status that Dubai holds. The people behind d3 aren’t vying to make any recording-breaking tall buildings, seven-stars hotels or blinged-up nightclubs. Instead it will be a grounded hub where creators can get on with hard graft. For regional designers, finally design is no longer just a hobby or dream but a real and viable business.

As Dubai Design Week Director, Cyril Zammit, says: “In terms of design, the MENA has been a sleeping beauty for decades…and now it is about to wake up.“