For the past three years, Professor Angela McRobbie has been investigating how fashion micro-enterprises get off the ground in three cities: London, Berlin and Milan. Here she reports on what she and her team have found and what the key issues will be for young fashion designers wanting to set up with their own label now and in the future.

This study is split into two sections; part 1 and part 2. Part 1 entails Professor Angela McRobbie's research in Berlin and part 2 focuses on Milan.

Our remit for carrying out this research has been one part prompted by government thinking, which is to ascertain the potential value of Intellectual Property and copyright to the various culture industries, including fashion. The idea here is that by finding better ways at protecting and then exploiting the intellectual property of young UK trained, talented and inventive creatives more money would flow into the coffers of the culture industries as a whole. But we knew that fashion IP is a vexed issue because so much of fashion design relies on what we might call non-malevolent copying, that is ‘being inspired by’ past styles. There is also the way in which fast fashion enjoys the challenge of emulating catwalk looks without infringing the IP of the high end labels. So instead of looking primarily at IP we widened our vision, looking at IP issues, or theft of ideas and designs, as one worry among others; something embedded within the wider context of being a small scale fashion entrepreneur. Our focus then was on how designers organise their working lives and how they implement the ‘business models’ which their various mentors and advisors encourage.

Our work has also been informed by what we already knew about so many fashion design graduates harbouring the dream of setting up their own label. We wanted to know what kind of possibility this was. What kind of micro-enterprises were they able to establish? How many people did they have working for them? What does a fashion start-up actually look like? 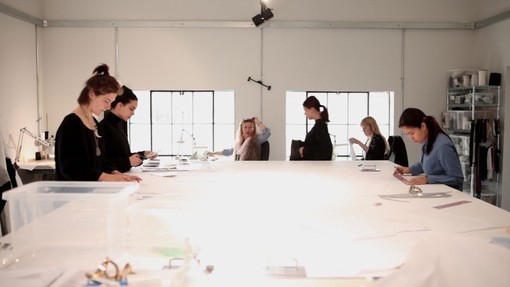 25 years ago it was not uncommon to come across all sorts of small independent labels with their own shop fronts in key London locations, in a way that is today unthinkable. Pam Hogg at one point had two shops in Soho alone, and many of the brightest young stars of Central St Martins in the mid- 1990s were able to get hold of relatively cheap atelier premises to design, do some making and sell, all in busy locations where they would also attract the attention of passers-by.

Those days are long gone. We knew that young people still gravitated in their thousands to London to train and with a view to working as a designer, but how could they do it with such exorbitant costs for living as well as working? Meanwhile it was very apparent that elsewhere in Europe, especially in the light of the Euro-crisis of 2008, for so many fashion graduates, jobs in companies were completely drying up, and so setting up as a small scale independent designer was an alternative to unemployment, as well as presumably a way of gaining self-respect. We were interested in looking at the kind of small or micro-businesses designers were developing in Berlin and in Milan. Did these new enterprises reflect also something of the desire to do fashion differently? Had the young designers been inspired by the more radical political climate which had drawn attention to environmental and ethical issues including poor labour practices especially in developing countries? Did awareness of these issues compel young designers to do fashion differently?

With a view to gaining an insight into these questions, we interviewed designers in all three cities, visited their shops and studios and invited the designers to join some of our events hosted not just in our chosen three cities but also in Glasgow; most recently at the famous Glasgow School of Art. This kind of research networking in turn helped the designers to forge new links with like-minded people, it was also beneficial because we involved, when we could, some leading policy-makers, consultants and experts. In reality the project moved beyond the scale of the typical academic research study into something like an inter-city fashion collaboration, with a lot of good will on board. The Head of Fashion and Textiles at the Glasgow School of Art provided a walkabout in studios there, which inspired quite a bit of nostalgia for the relatively carefree times of being a student. In Berlin we did two presentations at Berlin Fashion Week, one taking the form of an ‘In Conversation’ with the fashion designer and performance artist Esther Perbandt hosted at Soho House in February 2016. Also in order to get a perspective from some of the big names in the fashion world we were lucky to be able to visit the studios and talk with art directors for Jil Sander in Milan, and with the Head of Legal Counsel for Vivienne Westwood also in Milan. In London we visited the studio of Margaret Howell and spoke with the designer herself and also her business manager. 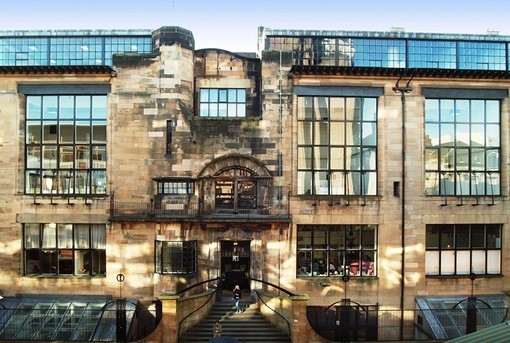 So what have we found out about micro-enterprises and how they keep going in the three cities, and what can policy-makers learn from our results? What were the surprises, what was unforeseen and what was most illuminating?

In Berlin in contrast to elsewhere, we saw, especially in the formerly run down but now lively neighbourhood of Neukölln, a dazzling array of atelier salons.  These were not exclusive designer shops but instead they were mostly small female-led fashion social enterprises. The story behind these micro-enterprises involves, inevitably, the history of the city. Berlin was a beneficiary of quite generous state funding from even before the wall came down when the Federal government had to find ways of encouraging people to live and work in the city. By that time i.e. the early 1960s it was already a post-industrial space without much in the way of traditional employment. This support took a different direction when by 2000 the nascent vocabularies of ‘creative economy’ were becoming familiar across EU member states. For some years now young creative entrepreneurs could apply for rent reduced or even rent free spaces to work in as long as they could demonstrate a commitment to undertaking some degree of socially valuable activity in the neighbourhood or more widely across the city. Additionally, we have come across sophisticated and well-designed welfare to work schemes for this sector, with the result that a talented young designer coming out of art school and without a job could conceivably find himself or herself able to join such a scheme with enhanced benefits and mentoring until such a time as the business begins to take off. This is a far cry from unemployed graduates being sent to work in Poundland as tends to be the favoured UK option. 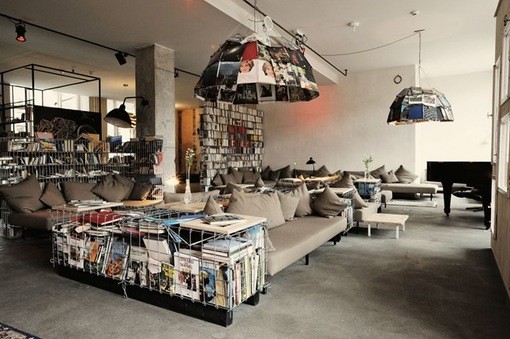 So how do the Berlin social enterprises function? We looked in some depth at four such ventures. All of them had made a lot of effort with the spaces they had found in and around Friedelstrasse, off the busy Hermannplatz. The high ceiling rooms were furnished with upcycled grand-looking antiques, gold embellished chaise longues, chandeliers, and once-elegant chairs and coffee tables for serving tea or coffee to customers, visitors and users. Behind the scenes but within sight visitors can see paper patterns, bales of yarn, textiles and sewing machines. The social element for these not-for-profits has entailed work with under-achieving girls at local schools, in the form of on-site training and work experience, it also involved providing up-skilling opportunities and bridges to work and employment for already highly skilled Turkish-German women who were otherwise at home and knitting sewing or crocheting for friends and family unpaid. One of the enterprises was a co-sewing space which likewise offered various opportunities to low income local women as well as more advanced fashion short courses to those who wanted to gain some kind of foothold in the world of fashion. And likewise NEMONA founded by one of our CREATe colleagues in Berlin gained EU social funds to provide networking services for small scale fashion producers who were working in an otherwise isolated way.

Of course alongside these initiatives there is the more familiar designer culture of catwalk shows, there is Berlin Fashion Week and all the press and media attention that goes with the cycle of high end fashion. But we found the designers in Berlin to be less divided in status than their UK counterparts, there is less hierarchy and more of an egalitarian outlook. Maybe this was also because everyone had to struggle to keep afloat in a city which is off the global city fashion circuit and doesn’t have the volume of customers of other capital cities. Even the best known designers like Michael Sontag found it hard going, despite having his own shop in a well-positioned street in Kreuzberg, with an atelier workshop behind it. Likewise, Esther Perbandt, also one of Berlin’s top designers says that ‘no one is really making money’. However, she has formed strong collaborations with a number of artists and musicians in the city and one of the most striking of these involved providing new fashion looks for the choir led by the famous composer, conductor and musician Sven Helbig. 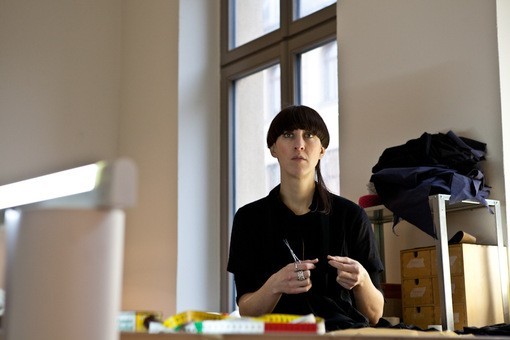 Berlin designers feel somewhat isolated from the mainstream of high end global designers, and one key reason is that the kind of sponsorships and partnerships with the High Street which could bring them to much greater prominence are so few and far between as to be almost non-existent. In effect, it is these arrangements which have so underpinned the viability of UK designers, but sadly in Berlin and Germany more widely there seems to be little incentive to major High Street outfits like Baselitz or s.Oliver or Marco Polo (all badly in need of a re- vamp) to look to what a higher designer input could do for their sales.  German fashion consultant Prof Oliver MacConnell puts this down to the old fashioned, male-dominated complacency which characterises the affluent Mittelstand of the German fashion and apparel economy. ‘They are indifferent and deep down it is as though they do not really respect the ideas of fashion as a creative milieu’.