Could St. Louis be the Fashion Capital of the Midwest?

Is sleepy St. Louis waking up to revive its historic legacy in the US fashion industry and rival both NY and LA? It's gained key support from industry impresarios like Fern Mallis, Barney’s Tomoko Ogura and Iris Apfel. The buzz follows the appointment of Eric Johnson, formerly vice president for fashion and arts at the New York Economic Development Corporation, to the new role of Executive Director role of the St. Louis Fashion Incubator. Are St. Louis’ industry power moves a credible step in reshaping the US fashion industry?

The US encompasses 50 states over a vast 9.857 million km², yet its purported fashion mainstays are universally considered New York City and Los Angeles. They’re on opposite sides of the coast with a huge lag of space in between, so why are America’s provincial powerhouses in fashion wilfully ignored by the industry at large? Mass media perpetuation tells us ‘Made in America’ is enjoying a comeback, and so are some of its historic manufacturing centres from Philadelphia to Chicago to St Louis, and today, NJAL is delving deep into the latter Midwestern city to investigate whether its bid to compete with New York and Los Angeles has any real promise in 2016.

Historically, St Louis’ once storied garment district was second only to New York in the late 19th century. From the last roar of the ’20s right past World War II, it was St. Louis (along with New York) who fashioned the nation’s women. By the 1920s, St Louis’ fashion district covered 15 blocks, and people even flew into the city twice a year to attend important fashion shows, and it was possible to stand on Washington Avenue and hear the buzz of thousands of sewing machines running up seams of women’s dresses. Between the years of 1934 and 1949, the number of women’s clothing manufacturers tripled, and the total sales volume spiked from 20 million to more than 85 million dollars. St Louis was a bonafide domestic manufacturing giant. 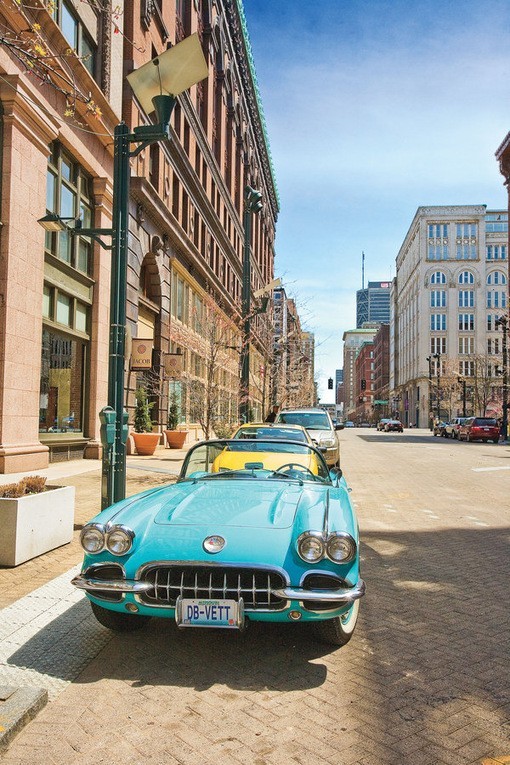 The city managed to sustain its manufacturing momentum well into the ‘40s, and St Louis was even the first to develop the notion of ‘junior’ sizes in garment production, which of course, totally changed fashion consumption in the US. “Some of our best customers actually walk out without buying when they can’t get St. Louis originals,” Jeannette Abelow, a buyer in Brooklyn, told Retailers Market News in July 1938. And in 1942, LIFE magazine wrote that St. Louis gave “young U.S. girls just the kind of dress they wanted.” Women were now spending an average of $55 on clothing every year, and St. Louis was supplying rather a lot of them.

Of course, like many Midwestern production centres, the modernisation of the ‘50s saw a bitter end to St Louis’ once unrivalled trade-needle industry. As manufacturing moved out to smaller towns, and overseas, and demand began to dwindle, many of its factories were forced to shutter and by the ‘80s, St Louis’ garment district became wholly unrecognisable as clubs, restaurants, residential lofts and galleries moved in.

In 2016, The St Louis Fashion Fund (established two years ago) is the non-profit at the helms of the city’s cultural reinvention in fashion, seeking to revive its historic legacy, and supporting key activities such as St. Louis Fashion Week which has been around for 11 years. Trying to revive fashion in St Louis. might be considered a lofty goal in 2016, especially with the city’s unemployment rate currently at 5.8 percent. However, the St Louis Fashion Fund’s broader mission at large is to catalyse the local ecosystem by firstly stimulating creativity (attracting designers), establishing a skill set for production/manufacturing and envisioning a broader view where all of the vital skill sets that make up the fashion industry will follow – from stylists, photographers, PRs and even the key business minds that drive the bigger mechanisms of fashion. It’s certainly a bold plan. 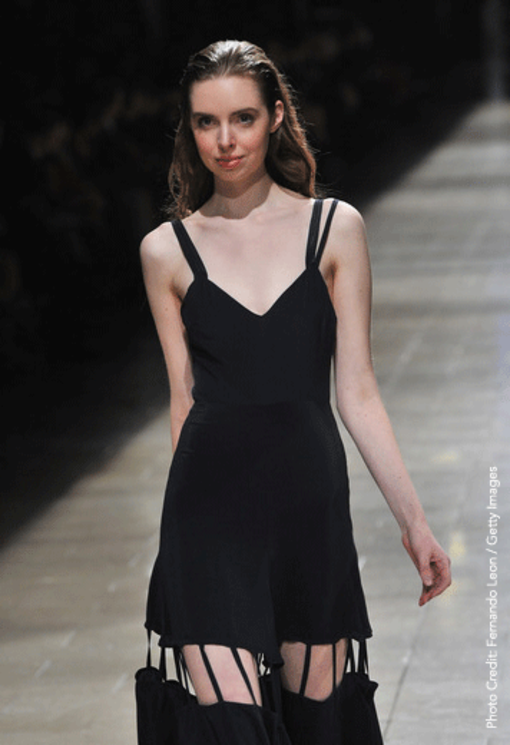 Gary Wassner, Co-CEO of Hilldun Corporation certainly sees St Louis’ mission for reinvention as both credible and entirely possible, largely because America needs strong manufacturing hubs, especially as the demand for a return for United States production increases amongst consumers. Wassner says that creating a manufacturing hub in the centre of the country makes sense, as fashion designers want to return to producing in the states.

NJAL knows that all too well, especially through supporting the Made in New York initiative when the digital platform launched its pop-up store at Waldorf Astoria New York this past holiday season. Many of NJAL’s NY-based designers produce locally because there is a demand, quality control can be closely inspected, and buyers and stores appreciate the speed of delivery. Yet, the costs of manufacturing in New York remains out of reach for many young designers, so if viable alternatives exist in America, then perhaps, even more, fashion production could return to the United States.

St Louis Fashion Fund is actioning that plan, with the launch of the St Louis Fashion Incubator set to provide programming and mentorship to six carefully selected emerging fashion designers. Building on the skill set Eric Johnson developed through the NYCEDC, as well as his numerous New York fashion and apparel connections, Johnson tells Women's Wear Daily, “The ability to not only increase the profile of the city, and to increase the elements of fashion, design and culture was really appealing. If it had been in another city, it probably would not have been as attractive to me.” 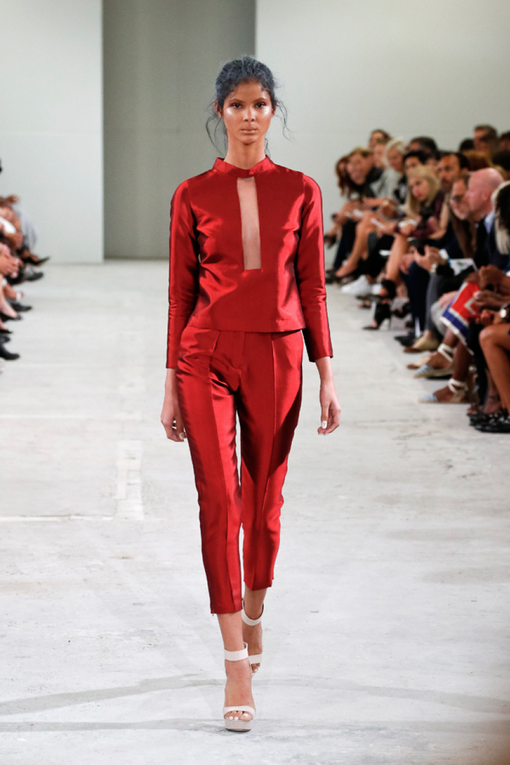 The Incubator will spur a movement to attract a design based business community to match the technology community clustered around the T-Rex building. It is the Fund’s hope that designers, sewers, patternmakers, photographers, and other fashion and design-related businesses will also move downtown and help serve successful start-ups growing out of the Incubator, creating a vibrant fashion corridor in what was once a thriving garment district. Education is certainly a key ingredient for the incubator. Eric Johnson tells us, "If you look at cities worldwide — whether it be New York with FIT, Parsons, and Pratt, or London with Central Saint Martins — there is definitely a strong correlation between centres of fashion and the educational systems acting as a feeder for them.  We're very fortunate to already have a strong relationship with several universities, including Washington University. While I wouldn't be able to speak to their specific plans moving forward, what I can say is that I would hope that our relationships with universities here become somewhat of a virtuous cycle.  That is, our work to grow fashion and design in St. Louis from a business perspective leads to a doubling down on those areas from an academic one."

While perhaps St Louis’ grand vision to reclaim its place in the industry might seem overzealous to some, the wheels are in motion and only time will tell whether it can replicate its storied success. Johnson aptly points out that there are many other smaller cities punching above their weight in the creative industries while boasting undisputed cachet and clout. In a fashion context, Antwerp, Belgium is a key example of a city with the staying power of a fashion capital like Paris or New York, yet without any real infrastructure (besides an incredible design education legacy) to support and purport it.

The success of St Louis Fashion Fund’s annual Caleres Emerging Designer Award is another milestone in its mission at large, which last year attracted finalists such as Eckhaus Latta, Brandon Sun, Novis, NJAL’s own Azede Jean-Pierre, Haus Alkrie and Houghton (who took home the $25,000 grand prize). While these are all New York-based brands, it was a smart marketing strategy for St Louis. to cash in on the cachet of some of New York’s best rising talents and attempt to position St Louis. as both a destination for fashion showcasing. Largely, time will tell the success of such efforts, but with the Incubator’s programming initiatives now set to go, the city will be nurturing and developing some of its own native Missourian fashion talents soon enough.