Clothing The Fantasy Corners of America

Made In The USA. What does that mean to you? For NJAL Contributor Louise Stern, the deeper meaning and validity of that powerful label that marks garments is one to be grappled with, particularly in our current reality. 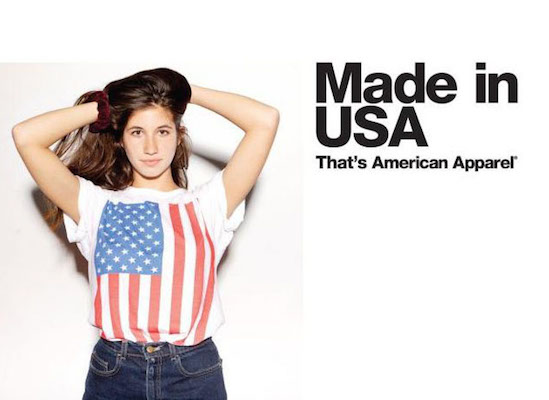 As Andy Warhol said, “Everybody has their own America, and then they have pieces of a fantasy America that they think is out there but they can’t see…So the fantasy corners of America…you’ve pieced them together from scenes in movies and music and lines from books. And you live in your dream America that you’ve custom-made from art and schmaltz and emotions just as much as you live in your real one.”

In this vastly different day, Warhol’s quote is no less, and perhaps even more, true. The fantasy America is no less potent for what is happening in the real America, and may be increasingly vital for helping to fuel essential change. There are few things that provoke the desire to transform more than clothes; bearing these things in mind, it is at first surprising that less than 2% of the clothing worn in America is Made In The USA.

But then logic comes creeping slowly in. Even with globalization and the new complexities that today’s largely shared economy brings to Made In claims, Made In Italy and Made In France still carry innate glamour and notions of centuries of luxury and tradition for many.  Made In America simply does not have the same broadly historical cachet when it comes to clothes as it does—or did—for cars.

Another issue currently facing American fashion brands is that the type of all-American iconography beloved of Warhol and of identifiably American fashion brands such as Levi's, Carhartt, Ralph Lauren, and heritage brands could now be associated with political positioning. One wonders what Warhol would have said or made of a president that acquired initial recognizability from a reality show. Trump is a president who has a distinctive relationship to the kind of branding that a Campbell’s Soup can boasts.

To further complicate things, Trump’s pleas to buy American have received mixed reviews from the liberal fashion world. What relationship, if any, do clothes bearing Made In The USA have to Trump and his policies? 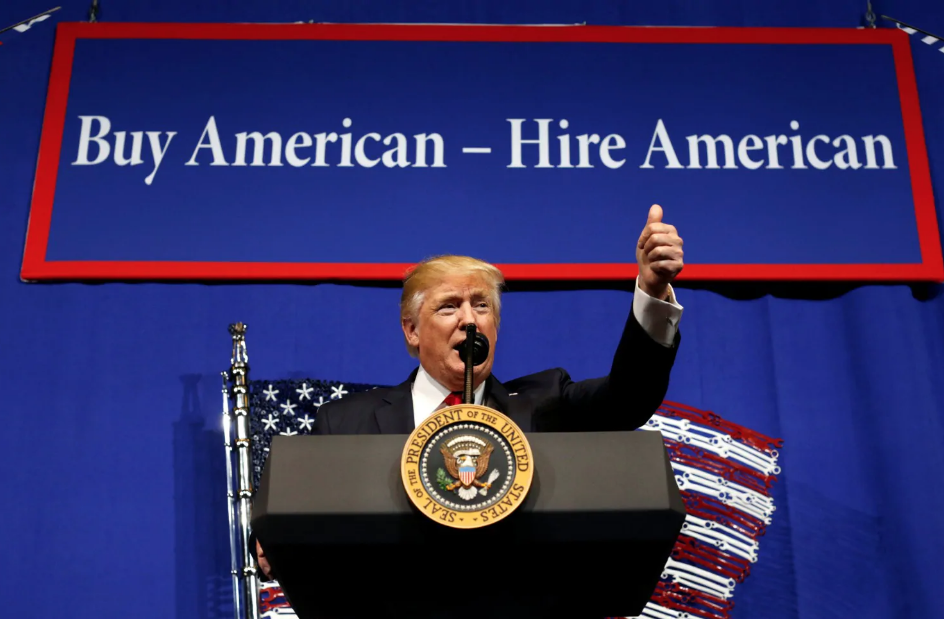 Globally Made, American Made

Until 2017, Los Angeles-made American Apparel was the biggest manufacturer of clothing in North America.  Marketing emphasized the favorable working conditions in American Apparel factories and featured images as straightforward in visual appeal and as murky in realness as a Warhol image. Feeding from a now-fading trend towards heritage fashion and hipster notions of authenticity, the popularity of American Apparel was derailed by controversy before the company was given another shot at the stars—a real live American Dream, honey!

One of the many problems facing American Apparel was the decreasing profitability of their business model. For complex reasons, the would-be return of American Apparel was based on a new consumer model that gave customers a choice between purchasing clothes Made In USA and identical but cheaper Globally Made options, both manufactured in ethically-run factories.

Erik Schnakenberg of Buck Mason, a Californian denim company set up with intentions of being entirely American Made, now says, “American exceptionalism is dead when it comes to apparel manufacturing.  If we want to make great things here, we need to partner with the best, whether they’re down the street or across the pond.” That is globalization, but how to align it realistically with that uniquely American exceptionalism in marketing American brands?

The American Apparel aesthetic is not aligned with Trump and his values, but neither does it give the customer ammunition to bolster new ideas about what being American Made may mean in our confusing era. Uncertainty about what one is truly endorsing with Made In The USA remains. 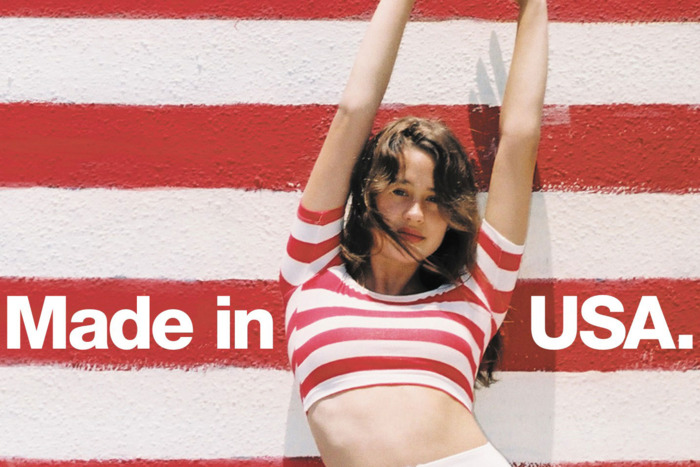 Of course, there are exceptionally numerous ways of being exceptional. Termed “the most celebrated American designers working today” by the New Yorker, Rodarte is a brand keeping the American dream alive in fashion in its very own way. It was birthed at a kitchen table in southern California, draws from the language of Hollywood film, and offers a success story that could come straight from a Fifties movie: young sisters with no formal training bring a tiny collection to New York and land on the cover of fashion bible Women’s Wear Daily a few days later, becoming the darling of all-powerful US Vogue editor Anna Wintour. Rodarte’s origins were fully honored when the brand outfitted Natalie Portman in Darren Aronofsky’s Oscar-winning film The Black Swan.

Rodarte is an unashamedly high fashion brand that draws from elements of couture and makes clothes for creative iconoclasts, but collections often draw from the same iconography as straightforwardly ‘heritage’ American brands. Redwood trees, Californian condors, Hitchcock’s The Birds, the Dust Bowl, Steinbeck, the Nevada desert.

With their Target collection and their return to New York runways earlier this year after an absence of two years, Rodarte are charting a path that is undeniably American and just as veritably singular. To this effect, the work of the Mulleavy sisters of Rodarte is the focus of a new exhibition at the National Museum of Women in the Arts in Washington, DC.

Kate Mulleavy states about the exhibition, “In fashion, we are still in this habit of only looking at the latest collection and deciding straight away whether or not you’re into it—it’s about instant gratification. That’s the nature of our world, but I think taking the time to look at this work collectively shows the larger story of who we are…” 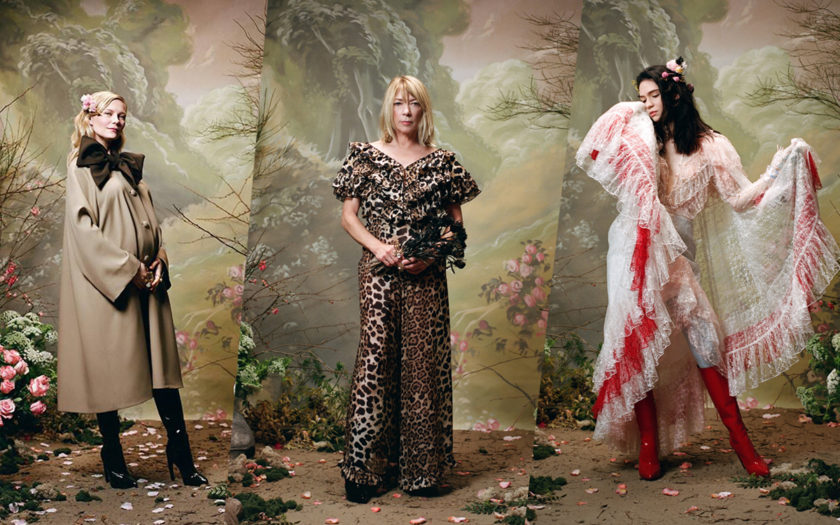 Mulleavy’s statement acquires new meaning when taken against the backdrop of American history. This is a country where, according to writer Sara Idacavage, “citizens had to decide what it meant to dress like an ‘American’ while the nation was still building itself from the ground up.”

What this boils down is that, in a way quite different to Made In Italy or Made in France, much of the exact meaning and definition of what it means to be Made In America is still being defined—and can still be shaped by liberal, feminist, intelligent, and proudly American fodder, evergreen even when surrounded by Trump’s America.

This bestows a freedom, a creativity, a bravado, an optimism, that, taken altogether, could be said to be quintessentially American—and in any day and age, that is still something to celebrate. We daresay Warhol’s quotation is being done proud—and, going further, that it is increasingly important to honor it.