Children of the Revolution: Why China’s Designers Are Ahead Of The Fashion Curve

There’s a slow but steady revolution taking place in Chinese fashion. Although still in its infancy, over the last few years the industry has shown strength of character and creative knack that speak of remarkable maturity, all the while challenging the status quo. Chinese and China-based designers are disrupting the rules of the game – and adapting to the changes of the fashion system faster than most. Marianna Cerini looks at the new fashion landscape in the country, and analyses how independent labels are adapting to the rise of digital technology, social shifts, sustainability demands and instant consumption.

Look at any designer in China and you’ll notice a spring in their step. The centre of much attention in recent years from the upper echelons of the global industry – owing to the rise of the Asian country as economic and political superpower – upstart Chinese brands have acquired a rare boldness, a self-confidence as charismatic as it is surprising. They grow fast, learn even faster, and have ambitious global visions. Simply put, they get what the game is all about.

The rapid development of Shanghai Fashion Week is proof. The event has gone from an often-chaotic ‘big four’ wannabe to an assertive player on the fashion calendar – this season, it came just after Paris. It has expanded in size, both in terms of catwalks and tradeshows, but also developed the satellite event Labelhood, a fashion incubator showcasing China’s most avant-garde and innovative names. Such a push wouldn’t have been possible without the talented crop of up-and-coming dressmakers wanting to be seen, and a realization, from the government, of the relevance ‘designed in China’ has acquired.

“Chinese designers are hungry to show their work in a way that’s catalysing,” says 10 Corso Como’s former marketing manager Zemira Xu, founder of independent showroom Tube in Shanghai. “They are looking for platforms to host them both here and abroad. They are in on social media, and have clear ideas on how to present and adjust their aesthetics to different consumers.” 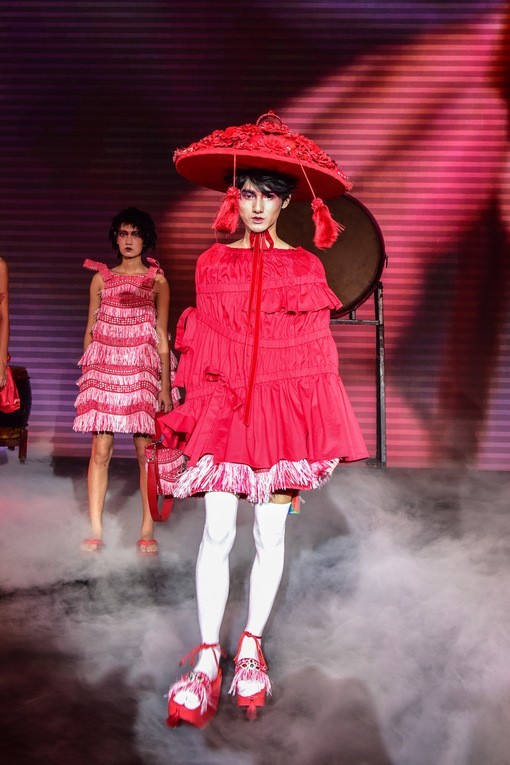 Being adaptable is no doubt one of their major traits. Born in China but often educated abroad, the new wave of local creatives has learned to balance the East-meets-West pull in subtle yet effective ways. They live in London, show in Paris, then hop on a flight to attend Shanghai Fashion Week. “It creates a ‘tension,’ so to speak, between Asian references and Western methods,” notes Xu. “And that makes the scene extremely interesting.”

For the last few seasons, a number of Chinese designers – Angel Chen, Xu Zhi, Xiao Li, Feng Chen Wang – have indeed showed in Europe before taking their collections to Shanghai. So have Shenzhen-based Ffixxed Studios, which although not strictly Chinese, is created and made in the PRC. Over the last two years, the label has been doing Paris first for a small showcase sponsored by the Hong Kong government, then China for a more personal show they self-produce. This cycle, they only showed their womenswear in the French capital, but both women and menswear in Shanghai. For the two presentations, they picked different looks, changed the styling, tweaked the set. “Learning to distinguish your audience and speak to them in different ways is essential,” says Kain Picken who founded the award-winning label with Fiona Lau in Berlin in 2008. “And people appreciate you all the more for that.” 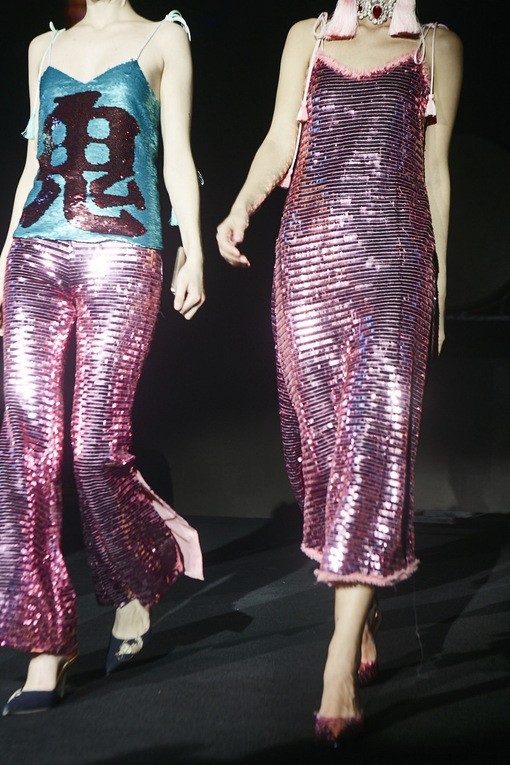 “Being in both places gives you space to try different things and experiment,” says Lau. It also shows you two sides of the same coin – Paris, which is established, almost safe, and this ever-changing hub of creativity that is China.”

London-based menswear designer Wan Hung, also a regular Shanghai Fashion Week attendee, agrees. “Chinese designers want to stamp their mark on the industry as a whole – regardless of markets or countries. Being in Europe or the States has opened us to the international market, but showing in China gives us a way to go back to our roots. It triggers a special kind of creative energy.”

These designers’ ability to express their aesthetics in different places and within short time frames has extended to their production cycle. At the very same time they were showing to hyped crowds during Shanghai Fashion Week, many of these designers’ collections were already available for purchase at showrooms and tradeshows across the city – very much keeping up with the ‘see now, buy now’ model that has been disrupting the way the fashion system operates. In this respect, too, Chinese designers are way ahead of their European peers, who have struggled with the retail-first approach. 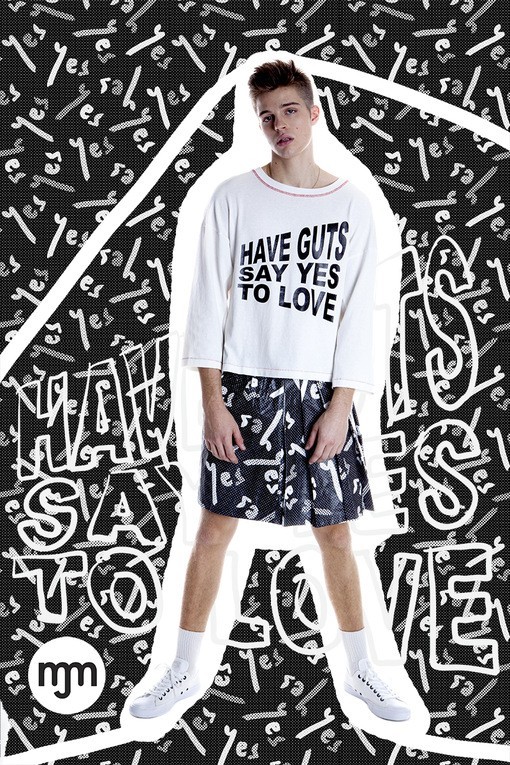 Having grown up in a country that has been rocketed through modernization over the last thirty years, a country that has had to adapt to mind-boggling changes on the fly, inventiveness is something these creatives have let seep into their DNA. But they also operate amidst cutthroat competition. A strong counterfeiting culture, where fakes of newly released products are easily available, might have also helped designers understand the importance of syncing with the needs of the market and demands of the consumer – a positive twist on instant manufacturing, if you wish.

“Many emerging Chinese and China-based designers are posing a new way of talking about and doing fashion,” says Hans Galliker, co-founder of Beijing-based brand Neemic and now of independent collective Uncover, a recently launched platform aimed at promoting independent fashion labels, designer collections and lifestyle products from and in China through pop-up events, talks and workshops. “They are focusing on innovation, craft, quality and technology with wholehearted passion.” 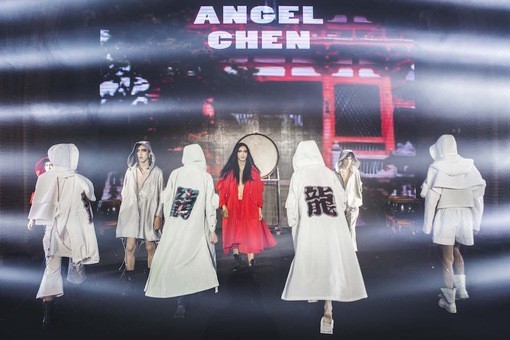 Makin Jan Ma and Angel Chen, currently two of the brightest creatives to come out of China, have done so through genderless designs and androgynous looks that question the relevance of traditional gender definitions and defy stereotypes of femininity and masculinity.

Lau and Picken of Ffixxed, London-educated Renli Su, and Xiamen-based Zhang Na of Fake Natoo, among others, have made sustainability a critical part of their work, and are helping raise awareness of eco-fashion both in China and abroad through the use of organic fabrics, upcycling techniques and purposeful changes in their supply and manufacturing chains.

Street wear label Babyghost, another brand constantly moving between West (New York City) and East (Shanghai), is linking fashion to the digital world, propelling a merger between style and technology that could become the norm in the not-so-distant future. For their spring/summer 2017 collection, co-founders Joshua Hupper and Qiaoran Huang teamed up with Shanghai-based Blockchain-as-a-Service (BaaS) company, BitSE, and its VeChain project (a cloud product management solution) to create a multidimensional sensory fashion experience that had attendees wear a scannable VeChain chip to receive ‘interactive memories’ of who had originally modelled the piece in New York City.

Bright, open and hungry, China’s rising designers are signalling tectonic changes taking place not just in fashion but the world at large. This new wave is enabling a new creative culture to take root. Their fashion peers everywhere should take heed.