Authentic Radicalism: L.A. | A Look Back

Following the announcement of NJAL’s Los Angeles residency, the city's fashion and media influencers and vanguards gathered for the second instalment of NJAL's international event series to discuss the vastly under-appreciated — and equally unfulfilled — manufacturing capabilities of the Californian city.

On an uncharacteristically overcast Tuesday morning on December 13, leaders from the Los Angeles fashion industry and media came together on the penthouse terrace of NeueHouse Hollywood to continue the Not Just a Label education series 'Authentic Radicalism.' Following the announcement of NJAL’s Los Angeles residency, this incarnation of the education series focused on the manufacturing capabilities of Los Angeles, and how small designers can achieve sustainability through focusing on smart growth and brand identity, as well as by engaging their community of fellow designers and manufacturers; and utilizing the power of technology to connect directly with their customers.

LA Is Ripe With Opportunity

The panel discussion, which was streamed live across the globe, was introduced by Krisztina 'Z' Holly of MAKE IT IN LA, Mayor Garcetti’s new region-wide initiative, and a partner of the event. Emphasizing the strength of Los Angeles as a major manufacturing hub, Holly asserted that the fashion industry should be the true calling card of LA rather than entertainment, pointing out that all of the jobs in film and television would comprise only a quarter of the jobs in manufacturing that LA boasts. 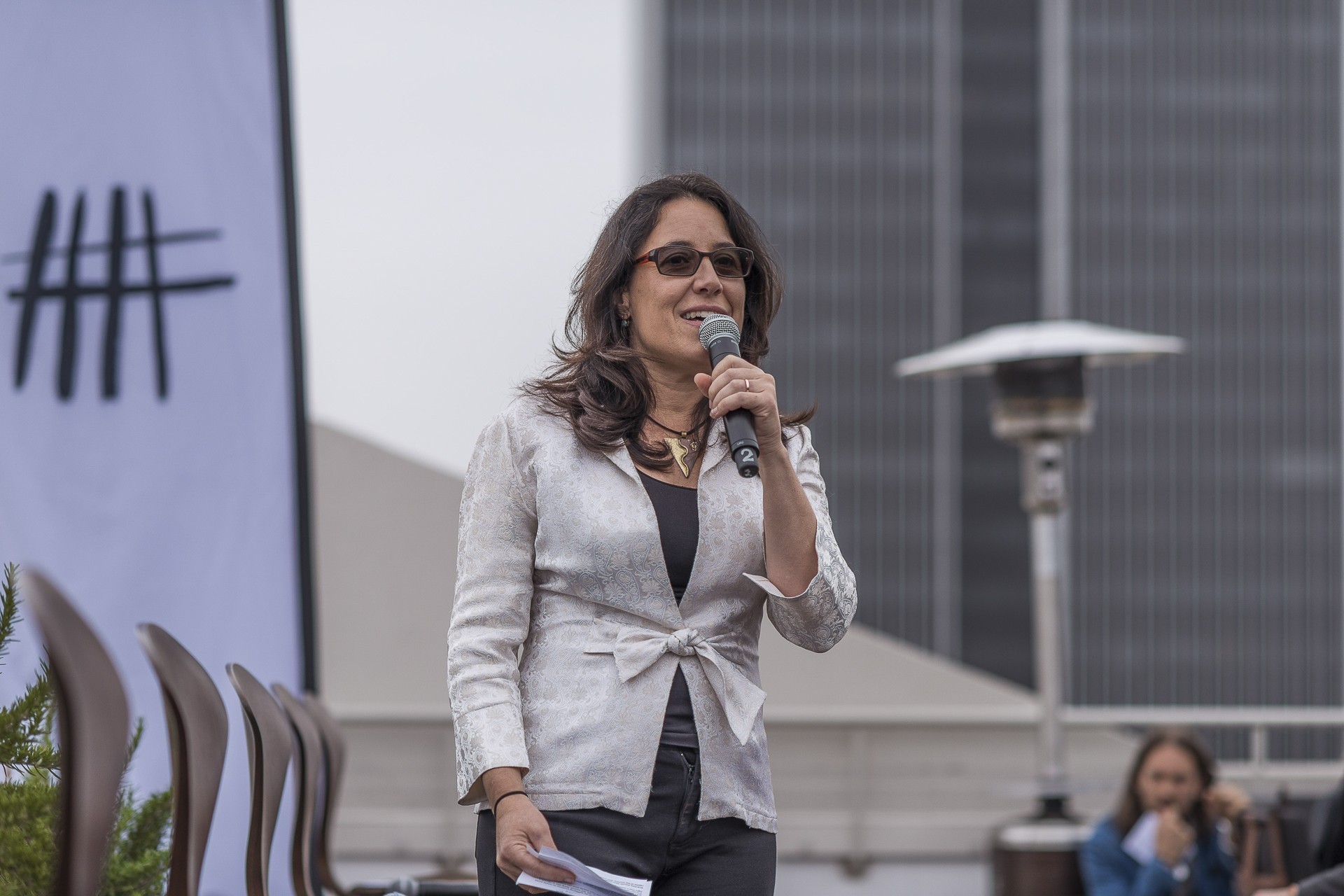 Krisztina “Z” Holly of MAKE IT IN LA

Holly spoke of how the unique strength that LA has over the fashion capitals of the world — New York, London, Paris, and Milan — is that a designer can see a product from conception to completion within days in LA, maintaining control over the entire process throughout, whereas a New York designer might be left waiting six to eight weeks for a shipping container to arrive with their product — which may or may not be what they envisioned. And still, the majority of factories in Los Angeles report that they are sitting idle part of the time. With so many designers putting sustainability at the top of their priorities and brand identities, and consumers demanding more transparency in the way their clothes are made, LA is ripe with opportunity to create a more sustainable fashion industry, and to bolster good manufacturing jobs in Southern California. 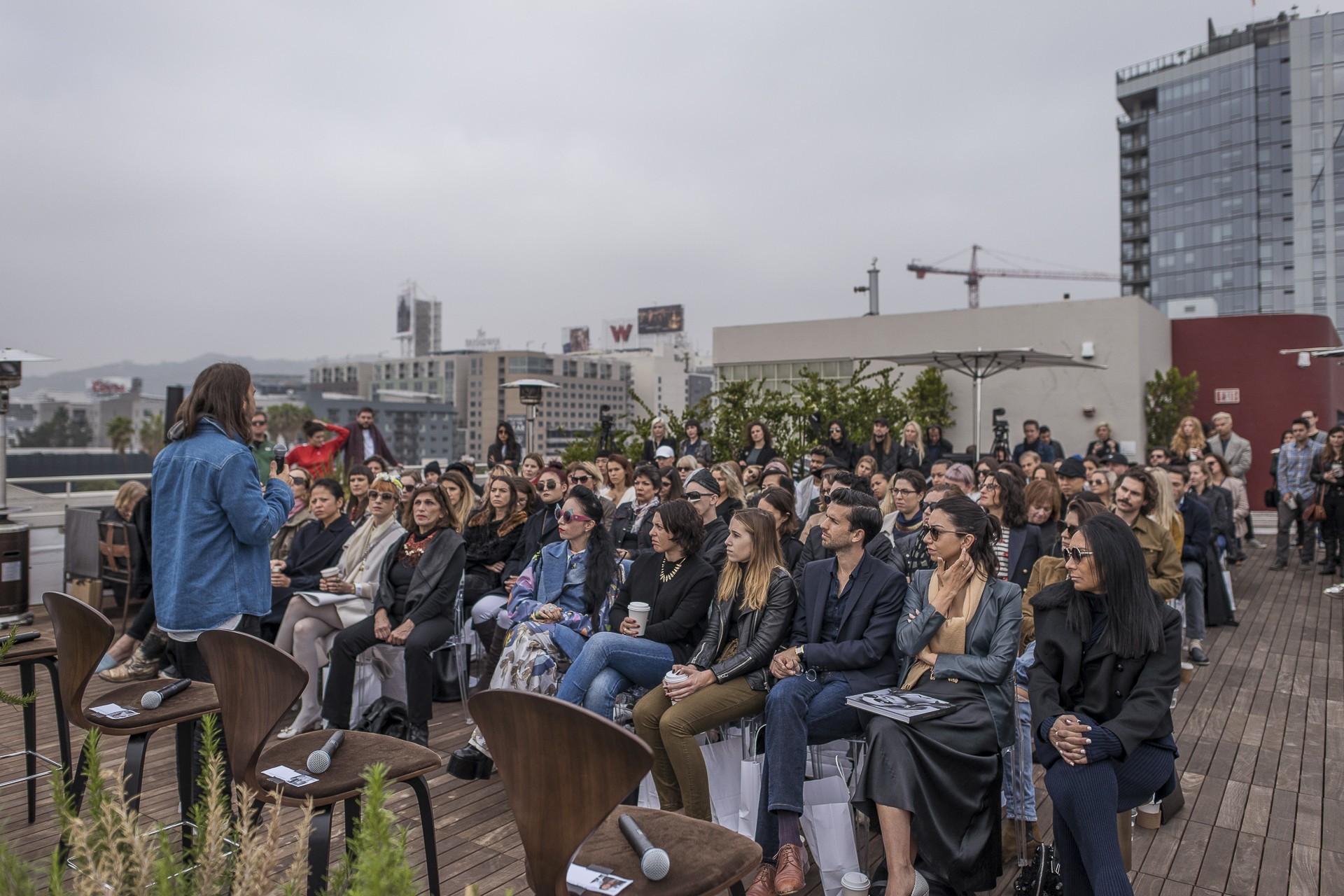 Stefan Siegel spoke next about NJAL’s founding principles of reinventing a fashion industry that had become inhospitable for all but the most wealthy. Echoing the current push of NJAL’s residency in Los Angeles, Siegel spoke on the history of NJAL’s physical activations, beginning three years ago where the company, at the behest of the Italian government, flew in 100 designers from all over the world to meet with 100 manufacturers in Northern Italy. “We try to look at the current fashion system, and flip it upside down without asking for permission,” Siegel said. 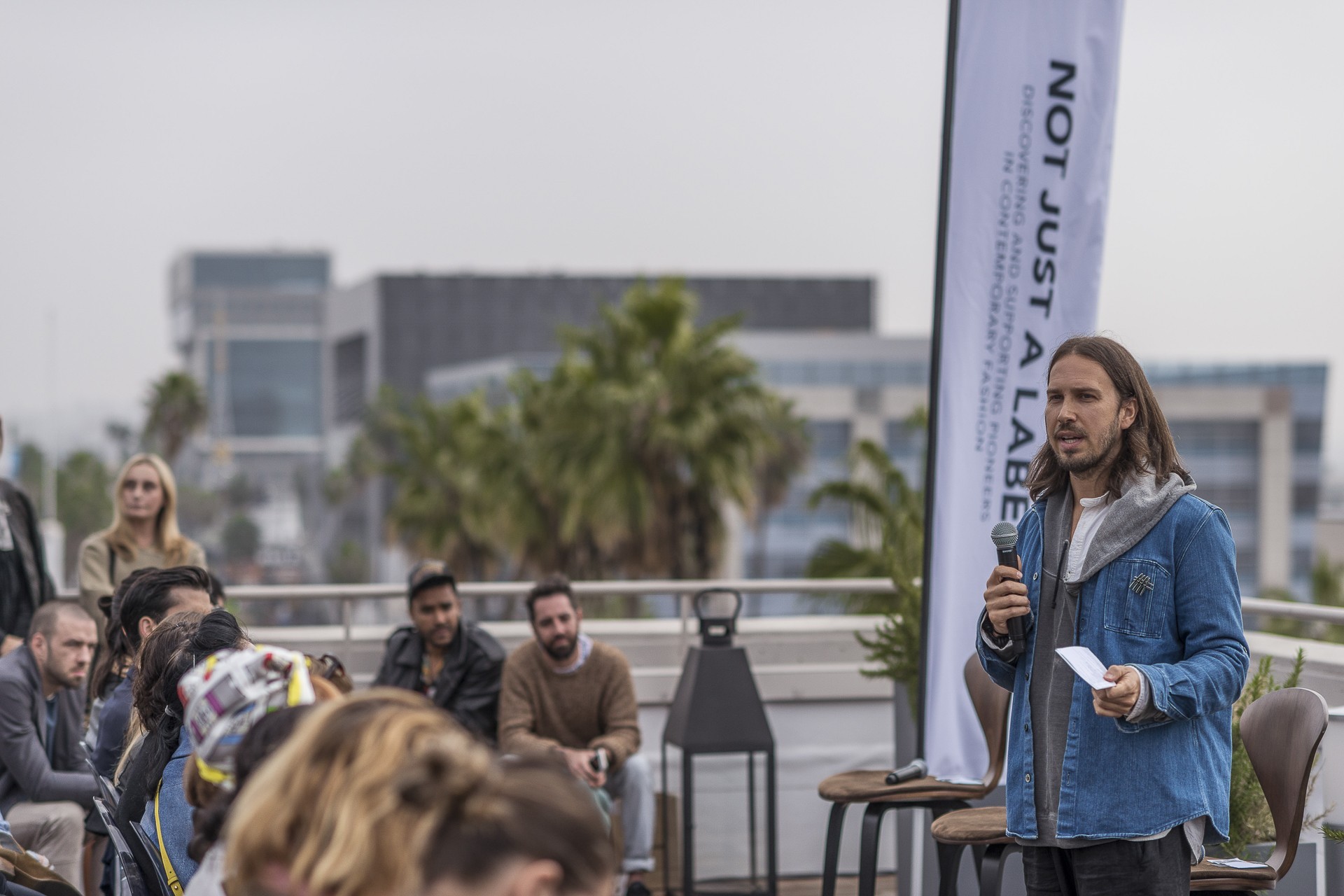 Panel moderator Booth Moore, currently Senior Fashion Editor at The Hollywood Reporter, and before that the fashion critic at the LA Times for nearly twenty years, introduced panel members including Andrea Lieberman, founder and designer of A.L.C.; Rose Apodaca, former West Coast Bureau Chief at Women’s Wear Daily who currently runs the design store A+R; Iris Alonzo, former Global Creative Director of American Apparel and current CEO of Everybody, a new sustainable clothing label; Jesse Kamm, who is the founder and designer of her eponymous clothing line, which is made in LA; and Adrienne Lindgren, Business Development Manager for the City of Los Angeles. 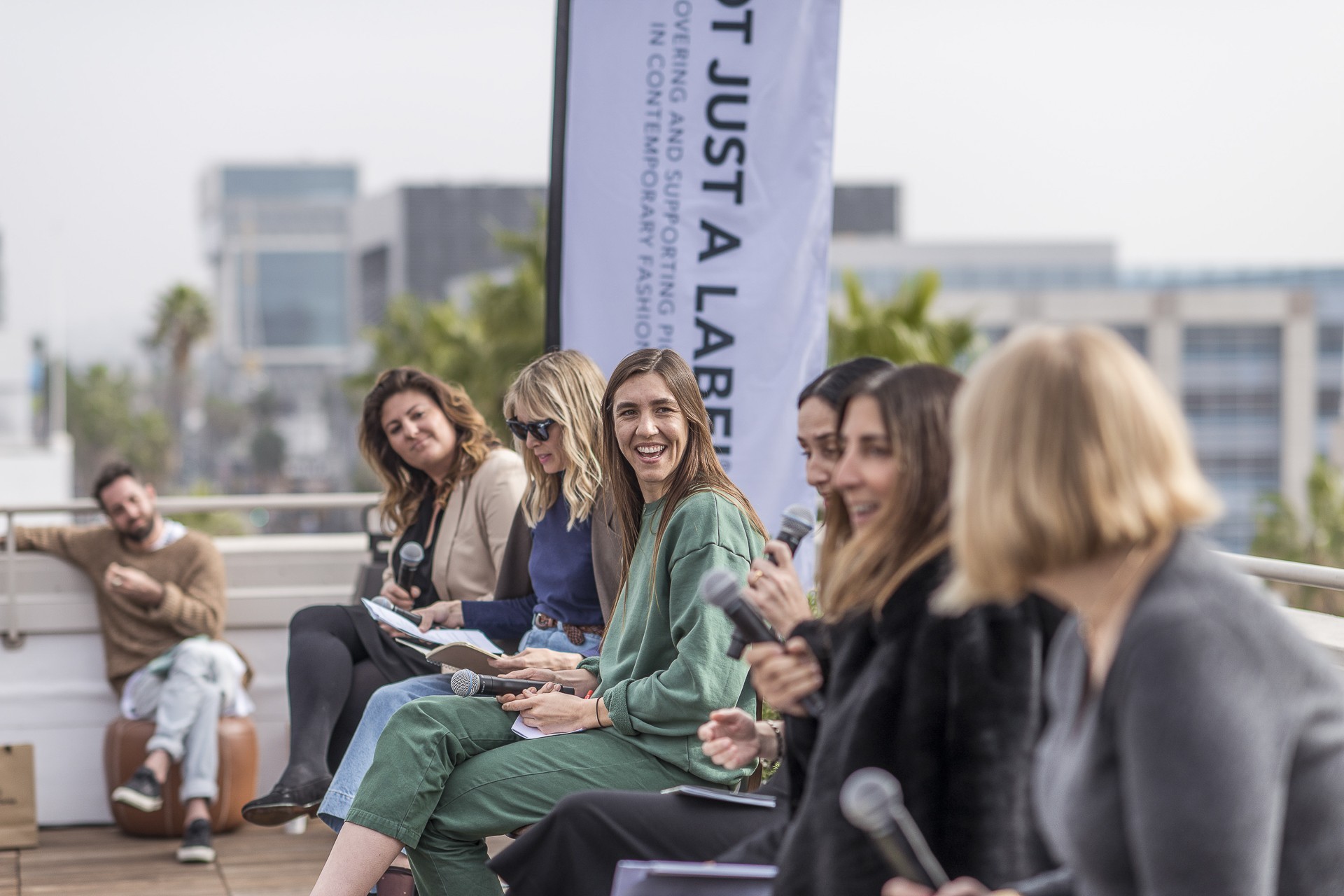 "It's Up to Designers to Get Out from Behind Their Computers"

Speaking to the challenges facing designers in Los Angeles, Iris Alonzo points out the difficulty in getting to know the manufacturers based here. “You’re not going to look on Yelp and find the best guy who makes the best button-down shirts, there’s not a very comprehensive directory" she said, “it’s really on the designers to get out from behind the computer and to walk into these buildings, roll up your sleeves, and get to know the people.” To that end, Adrienne Lindgren added that one of the goals of MAKE IT IN LA is to connect manufacturers to designers through digital platforms, “on a B2B basis,” but that they are starting from the ground up in that endeavor.

On the subject of how to get their work out to a wider audience, the designers were of the consensus that being true to their brand identity, and telling their own personal story, had created the most opportunities for them. “If you make something of value, you don’t need to put as much money into your press and show room, and it’s driven by truth, it’s driven by the value that you create as a human being" said Jesse Kamm, adding, “I feel like the time has never been easier to share what you do.” 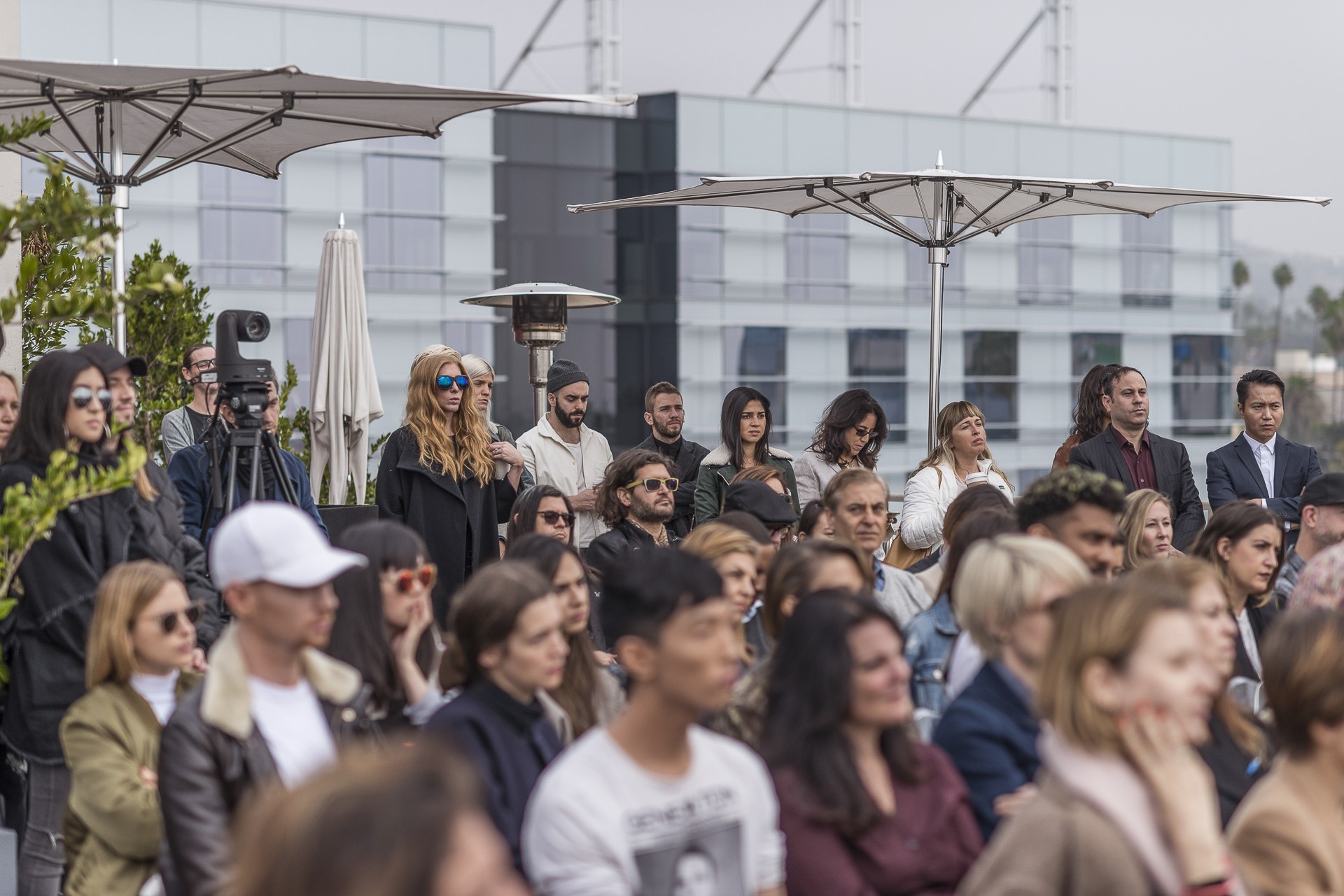 The Audience at NeueHouse Hollywood

The Future Of The Industry Under Trump

On the future of the fashion industry under a Trump administration, Adrienne Lindgren pointed to Los Angeles’ assets, including the aerospace industry, the tech industry, and manufacturing, arguing that “cities have a great opportunity to stick to their values” when it comes to fostering and protecting manufacturing jobs.

“But what about the elephant in the room?” asked Booth Moore, alluding to the cost of manufacturing in Los Angeles versus in China or Mexico. To this Andrea Lieberman pointed to the frequently erratic costs associated with producing clothing in general, noting that the taxes leveraged on a bolt of wool that is imported versus a finished wool garment are 25% versus zero. “There’s a lot more that needs to be discussed versus the actual cost of labor,” she says. 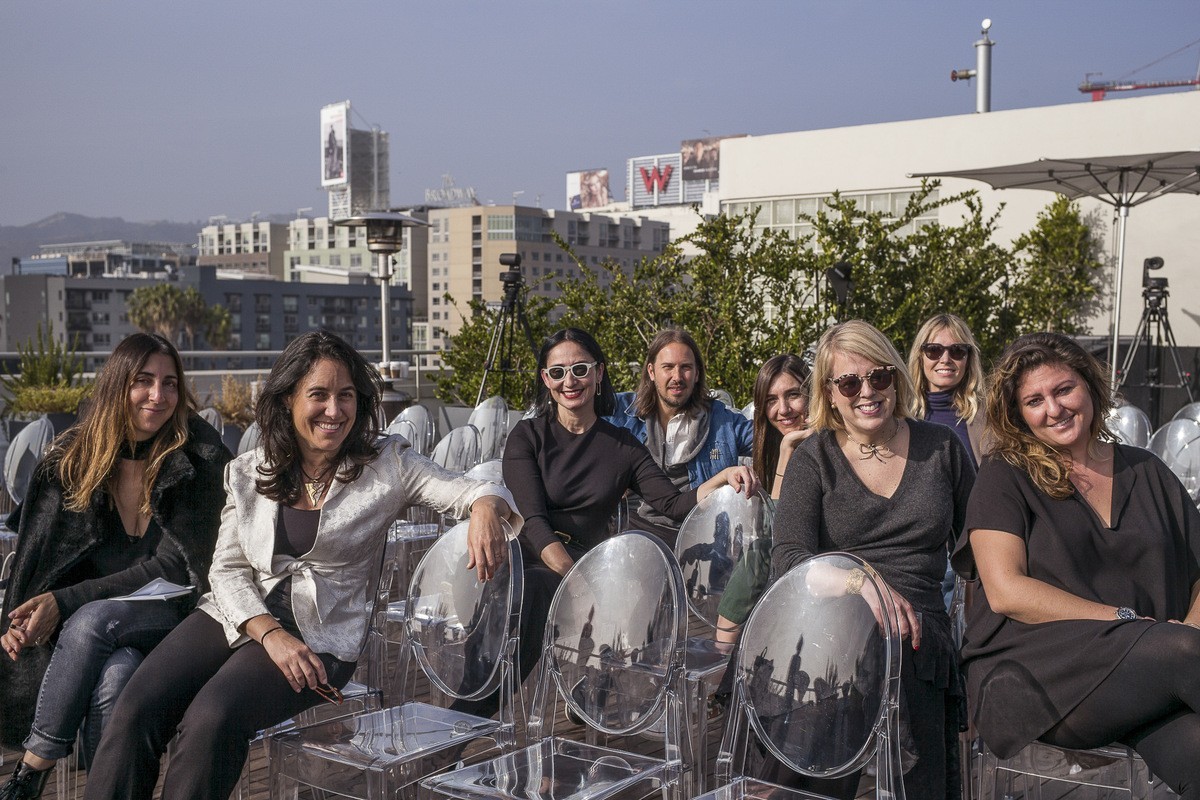 “Labor is also one of the most important costs,” added Adrienne Lindgren, “In the sense that you are also supporting someone’s growth and purpose in the economy.” She pointed to the overall cost of manufacturing a garment elsewhere, which factors in the environmental damage that that model creates. To that point, Jesse Kamm added; “I think it’s important to understand, that if something is cheap, you’re just not seeing the cost, the cost has gone into our environment, it has gone into the lack of care for the community making those garments. If you buy something from H&M and it costs a low amount of money on the tag, that higher cost is still being paid by us in the long run.”