Authentic Radicalism | Cities and a Bold Vision for Retail

How we consume, communicate, live, work and think is being transformed by technology. NJAL Founder Stefan Siegel and Los Angeles Mayor Eric Garcetti convened the brightest thinkers across retail, technology, real estate, fashion, and government to map out how we can rise to the challenges ahead.
As part of NJAL’s international event series, 'Authentic Radicalism | Cities and a Bold Vision for Retail' was hosted at Los Angeles City Hall. NJAL’s in-house futurist Sophie Hackford hosted the session bringing together experts, who will shape the experience of the future consumer.

“Creativity is the currency of the future,” Stefan Siegel, CEO and Founder of Not Just a Label said last Thursday at an event hosted by NJAL and the Los Angeles Mayor’s Office at City Hall. Speaking to an audience of the city’s most talented shopkeepers, designers, manufacturers and innovators as part of NJAL’s international event series, ‘Authentic Radicalism | Cities and a Bold Vision for Retail’, Siegel and his team convened a group of friends and industry leaders to discuss the future horizons of fashion, technology and retail. 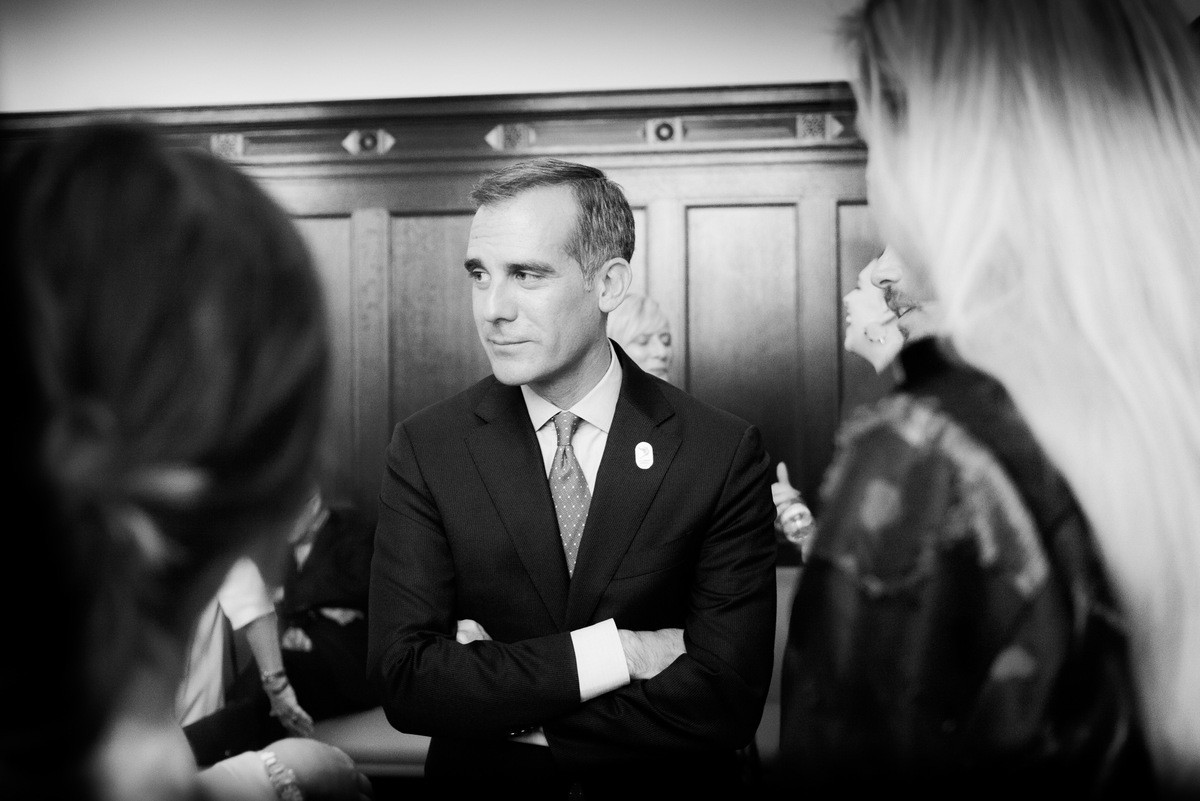 Of the 150 countries where NJAL operates – by now representing over 25,000 designers from Costa Rica to Japan, leveraging what Siegel calls “one of the most creative communities on the planet” – Los Angeles represents its fastest growing design community, paired with a cross section of over 22,000 manufacturers and booming tech, entertainment, and consumer industries. NJAL has so far organised events on the future of retail and cities with Mayors and fashion communities of London, Berlin, Dubai and New York. But is it Los Angeles that NJAL has chosen as its American hub and locus of conversation. 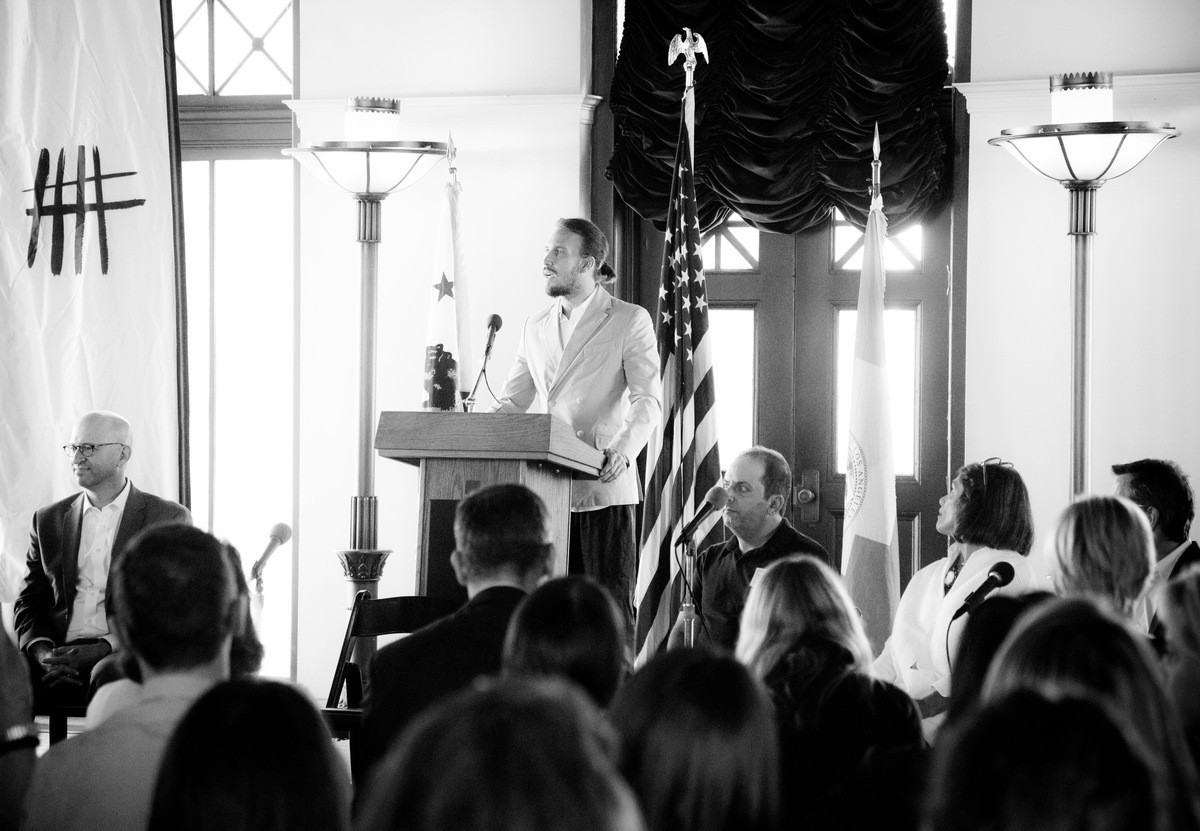 “Creativity is personal to us. We have the best storytellers in the world,” Mayor Eric Garcetti said, taking the podium at City Hall’s Tom Bradley Room. With the city sprawling beyond the colonnade windows, Garcetti, told guests how energized he was by the creative economy, responsible for approximately $9 billion of the GDP in the city and 400,000 jobs in Los Angeles alone, which boasts the third largest economy in the world. 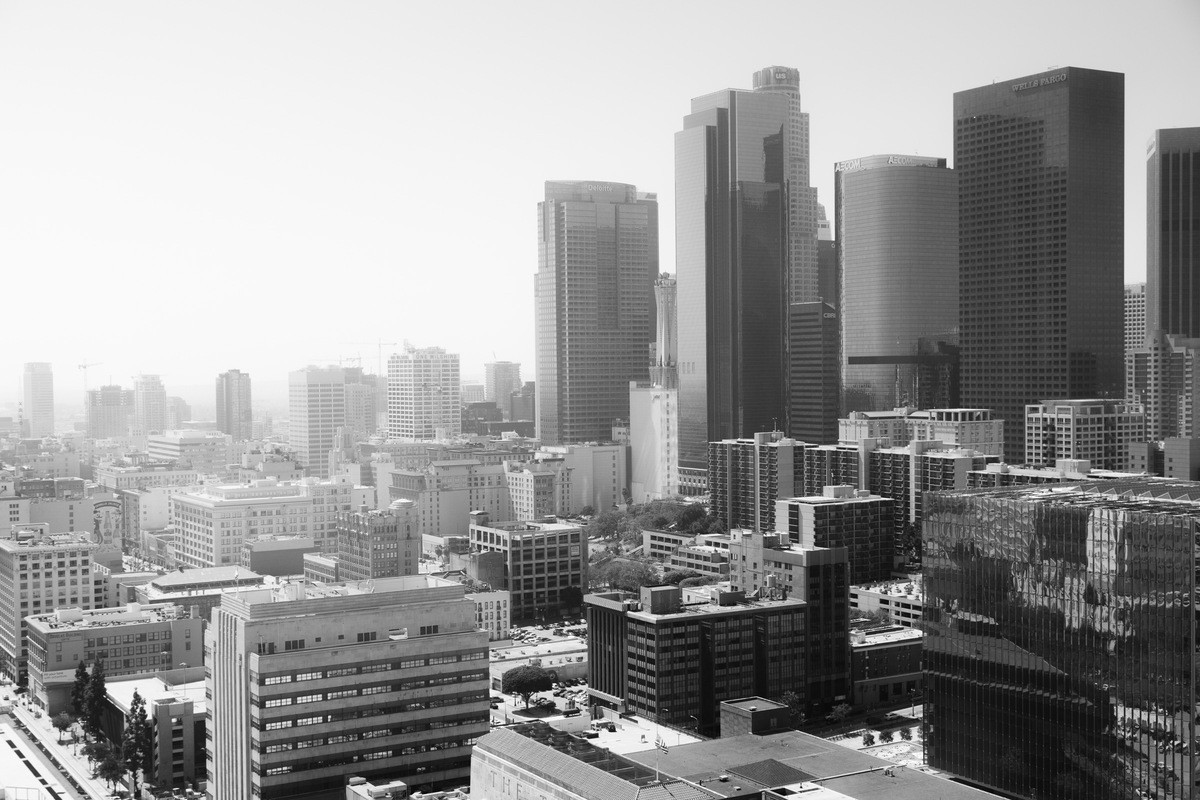 NJAL and the Mayor’s Office are natural partners, collaborating on envisioning the shape Los Angeles’ future retail strategies should take. As NJAL CIO and in-house futurist Sophie Hackford says, “the lines of entertainment and consumerism are blurring.” Brick and mortar stores will evolve to become necessary hubs for human experience. Any radical re-imagining of the future is bound to happen in Los Angeles, and it needs to, urged Garcetti, “So that the darers and the doers will continue to stay here… and touch the lives of the city and the world.” 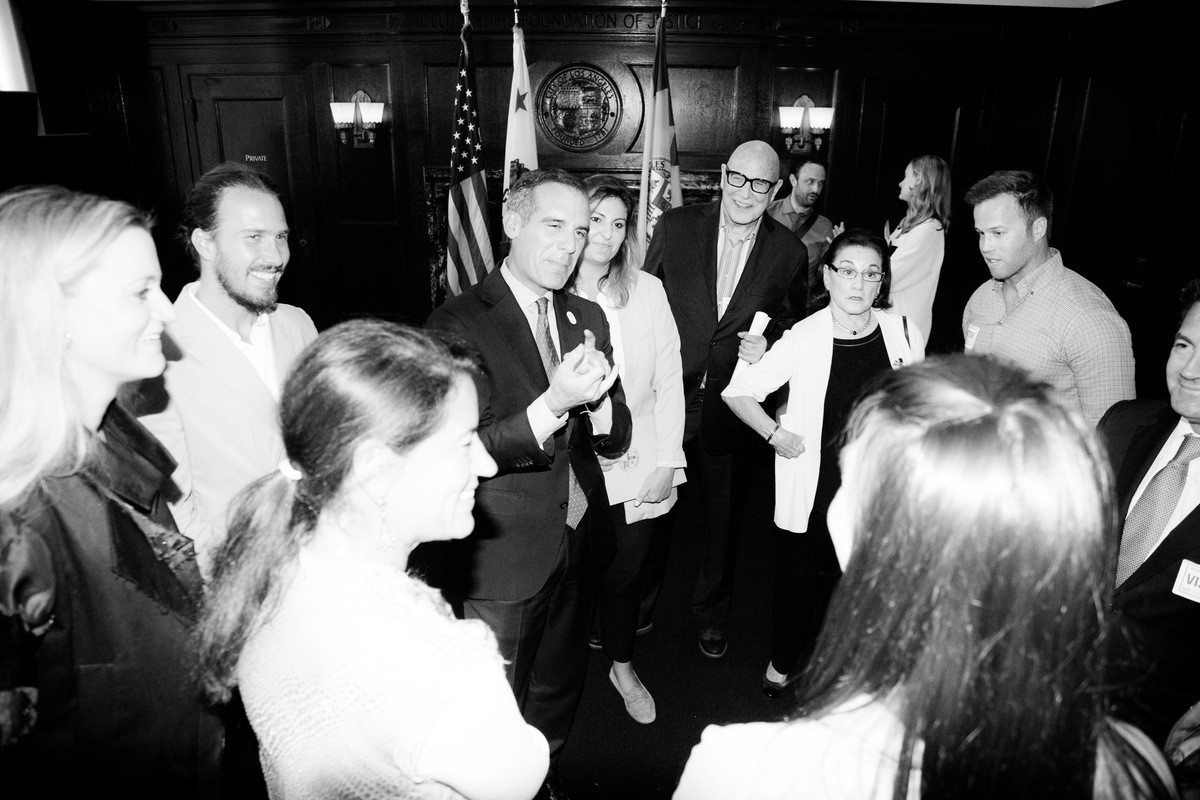 NJAL’s conversation on stage included Dreamworks Animation President, Chris deFaria, who spoke about merging the excitement of cinematic experiences with real life, bringing the world of films beyond theaters into malls and stores through location-based interactive experiences. "Virtual reality holds great promise," said deFaria, who in addition to being the head of DreamWorks animation, is also building virtual worlds with Steven Spielberg serving as a producer for his new Warner Bros. film Ready Player One, where people escape to a simulated world called OASIS, and leave their real worlds behind. deFaria is currently evaluating how to bring the innovations imaged for OASIS, back into real life initiatives for DreamWorks. 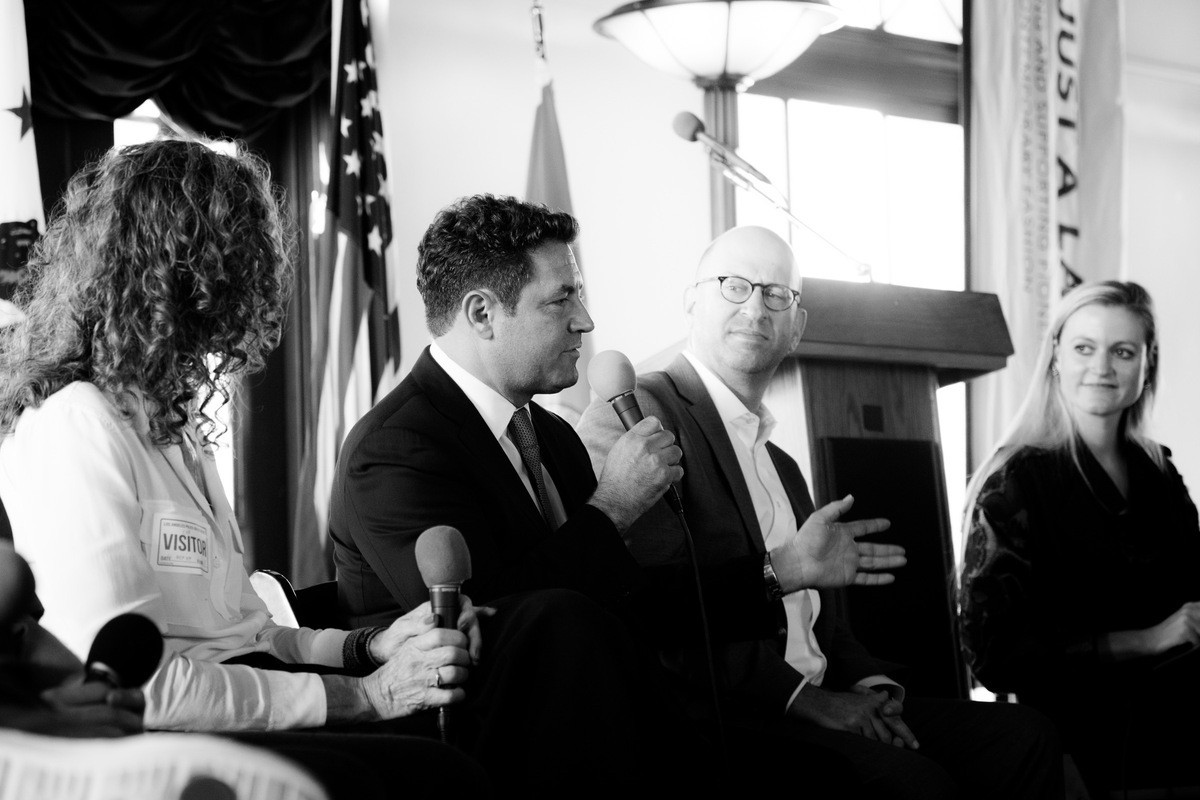 Doris Raymond, the storied collector behind The Way We Wore, the vintage clothing stalwart on La Brea, reported feeling hit by “the internet bump,” as she called it. Her shop, which is sought after by international clientele (along with Hollywood stylists and costume designers), is now up against countless online stores. But in terms of experiencing retail, Raymond’s shop is a destination in itself. An archive of American fashion through the decades, The Way We Wore provides unique physical contact including the “visceral experience of touching 1920s gold lamé,” as well as Raymond’s encyclopedic knowledge of fashion history. The problem is only getting people there. 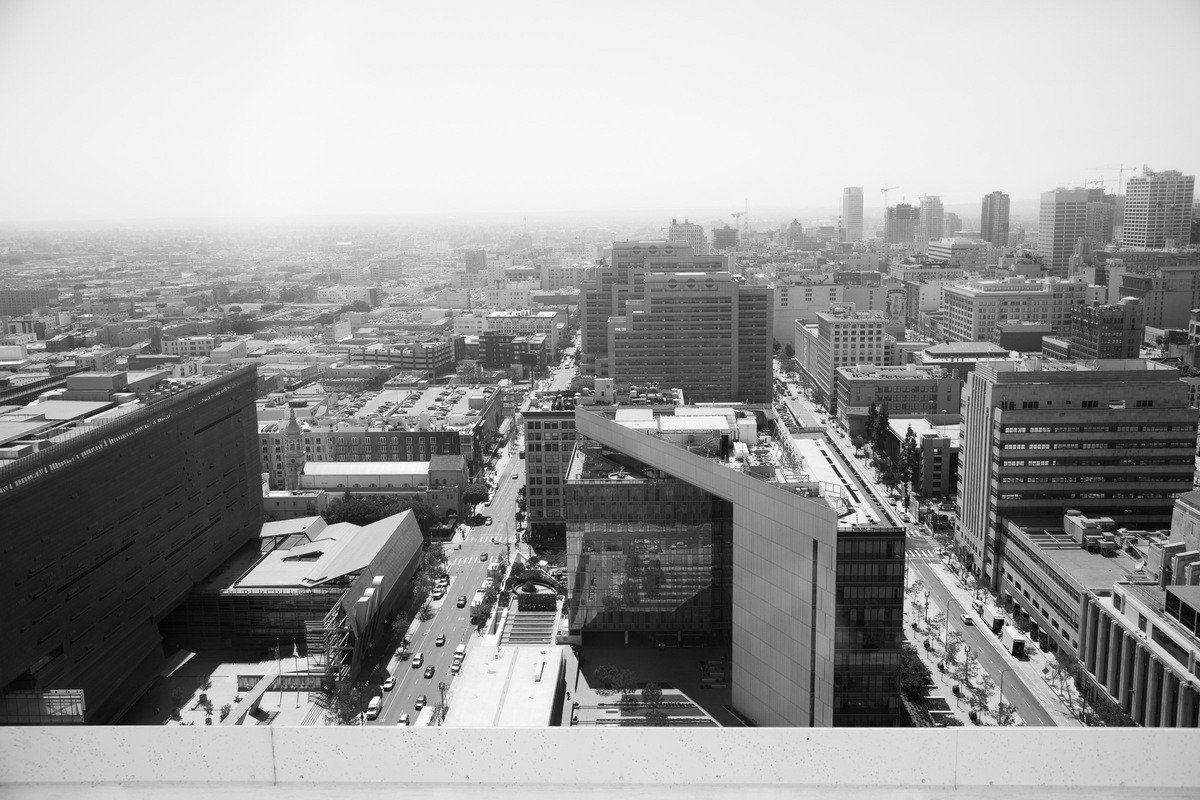 Rather than being at odds with the Internet, Snapchat’s Brent Davis argued that retailers will benefit from blending the virtual world with reality. Geofilters, the personalised graphic overlays Snapchat makes accessible at specific locations, are a powerful marketing tool for increasing foot traffic. Shopping, after all, has long been a social act but by taking the intimate experience of trying on and buying beyond the dressing room and into DMs, the social media messenger reaches well past word of mouth—with as much credibility. “One billion snaps per day include a geofilter,” estimated Davis of the overwhelming opportunity to turn visiting a store into a gamified experience for clients and their audience. 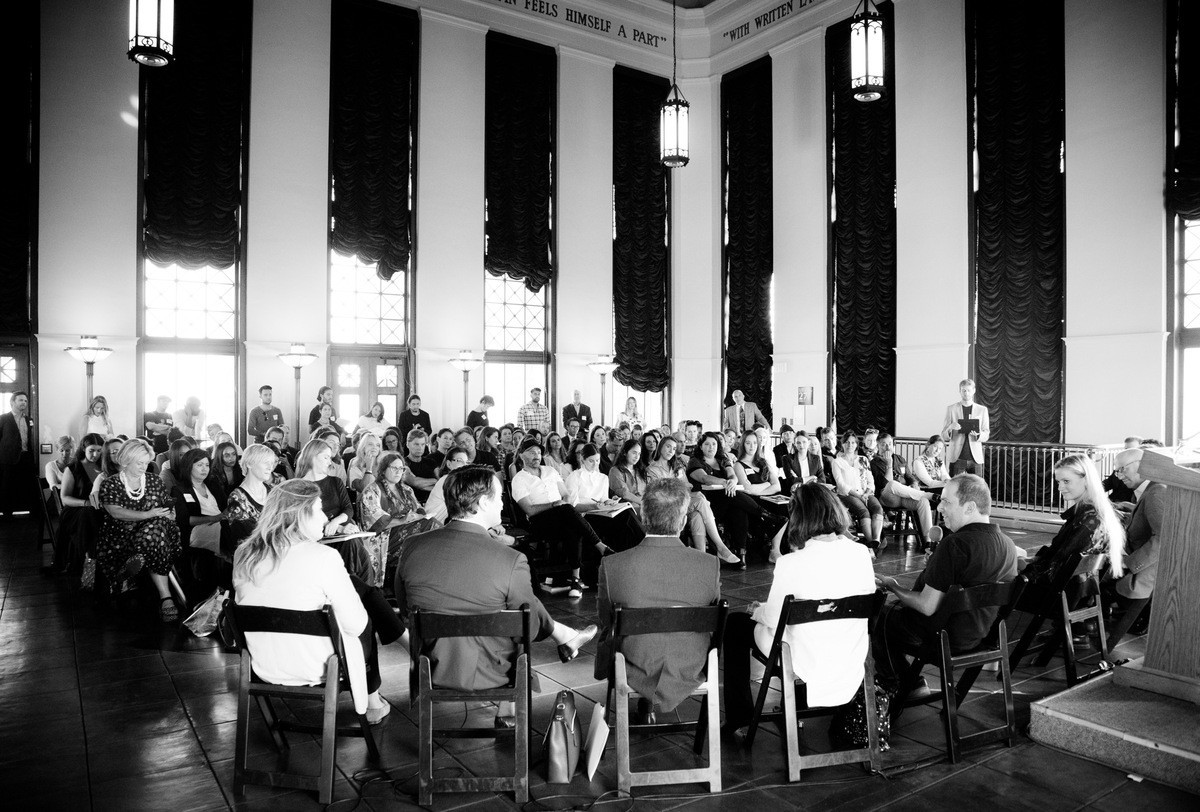 What millennials lack in their appetite for buying, they make up for in their insatiable desire for entertainment. Take, for example, the phenomenon that is Smorgasburg, the food festival that made a permanent home in Los Angeles last summer. Once a playful means of feeding shoppers at a flea market, the culinary outpost has taken on a life (and massive audience) of its own. The collection of over 100 vendors draws between 20,000 and 30,000 people per weekend in a single site alone, earning the nickname of “the Woodstock of Eating” by the New York Times. And in an unexpected role reversal, “the food vendors drive traffic to [flea] vendors,” according to Zach Brooks, the Los Angeles General Manager of Smorgasburg. 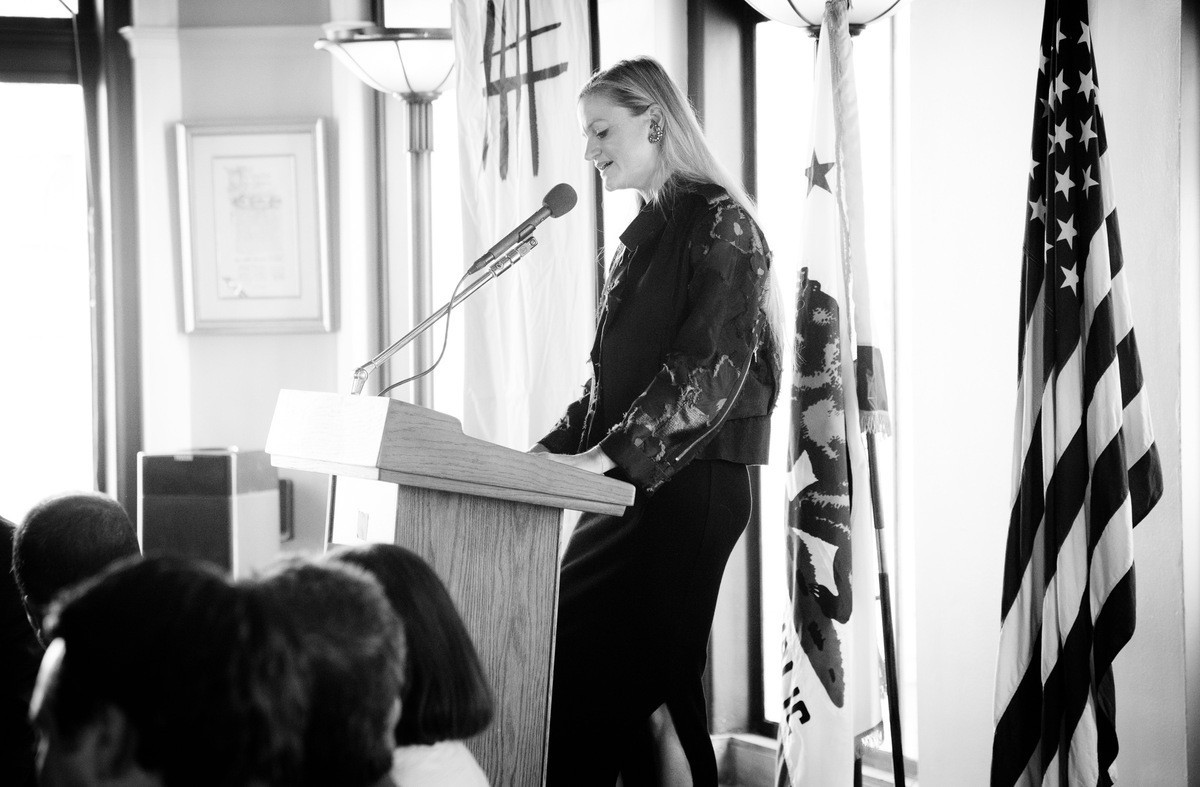 “Places like [Malibu] Country Mart, areas that bring people together,” explained luxury retail realtor Jay Luchs, Vice Chairman of Newmark Knight Frank, “are the future of retail.” Especially at a time where most errands can be completed with a tap of a mouse or a vocal command to your Google Home. “It’s not fun going to a street with 150 stores,” he added, suggesting that both landlords and tenants must work together to create new experiences in new and upcoming parts of a city. 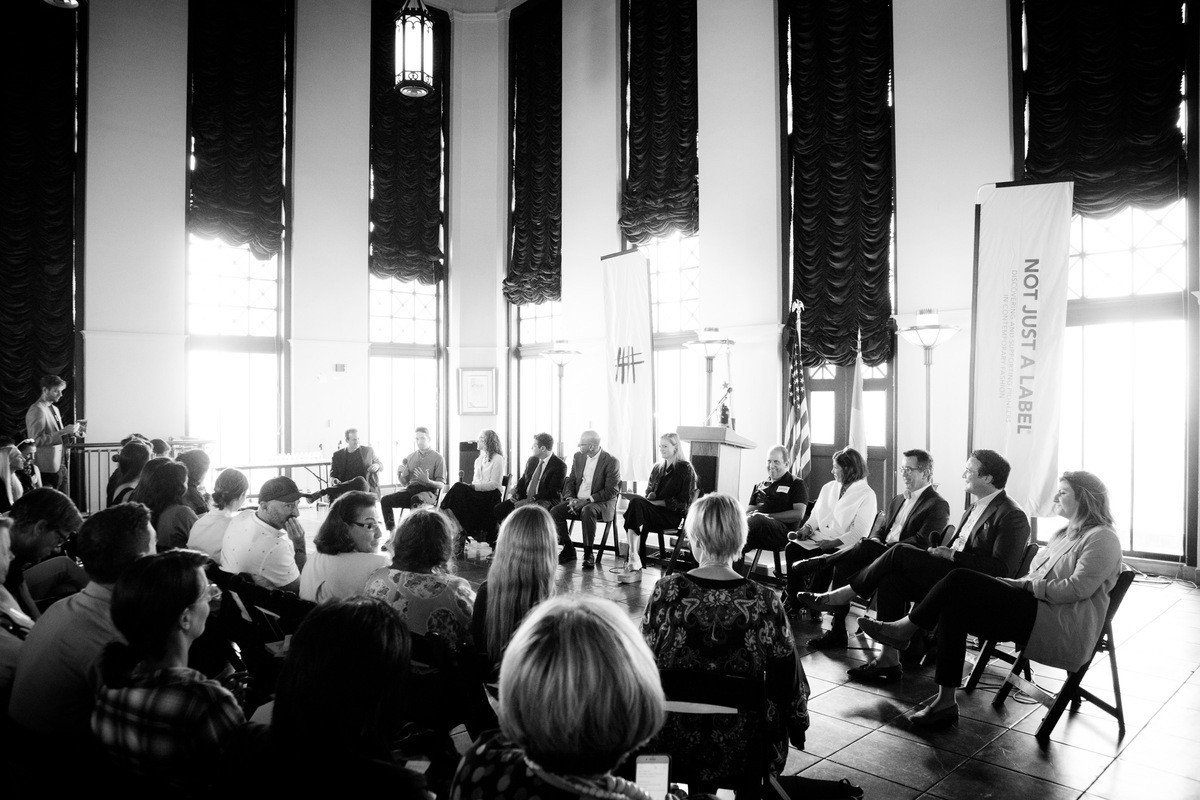 It’s a mutually beneficial fix, where small businesses not only thrive but also support each other, a tactic Detroit-based watch company Shinola has seen empower their invented heritage brand and their community. Jennifer Guarino, Shinola’s VP of Manufacturing, explained that they made the decision to not compete with Amazon’s instantaneous satisfaction a long time ago, instead focusing on making each brick and mortar outpost—and even their own factory—"an ecosystem" that brings together likeminded local talent. Shinola’s example of urban regeneration and local uplift can be potentially replicated in many cities, each with their own unique ecosystem and fashion narrative. “That value of human connection can’t be dismissed,” says Guarino. 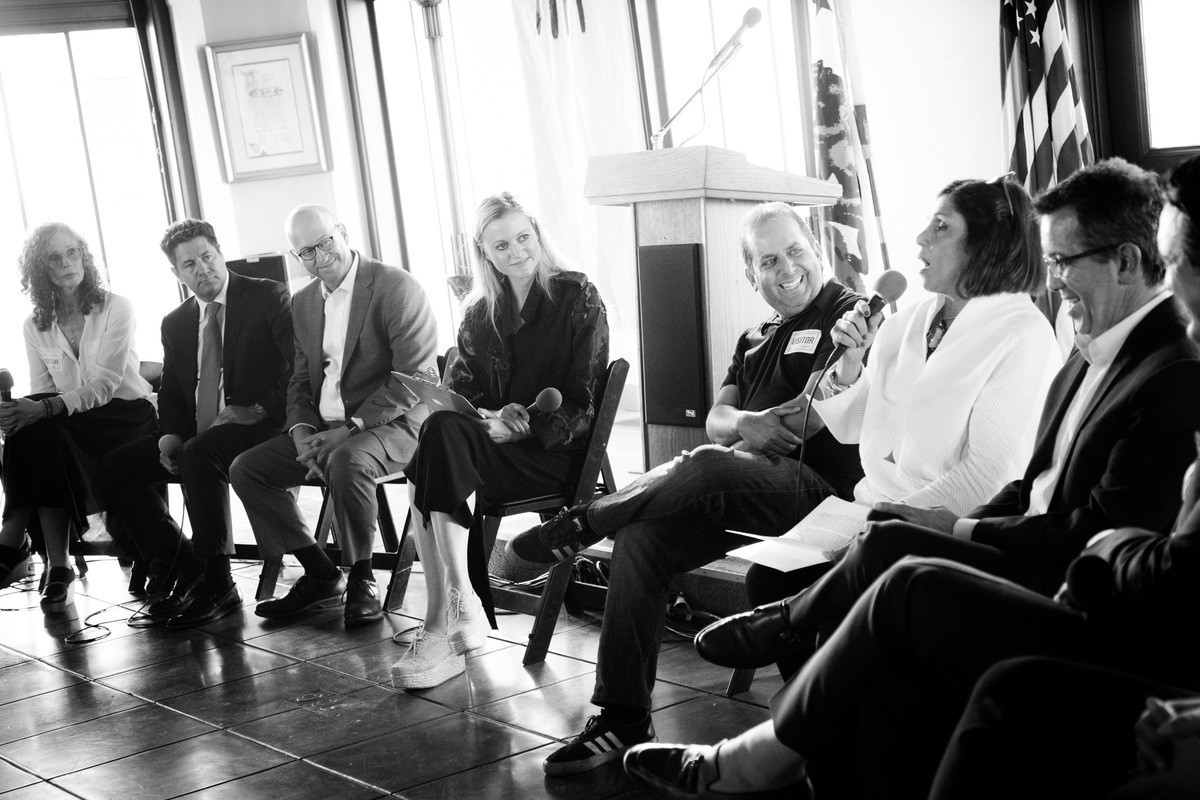 Neither should the element of surprise. Former Chateau Marmont Managing Director of 21 years, and forthcoming Managing Director of LA’s NoMad Hotel, Phil Pavel, helped build the Chateau’s reputation for a glamorous good time by running his business like a never ending night out. “A great cocktail party always has people outside of your world,” he said, noting that the Chateau’s staff wasn’t drawn from a pool of hoteliers, but instead from punk rock bands and theatre set design. “You have to give people a reason to jump in their car and drive there.” 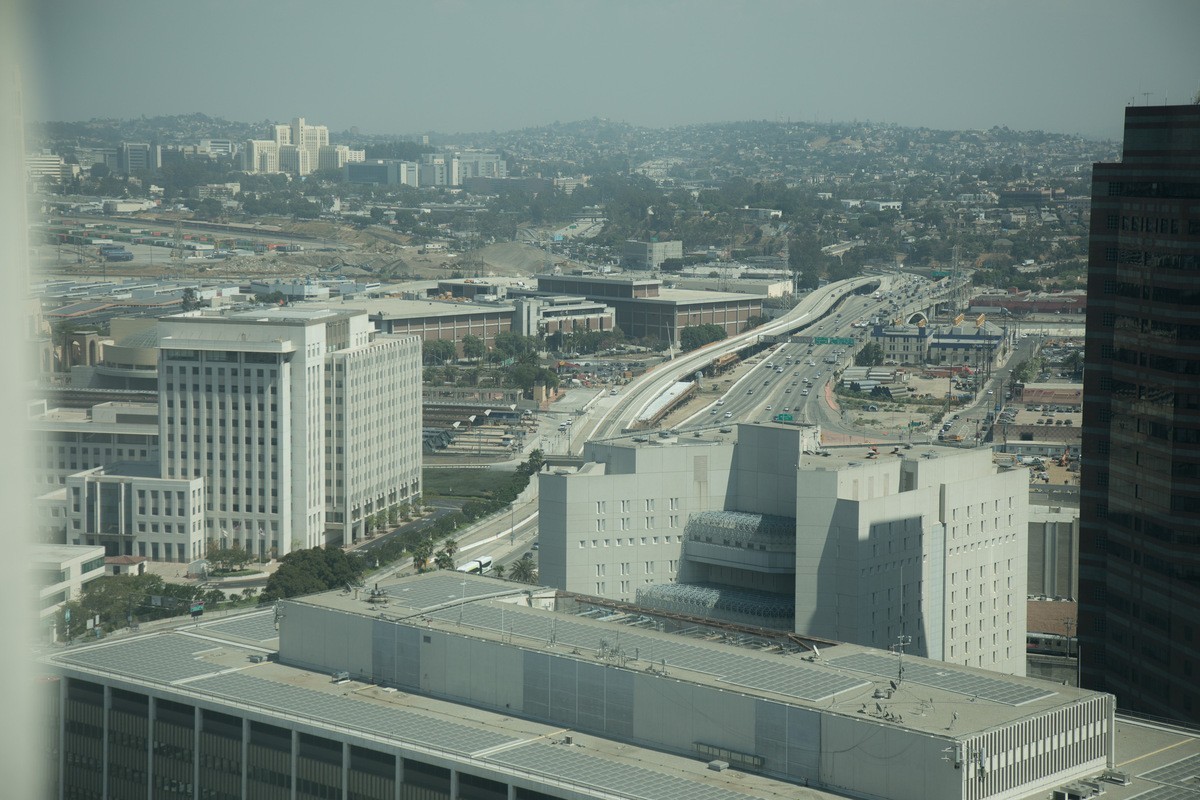 Driving, too, is about to become easier. Hyperloop One Transportation Policy Counsel, and former Chief of Staff at the Department of Transport, Dan Katz, was on hand to discuss the not so distant future of transportation, where self-driving cars and computer-controlled public transport will make traveling from point A to B safer and more efficient – for both consumers and packages. Of the 15 rapid transit lines that will be developed in Los Angeles over the next few decades, the first tubular transportation system is going to be operative within the next three years. Katz estimates that by 2030, enough self-driving cars will be on the street that traffic will cease to be a problem. “If it sounds like science fiction, it should.” 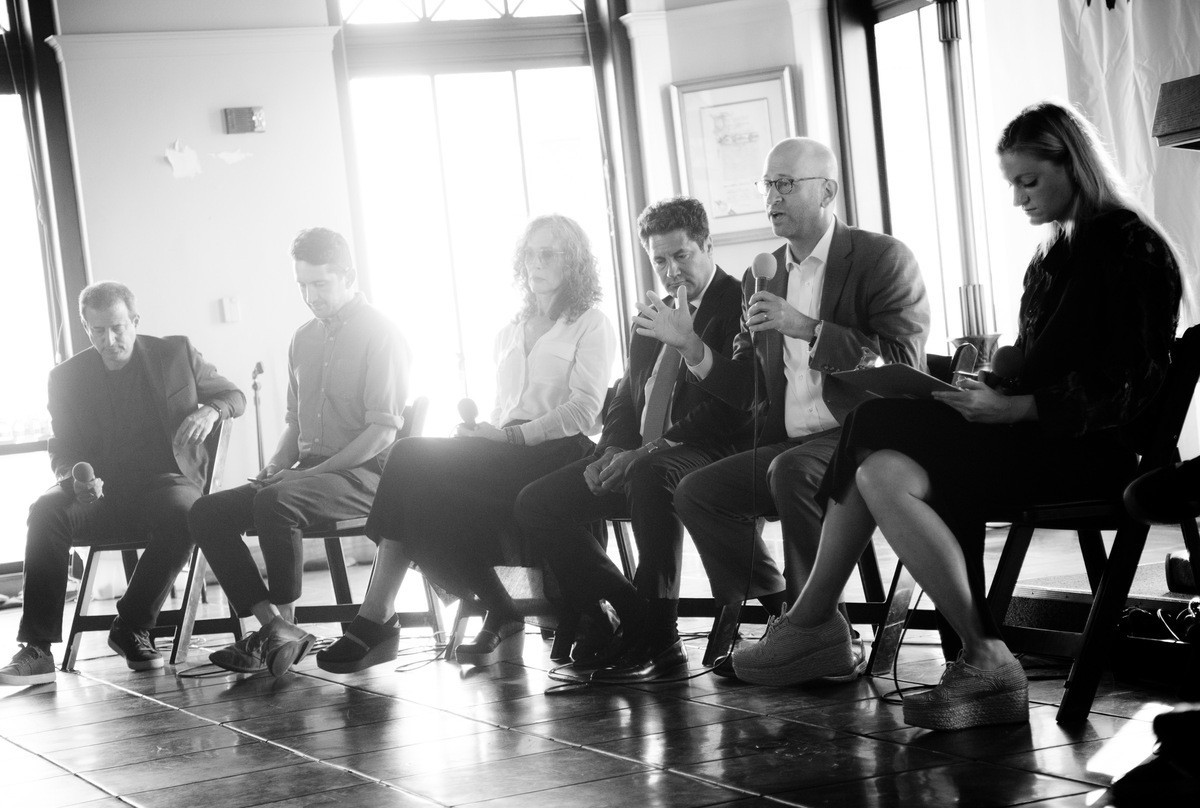 Ari Popper, Founder of SciFutures and leader of a team once called 'the coolest company on Earth', uses a panel of 100 renowned sci-fi writers to accelerate innovation, helping companies test drive the future. “Payment could become entirely seamless”, he said, meaning that everything from parking at a meter to buying that vintage gold lamé dress will no longer include wasting time standing in line. "Our cars will communicate with the parking meter automatically, our phones will know what you’re buying at the store and charge you, saving you the headache of waiting endlessly at a till, giving the shopper more time to shop, share, and live their lives." 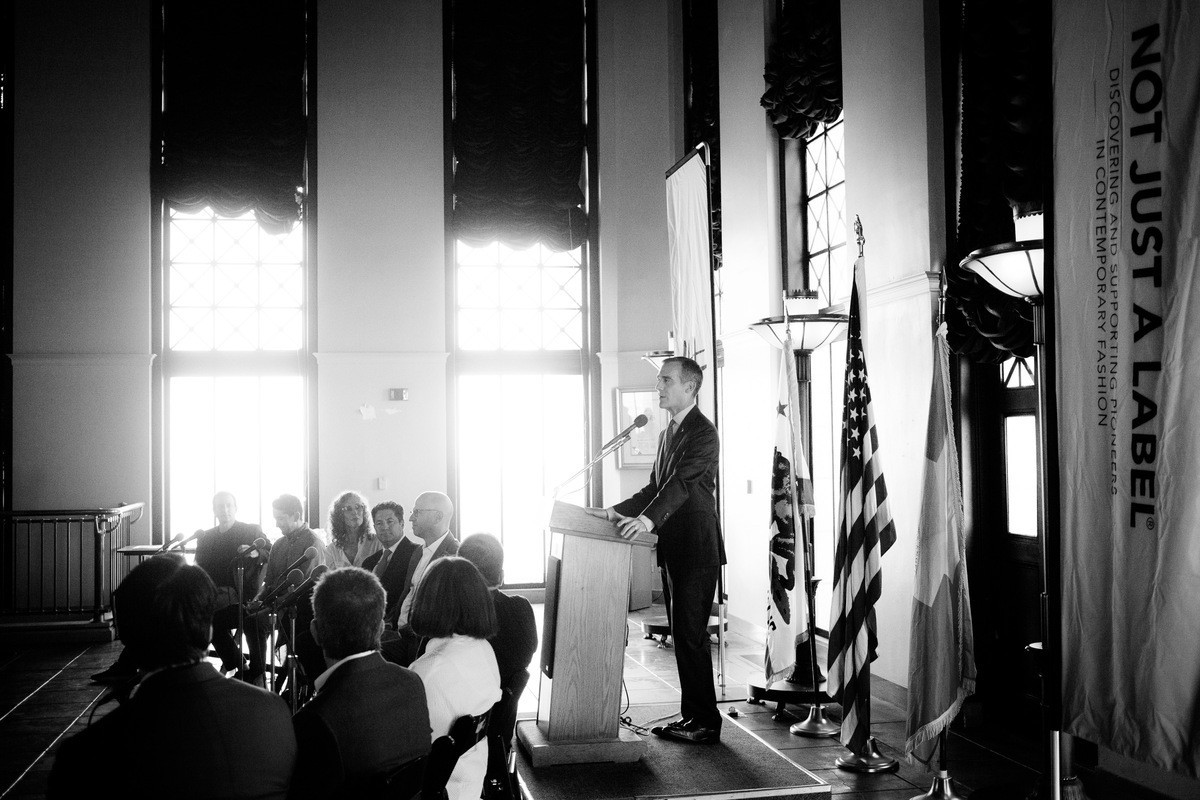 “The world has fundamentally changed and no industry is untouched,” Stefan Siegel concluded the inspirational panel. As a retailing crisis looms, real estate stutters, media is mistrusted and consumer habits shift – old assumptions no longer apply and new principles will shape growth. Los Angeles, however, has long been the nucleus for the creative industries, and is a perfect setting for a renaissance in retailing. NJAL’s expansion to Los Angeles aims at establishing an internationally relevant model for urban design and manufacturing, and ultimately redefining LA’s place on the fashion, luxury and retail axis. NJAL’s latest Authentic Radicalism event tackled the uncomfortable reality of dwindling retail revenues, loss-making ecommerce, and empty storefronts. However, the panelists demonstrated the will to define new concepts of retailing and new business models for retailers, brands, and cities, to take advantage of the consumer’s evolving desires and expectations. 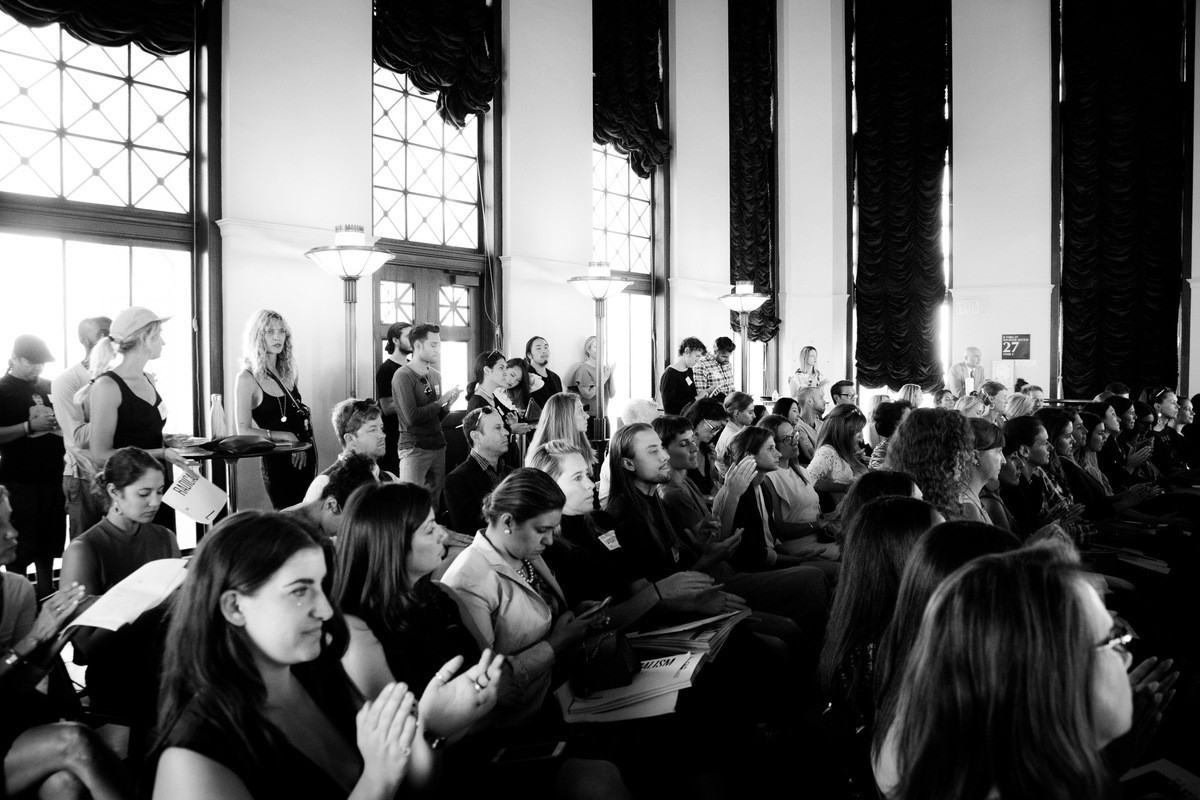 “It’s no longer an option not to think radically about changing the world around us,” Siegel remarked in Los Angeles, “but an obligation.”