Graduate of Amsterdam Fashion Institute. My heritage is based on my Ukranian Israeli and Romanian Hungarian parents who have raised me travelling between countries from a young age. This has allowed me to gain a mixed and open view on the East and the West. My style combines a flirtatious delicacy and feminine toughness while incorporating my love for textiles and digital prints. 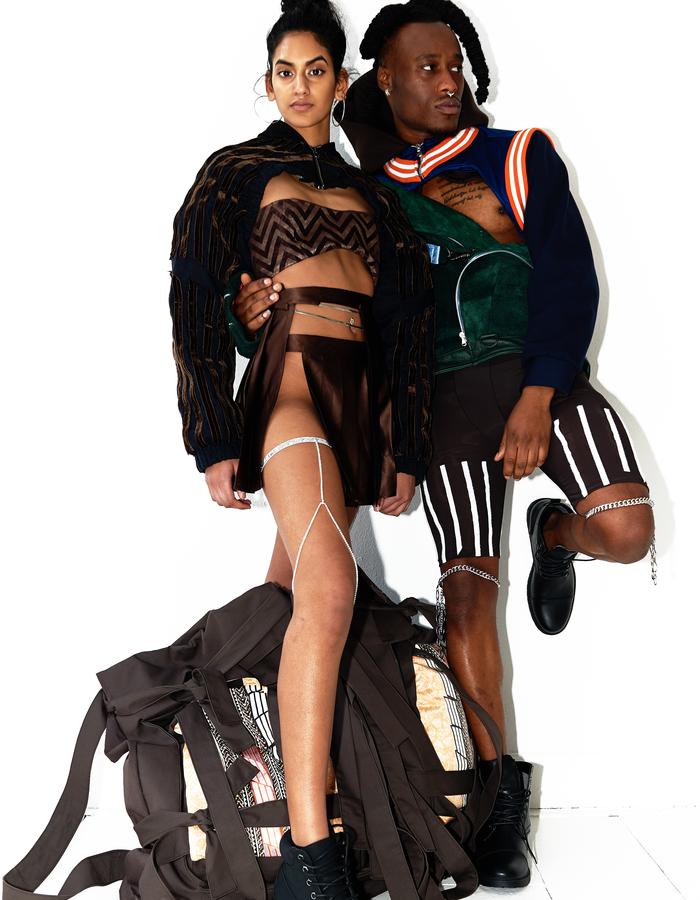 The DORIN RADVANY contemporary online-based streetwear luxury brand caters to both womenswear and menswear. The designs are ready-to wear, yet spin a fresh twist within details, prints and handcrafted textiles providing the zest behind the collection. The textiles specifically focus on digital prints and the traditional macramé inspired textiles.

By wearing the items produced, the wearer embraces two traits: strength and vulnerability. At the core of this brand, its vision is to appeal to women and men who want to combine an alluring sweetness with their assertiveness.

Even though the streetwear market has proved time and again of the masculine power it can bring, it has a place to be filled for the falsely dainty. This calls for those who empower themselves by embracing their delicacy.

Sabres; a term native Israelis refer to each other. The sabres cactus fruit has a hard and prickly exterior yet is soft and tender on the inside, much like how the people in Israel view themselves.
As a designer native to Israel I wanted to use a silhouette which is dictated by the liberated attitude of the people and the rigidness of the IDF army.
Living in a desert country, naturally, their clothes cascade off the body and underwear becomes a form of outerwear; highlighting references to lingerie; a key principle. The sensuality, freedom and delicacy I wanted to emphasize highlights the core of my brand- these terms are ones I associate to strength.
The contrast of this uninhibited outlook within the country in relation to the idea people have of war there, further emphasizes the ridicule in the blind global perspective mistaken of Israel: that only of war. References to war include gun holsters which sling across the body and instead of creating a stricter look, are used to highlight the causal feel of the clothing by barely strapping them onto the body.
The base fabrics used point to underwear as outerwear and create a vulnerable and light feeling. They are contrasted with a harshness of leather, suede, padded materials and canvas.
On top of these plain fabrics are prints which allude to dazzle ships- a type of WWI camouflaged ships. Conceptually, the camouflage illuminates the confusion of the media and people who follow it blindly. The prints come in the form of digital prints on satin and with stitched on Velcro. Macramé also comes as a hint to Israel’s roots as an ancient middle-eastern technique. They are graphic and repetitive, acting as an extension to the dazzle ships digital prints.