Born in a city, where dress-was-uniform, the designer behind Dhenze saw a great deal of change while growing up in communist East Berlin, later to become a unified city. Shaped both there – Berlin – and in London, the brand’s philosophy and aesthetic, always has been to go against social norms of dress, style and design.

The vibrant counter-culture of the electronic music scene and the fetish clubs combined with a darker colour palette are the pillars of the brand since it’s first beginning.

For the designer, parallels are drawn between those two major cities – Berlin and London. Here, and through a multilayering of similarities and differences, Dhenze draws out value statements on both cities, with references to their iconic status within the world of design, architecture, culture, and counterculture. These include, quintessential tailoring, flavours of an urbanised East End London, alongside references to both Berlin’s casual European lifestyle and beating underground fetish scene.

Trained in pattern cutting, and with experience of spearheading fashion events, happenings and shoots, Dhenze recognizes a need for well-made, luxury fashion. The garments then – whilst with an overarching uniformity – uses patterns, shape and a darker colours palette, to place itself at highest level on the Avant Garde fashion scene. Furthermore, using only superior materials, the revealing and concealing of flesh through design, proposes a seasonless, minimal and gender-neutral appeal. In fact, since the first collection, DHENZE has been proposed as a genderless brand and in today’s political and global situation, where diversity is seen as an imperfection, we stand more than ever with all those people sui generis.

Above all however, Dhenze seeks to create armour that both protects, and makes vulnerable. This duality and opposition, is itself, the lifeblood of the brand – a brand, aesthetic, and philosophy that celebrates the uniqueness of self-expression, and personal style. 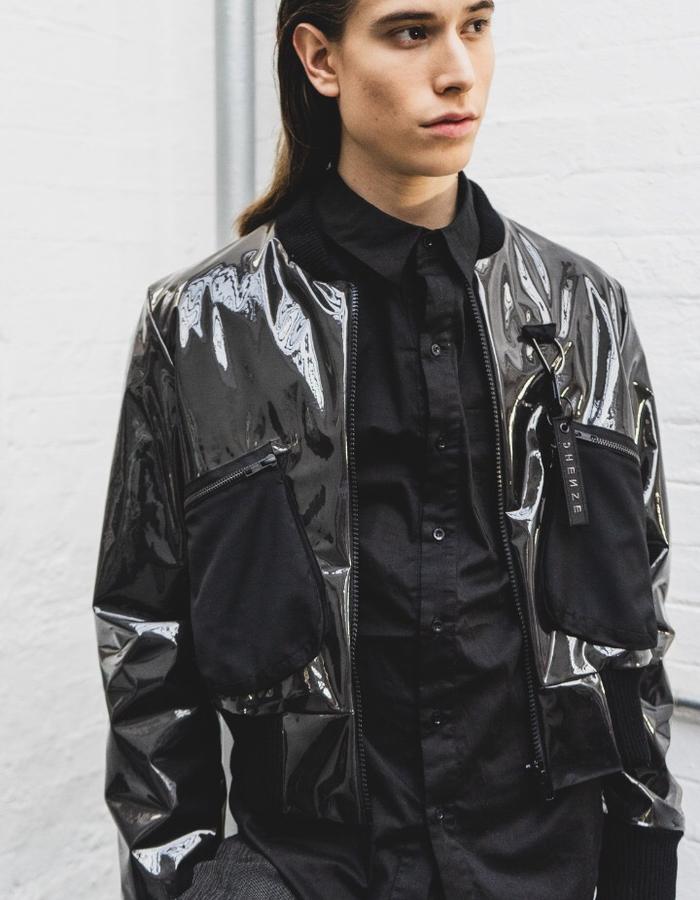 INSPIRED BY THE CYCLE OF THE VIRTUAL WORLD AND THE REALIGNMENT OF NATURAL ENERGIES - BREAKING THE CONNECTION BETWEEN OUR DIGITAL LIVES AND IRL. KOLLEKTION 05 EXPLORES THE FREEDOM OF LEAVING REALITY IN PHYSICAL FORM WITH REBEL RETROSPECT. KOLLEKTION 05 EXPLORES THE MANIPULATION OF PROPORTIONS THROUGH A BONDAGE STRUCTURE. KEY LOOKS INCLUDE TAILORED ITEMS THAT ARE ROOTED
IN SUBMISSION – FUNCTION, AND FORM GO HAND IN HAND. CLOTHING THAT PRESENTS FORMS OF SUBMISSION AND PROTECTION, FORESHADOW THE FLOURISHING OF VISIBILITY IN SOCIETY THAT DOESN’T SUBMIT TO THE SOCIAL NORM - THE INNOVATORS OF A GLOBAL MOVEMENT. AN EARTHY, NATURAL PALETTE WITH DARK UNDERTONES SIGNIFIES OUR CHARACTERISTICS WITH THE BLACK ORCHID. THE MYSTERIOUS BEAUTY, SIGNIFYING GREAT POWER AND ABSOLUTE AUTHORITY THAT COMMANDS SUBMISSION, THE SAME AS SUBMITTING OUR LIVES TO SOCIAL MEDIA.
DARK AND MYSTERIOUS THEMES ARE EXPRESSED THROUGH DARKER CLEAR RESINS, SHEER QUALITIES, RICH EMBROIDERIES, AND SCULPTED METAL AS CRACKED TEXTURES AND FREE FORM STRAPS REPRESENT THE FLOURISHING OF VISIBILITY IN TODAY’S SOCIETY