Founded by David Ferreira, the singular Lisbon-based brand immediately won enormous demand and became distinguished outside the capital city.
David enjoys boundless creations, each idea is carried out and explored to appeal to the taste of uncommon women, who trust their own style and are particularly fond of clothes that work as an extention of themselves, linking the fine line between fashion and art.
David Ferreira celebrates the unparalleled beauty, the individuality of each human being, emphasising the fact that uniqueness represents luxury’s true meaning.
David Ferreira’s pieces play with the shape of the woman’s silhouette, creating a visual poetry that blurs the lines between elegance and grotesque.
He worked for designers such as Iris Van Herpen, Meadham Kirchhoff and Giles Deacon which shaped his culture, skills and techniques in order to unfurl
brand new silhouettes embodying a modern vision of the Couture concept.
Defining uniqueness as the true meaning of luxury, Ferreira portraits the feeling of holding uniqueness in the highest regards.
Since David’s graduation his creativity has been celebrated and awarded: VFiles MAde Fashion New York City, Fashion Scout Merit Award London and Les Etoiles Mercedes-Benz Paris.
David Ferreira go above creating admirable designs: it’s the unique experience the brand provides that set David apart. The ability of providing emotions creates a
memory for life in our customers. It’s the rarity in David Ferreira signature that makes it an unique experience.
David does not look for ordinariness, instead he searches for ideas that make women have a more affirmative stance
in society, without being afraid of shocking and, above all, those who have the will to stand out among the masses.
His clothes are a statement of strengh and technical ability. 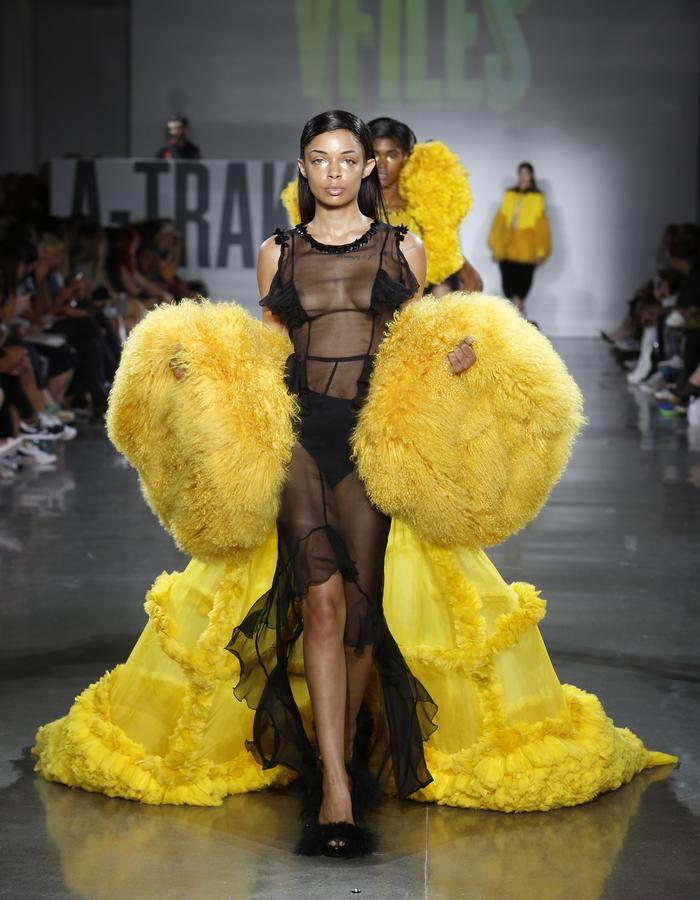 SEMPITERNAL collection is the wardrobe of an imaginary Muse, who is a modern version of Sally Potter’s Orlando, a time traveller who is deeply marked by her roots in the Chinese Qing dynasty. Particularly inspired by Empress Cixi of China.
The aesthetic of SEMPITERNAL was also influenced by practices such as foot bidding, slow sliding and corsetry.
David Ferreira SS16 vision plays with volume and textures. The volumetric of the collection is created with the use of boning that results into the most extreme silhouettes. The hand stiched ruffles in chiffon and organza as well as the use of Mongolian fur add volume and texture to the pieces. The hand-embroidered sequins is inspired on the slow sliding practise, creating an unique and edge look to the beadwork. It represents the paradox between hard and soft, delicate and rough.