It seemed at first that jewellery design would be a creative outlet for Sevag Dilsizian, a way for him to hammer out his emotions in precious metal. The only obstacle was his creativity, which flourished while his material became more restrictive; pricey gold and diamonds are a limiting medium for experimenting with what Dilsizian calls ‘going to the extreme.’ Three years ago, in Lebanon, after 24 years of designing jewelry for international labels, Dilsizian made the decision to give up designing under someone else’s vision and to finally put his signature on a collection of rings. It would be three weeks spent reflecting in the studio – there would be no sketches, no predetermined concepts – before his first ring would be finished. It was titled Cage.
There was no plan to sell the original ring, or the pieces that followed, until the entire Story Metal (CU) collection under his new DAS brand was complete; designing was as much about the process as the end result. Every day in the studio was worth an hour on a psychiatrist’s couch, a therapeutic way for Dilsizian to exorcise his demons, pouring out his heart and soul into a collection of hand-moulded industrial rings that range from clean and simple to intimidatingly complex.
At Starch’s 2012-2013 launch, 28 DAS pieces were arranged on metal pedestals, each with a story hanging on a tag beside it. The collection read like a series of diary entries – the Unfit ring expressing ‘the turmoil of being an outsider’; the Obstacles ring reminding its wearer that ‘a path without obstacles does not lead anywhere’; and representing the mentality of Middle Eastern families. The Separation ring has symbolically found a permanent place on the designer’s own finger. Given the hard, industrial aesthetic of the unisex collection and the sentiment behind it, Dilsizian correctly assumed it would appeal to men in their twenties and early thirties. Much to his surprise, though, his fan base sometimes skews much older. ‘Clients over 50 are the ones who compliment me the most,’ he says. ‘They say that they’re sick of seeing the same things everywhere, and that they’re proud that someone is changing the concept [of local jewellery].’ Fashion’s in-crowd seems to agree; London-based ‘cult couturier’ Ziad Ghanem and even queen of androgynous cool, designer Isabel Marant, have been spotted in his pieces. 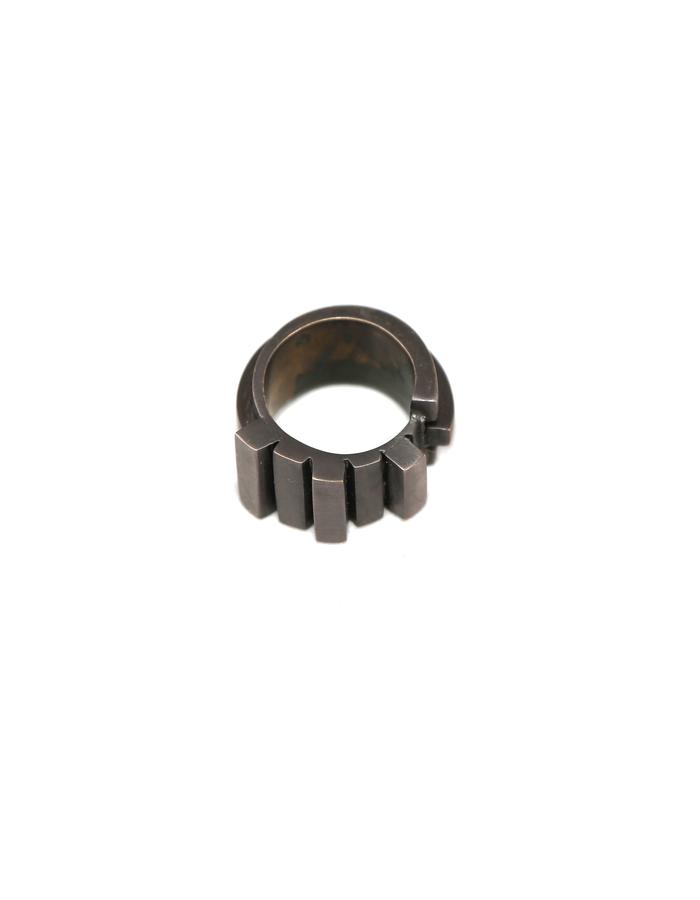 STORY METAL (Cu)
The inspiration for the Story Metal collection was my inner struggle. I’ve tried to convey an idea through each ring. Whether it’s “The Split” or “Trapped”, the movement of the piece should show you the feeling behind it.

BALANCE
Both darkness and light are equally present
in all. It is the delicate balance between the
two that harmonizes them. One does not exist
without the other.
LEVELS
With each stage of “Levels” its depth and
complexity is reflected by the width of the steps.
Some are empty and short-lived, but they are
all part of the journey.
OBSTACLES
As the road moves forward difficulties multiply,
but a path without obstacles does not lead
anywhere.
FU
The system is meant to be broken. When no
other words will do, two letters can say it all.
CONNECTION
Success is not a solo endeavor. The human
connection is the key.
THE SPLIT
What might seem like a split decision is
not always so. It wasn’t the last blow of the
hammer that cracked the rock but all that had
gone before.
UNFIT
The inner turmoil of being an outsider is not
always bad but neither is it easily expressed.
ENDLESS TWIST
The spiral continues and with each new rotation
an unexpected twist of fate awaits.
STRUGGLE
Progress rides on the back of struggle and the
aftermath of tireless effort is strength.
SHIELD
Overcoming adversity is always a path towards
self-discovery and creation is a shield.
SUCK-CESS
A condition that exists in people’s minds – when
overt success balances on the nose of a nail.