DANIEL.SILVERSTAIN is a global fashion brand based in New York City. Fascinated by modernism, DS creations aim for innovation and essentiality, exploring textiles and natural forms in an era of hi-technology and industrialism. Inspired by Retro Futurism - human kind point of view on the future in the past - each season aspire to present an optimistic and positive outlook to our future. Architecture and art of the mid-20th century interlock with every inspiration and are used in a range of simplified shapes that compliment the body and give it a sophisticated, yet comfortable look.

Daniel Silverstain, a former musician and record artist from Israel, discovered his passion for design on a trip to India where he practiced in knitting, screen-printing, and jewelry making. Daniel began his design career in Israel 2007, serving as the Visual Merchandise Director for the Israeli branch of popular label KEDS. In 2009 Daniel moved to New York in order to complete his studies at the Fashion Institute of Technology. While still an undergraduate, Daniel was selected to collaborate with the Danish-based fashion label Muuse, a fashion group that partners with emerging young designers from around the world to produce their collections and sell them to the public. Early in his career, Daniel worked with the design teams of renowned fashion brands such as 3.1 Philip Lim, Calvin Klein Collection, and Elie Tahari.

In 2011, Daniel was chosen by Vogue Italy as one of Muuse’s Top Ten Most Promising Designers. Soon after, he was selected as a finalist in the ELLE Fashion Next fashion show, an exclusive runway presentation featuring the next generation of New York fashion. In 2013, Daniel was recognized by the CFDA “for his outstanding achievement in Womenswear Design”, and awarded a member of the CFDA+. Daniel has dressed top international artists such as Solange, Halsey, Michelle Monoghan, and Lady Gaga, was selected by Refinery 29 as one of the "8 new designers to bet on in 2015", and Chosen by Marie Claire as one of the “Best Emerging Designers for 2016”.

Most Recently, Daniel was selected to participate in the 20th Anniversary of GEN ART – Fresh Faces during New York Fashion Week, and was awarded by leading industry professionals as the winner of the Incubator Award with Gen Art.

“I design to inspire to be bold, to be courageous, to standout, and to create a story of your own.” – Daniel Silverstain 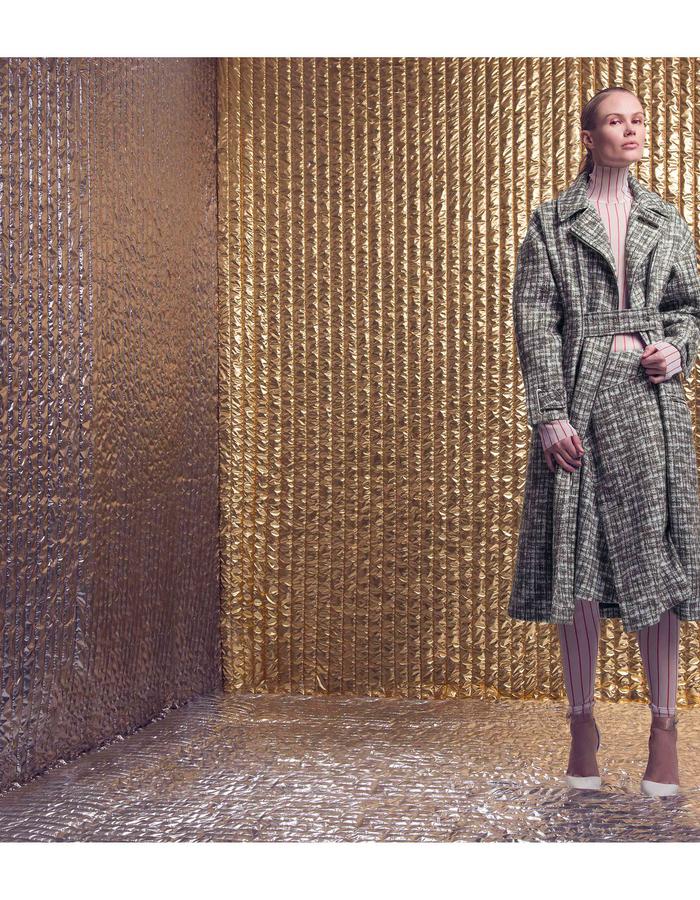 The WHITE.CITY collection was inspired by the Bauhaus movement and it shape of the central metropolis of Israel - Tel Aviv during the 1950’s. The Bauhaus had a great impact on the Modern Movement in architecture, embracing functionalism and rationality, while condemning ornament – a very prominent design element in the Middle East.

The collection is a reinterpretation of a movement that brought futurism and modernistic approached into a city located between the desert and the Mediterranean Sea. Following the architectural style of the modern movement, which called “The International Style” or “Bauhaus Style”, the season is characterized by asymmetry, compositions of primary volumes—cubic and rounded. Prominent elements of the Bauhaus like Narrow ribbon windows, thermometer windows, and balconies, were translated to pin stripe fabrication bonded on scuba, geometric wool jacquards, and play of belt and Large elliptic eyelets.

The collision between the middle-eastern life style and visual landscape of Israel, versus a complete opposite discipline, which calls for minimalism, clean lines, and logic - was the main focus of the design process. According to this discipline, all arts, as well as new technologies, should be combined in the art of design. All is presented with mix of modern techniques applied on natural materials and old-fashioned methods; Shearling skins were embossed and coated with patent gloss in pastel colors, Pleated Jersey was laminated and laser cut in jagged lines, Velvet and French-Terry were bonded and turned to structures pieces.

The silhouettes are minimal, moving from easy to wear boxy shapes, and synched waists for more feminine direction, all with great emphasize on functionality, comfort, and wide range of season-less items for variety of climates.

“The social-cultural ideology behind the “Bauhaus Style” fit like a glove to the socialist-Zionist movement and to the striving of this movement to create a new world. White houses, in every sense—form, style, material, functionality, and color—grew from the sands without a past, towards a future.”