September 1st 2021 - Creed fragrances collaboration with CUNNINGTON & SANDERSON for their international campaign for fragrance 'Aventus for Her'.

June 10th 2014 - Invited to be on the Jury for Sheffield Hallam University Final Degree Show.

November 2011 - Invited to showcase a selection of their womenswear collections at Mados Infekcija in Lithuania.

October 2010 - Selected as finalists for the Mango Fashion Award, exhibiting their collection entitled ‘Omitted’ on the Passeig de Gracia in Barcelona.

April 2008 - Matthew was awarded the Grand Prize of the Jury at the 23rd Festival International de Mode and de Photographie at Hyeres, France. 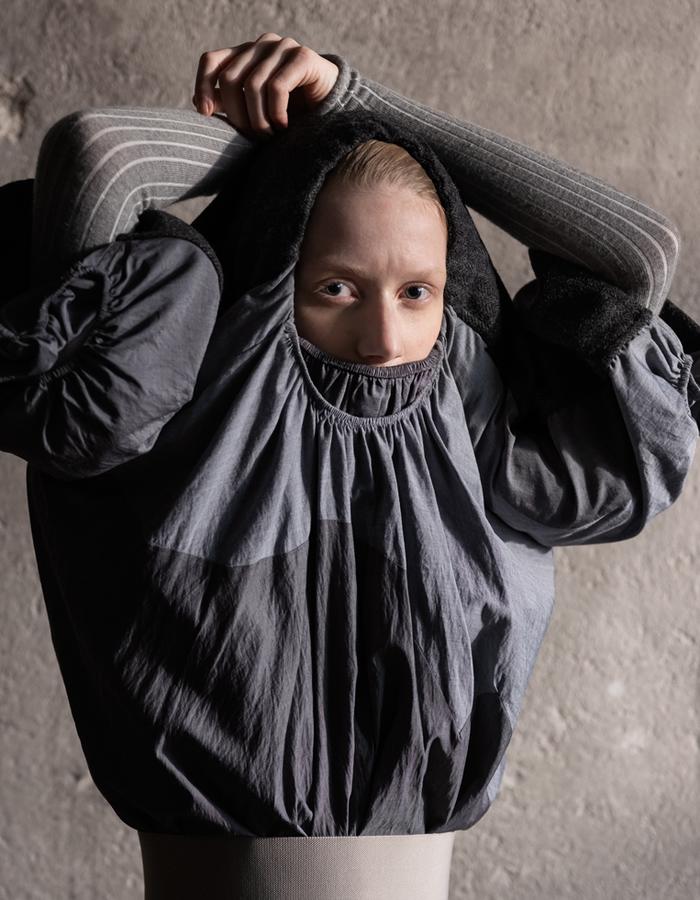 The ‘Occupied’ collection showcases the story of wearing the emotional burden of depression.

The heart of the narrative aims to help tackle the stigma surrounding Mental health & to give hope and encouragement to others. The emotional burden of depression is broken and worn as everyday clothes, when non-conformity is celebrated & no longer hidden away.

FEELINGS OF HOPE & other emotions ASSOCIATED with battling against this silent & dark force, ARE DRAPED by hand & constructed INTO THE DESIGNS & details of the garments. Each & every creation has its own unique & personal characteristics & story to tell.

THE BED CAN BE A SOLITARY SANCTUARY. BLANKETS, PILLOWS, & BED LINEN ARE ATTACHED & WORN AS EVERYDAY CLOTHES. LAYERING OF GARMENTS APPEAR TO BE MISPLACED & uncared for to SIGNIFY FEELINGS OF CONFUSION & disoray, CARRIED & WORN for all to see & NOT HIDDEN AWAY. DO NOT BE AFRAID TO WEAR YOUR EMOTIONS.

Constructions are not always as they first appear. A tailored wool jacket is worn in the style of a skirt with the sleeves used for pockets, sweatshirts are thrown on the floor and pilled together to be transformed into a gown of jumpers, and a pillow top which can be worn padded or unpadded is tailored internally and externally to give form and strength as well as being comforting. Detailing such as a knot which symbolising hope and good fortune is enlarged and draped around the body of the wearer in the knotted dress, while the laundry dress has gathered elasticated trimmings inspired by bed linen to capture emptiness & hollow volume of what once was. MONOCHROME GREY DESENSITISES ALL SURROUNDINGS, EVERY GARMENT IN THIS COLLECTION IS MADE IN TONES OF GREY TO SYMBOLIZE THAT IT IS OK NOT TO BE OK.

COMFORT IS FOUND IN THE NONCONFORMITY.