CUBEL is a men's designer brand that combines experimental craftsmanship and urban aesthetics. It highlights the stories of warring and pre-Hispanic cultures through avant-garde design and textile exploration. Our creative process builds upon a business model and sustainable practices, working with artisan communities and including their materials and technologies; working between natural and recycled certified fibers.

Since 2015, we produce locally in the city of Bogotá and places like Barbosa, Santander and Zipaquirá, Cundinamarca. Each handmade piece undergoes different processes, from embroidery, to weaving and to graphic abstractions, we design original prints in collaboration with local artists – all as a tribute to the craft tradition.

THE creative processes weave together urban aesthetics, experimental craftsmanship and avant-garde design. Our work integrates the representation of pre-Hispanic Latin American cultures and ethnicities, respectfully preserving their stories, that bring consumers closer to history and to the extraordinarily diverse legacies of Latin America.

As an independent and authorial brand, we seek to promote practices that build a sustainable language. We do not believe in percentages, but in actions and decisions that wield a long-term impact on our community, customers, partners, employees, staff and the environment.

Cubel seeks to break new ground in the design industry through the creation garments that represent new identities that move away from the traditional but that also find their inspiration in Colombian craftsmanship. Each piece is a modern and alternative interpretation that always seeks to exalt craftsmanship by applying and mixing different techniques. Creating textures inspired by nature for men and women who seek and wish to express their strength and leadership; this project is designed for modern, urban and avant-garde people. Each creative process is in constant evolution through millenary cultures, textures, designs, colours and shapes. Creative work with women artisans from Zipaquirá cundinamarca and barbosa santander, DESIGNER'S PLACE OF BORN.

CUBEL has been in different commercial spaces and fashion platforms, achieving in 7 years since the creation of CUBEL, different goals that place it as a brand that projects international design with the stamp of Colombian heritage. Mixing technology, avant-garde futurism with techniques that heal the traditional techniques of our artisans and cultures. Its artisanal approach intersects with trends and places each piece in a differential level to traditional craftsmanship. 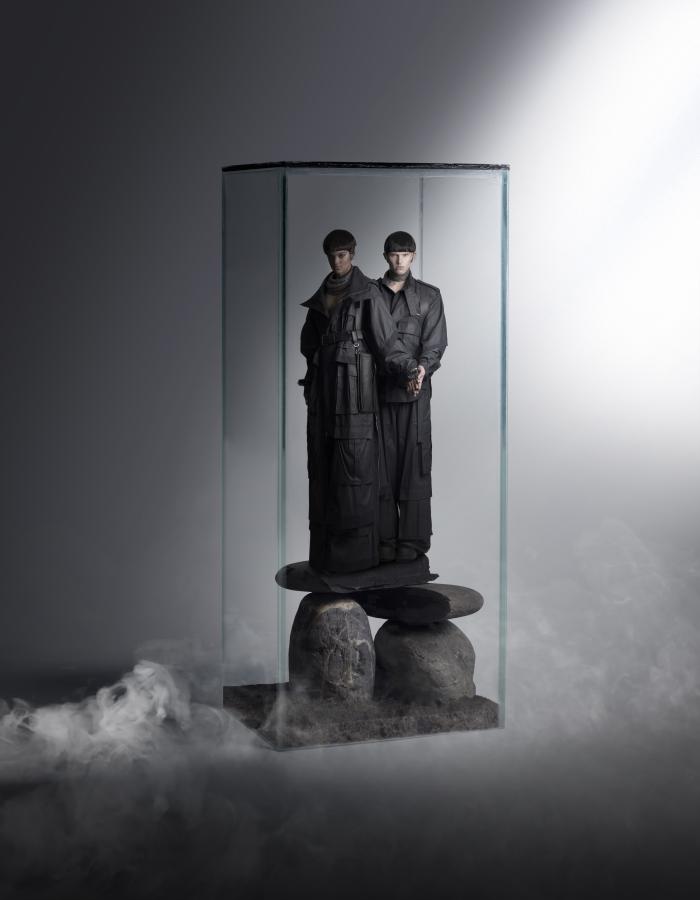 For more than 500 years of history, indigenous communities have fought to protect and preserve their origins and beliefs, to keep the roots of their generations alive. This struggle has brought on massacres and has erased their histories – from the conquests and colonization that tried to destroy their cultures to the current political conflicts that affect their development within society.

From our position as a design brand, we have taken as inspiration indigenous cultures that represent that spirit of strength ­­– figures of warriors who have defended their lands and people. This is what gives coherence to each collection.

To date we have reviewed Latin American indigenous cultures such as the Arhuacos, Mayas, Aztecs, and Quimbayas. And we have followed the stories of representative warriors and chieftains of these cultures, such as Pakal, including in our designs anthropomorphic figures embroidered by hand on garments that resemble armor. On this opportunity, we arrive at the term "HUACA" to communicate our desire to protect and preserve culture through design. The indigenous people stored gold and other riches in their burials, and these sacred objects were later found by the "huaquería," a practice that became popular at the end of the 19th century.

This collection is a way of honoring those sacred objects and symbols, of summarizing the cultural baggage that our brand references in each collection, rewriting stories out of our vision and imaginary. We mix urban aesthetics with the exploration of craft and with artistic practices such as painting, embroidery, illustration and textile experimentation. This collection is aimed at memory, legacy, and their various avatars in modernity. We use new printing techniques on fabrics, creating high relief textures of illustrations made by the hand of artist Sebastián Mejía. On this relief you will see goldsmith hands, as well as the illusion of good and evil.

This work allowed us to create another version of print, which, by means of digitizing on the fabric proper, brings to life another dimension in the garments: the representation of the sacred and profane figures of QUIMBAYA culture, known for the goldsmithing of bodies and figures in gold and copper that evoke not just the sacred, but also the individual's relationship with society.

The silhouettes follow and extend the Futuristic Craftsmanship aesthetic – multiple pockets that represent the difficulty of crop-planting and the “HUACAS,” the work on the land and the memory left by the goldsmith practice of the Quimbayas and their migration to new territories. Increasingly, the brand is moving away from the division of garments between masculine and feminine. We don't want to talk about genres. We only want to dress bodies that are armed with new strength and character through our clothes.

The accessory collection features leather harnesses that represent the oppression of slavery and involuntary hard labor. We include the technique of weaving with two needles, a manual loom, and the contrast of materials and patterns, forceful hardware that forges the weight of our garments. Among the fibers are recycled cotton, denim, cotton, and ramie – a new exploration we do with a natural fiber. The collection also features an original print, creating a kind of collage of figures that represent Quimbaya culture: this blends onto black and white tones, pieces in taupe, green and gray, as well as blue tones that tend to be the protagonists of the collection.

Presenting a collection at New York Fashion Week is a new milestone for Cubel, and for Colombian fashion. This is why this collection wields multiple languages in its design – intent on conquering new markets, on finding a more specialized audience, on emphasizing individual and collective authorial design, and on strengthening different product lines. The Cubel brand also includes sustainability processes: Humberto has managed to combine his aesthetic pursuits with the family craftmanship tradition in his brand. He has developed work plans such as adding certified textile suppliers that produce recycled and organic fibers. From the beginning, he has also worked with groups of artisan women and men, and with weavers and embroiderers from areas near Bogotá such as Zipaquirá and Barbosa, Santander (the designer's place of origin).