Caitlin Elton is an Australian contemporary fashion designer and textile developer living in Melbourne, Australia. Elton's work is conceptually driven design with a particular focus on our impact and presence in the industry as designers, consumers and developers.
Her focus being practical design that serves multi-purpose and a 'seasonless' response to industrial based consumerism and production.
She reflects upon the impact of her work with a circular, sustainable approach to manufacturing and production, from concept to final product.
Often sitting on the fence of conceptual and commercial design, Caitlin Elton wants you to dive into her world and thoroughly enjoy your time there. 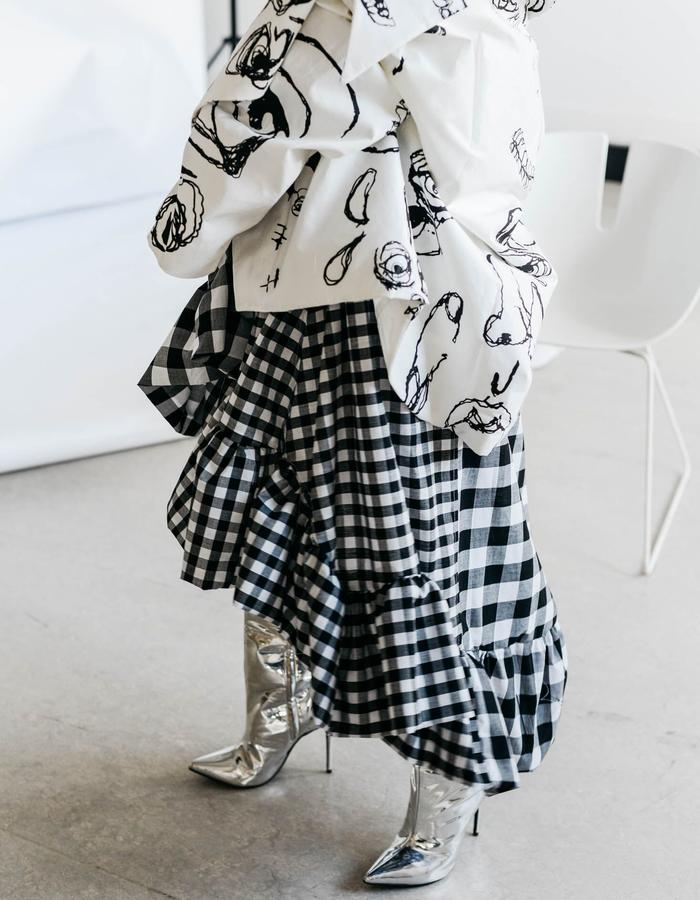 While designing this collection, I was drawn to women in the 19th century who embroidered their garments while admitted for treatment in psychiatric asylums. My favourite piece found was a jacket created by a female German patient Agnes Richter.

In a Victorian-era German asylum, seamstress Richter painstakingly stitched a mysterious autobiographical text into every inch of the jacket she created from her institutional uniform. Richter returned to the feminine art of embroidery in a voice seldom anyone understands.
Fashion of the 19th century was an era of splendid excess. Frills, corsets and petticoats aside, this era had more to offer than surface level 'frou frou'. Exploration and experimentation into 19th century womenswear features throughout this collection, with a particular focus of practicality and personality women would inject into their aesthetic and style.

As a complete juxtaposition, I also explored the incorporation of Western cinematography style seen throughout the Spaghetti Western genre. Particular focus was given to the ethos and creations of Italian director, Sergio Leone. Usually operating on a shoestring budget, these films were made. the directors of these films shared a sense of radicalism, of anarchy, of a moribund fantasy world being turned on its head. Leone himself wanted to bring a larger than life quality to the screen and characters and he was very influenced by classical history and myths.

I re-imagined these conceptual themes, tweaked them to suit a unified design realm and begun the collection by creating a dress with free-hand machine embroidery. From this the embroidery evolved into a print that later developed into free-hand painted fabric.

As a designer, it was imperative to me while designing this collection that I remained as eco-conscious as possible during toile and manufacturing stages. With that, all shoes created and designed for this collection are re-upholstered and hand-painted, re-purposed shoes thrifted locally. Some fabrics that were purchased were sourced from vendors selling excess fabrics before they were sent to incarceration. All other textiles that needed to be purchased were otherwise organic fibres.

Although, seemingly worlds apart, the common thread that lies between Richter's autobiographical embroidery in a German asylum and Sergio Leone's influential and characteristic impact on generations of cinematography is that both forms of art were simply a case of ennui masquerading as entertainment and art. Above all, the heart and soul of this collection is innovation and creative freedom.