Born in Istanbul (1983), Burce Bekrek graduated from Istanbul’s Marmara University (2005) - Faculty of Fine Arts, Textile and Fashion Design with an honors degree.
Bekrek then went on to relocate to Italy to study the Image Consultancy at Istituto Marangoni, Milan.
Later deciding to stay on at Istituto Marangoni to follow a masters program in Fashion Styling. Meanwhile, she worked at the projects for D&G and Dsquared2. Upon completion of the Master of Fashion Styling, with honors, she moved back to her hometown of Istanbul to take up the role of trend and concept advisor - working alongside her father at "Burce Textile”, a family-owned textile company.
Meanwhile she has worked as designer and as commercial stylist for a leading denim company again, based in Istanbul. As a freelancer, her commercial fashion designs were used by major brands such as Porsche, Audi and Bentley - for the AutoShow fair.
In 2008, Burce received Fashion TV Turkey’s "Most Promising Fashion Designer” award and started to work as an Instructor at Yeditepe University Faculty of Fine Arts, Fashion and Textile Design Department. Bekrek has been teaching "Fashion Styling” since 2008 and in 2012 she also started to teach at "Italian Art and Design” department. In 2014, she became the instructor of Fashion Design / Ready-To-Wear Graduation Project Lecture.
In December 2010, Bekrek established her own brand "Burce Bekrek” and launched the first collection "Intro/Versa Fall 2011” at her flagship store in Nisantasi, Istanbul. The first Burce Bekrek Store is nestled in a discrete courtyard in the heart of the prestigious Istanbul shopping district, at Abdi Ipekci Street, Nisantasi. Designed by Superstudio’s architect Sedef Kirdok and Burce Bekrek , the space is an expression of Burce Bekrek’s personal aesthetic with an eclectic style, raw materials and intimate spaces.
With her first collection, she has shown at a Runway Project which has been organized in Netherlands Consulate General in Istanbul, Turkey. And she has also been nominated in the Elle Style Awards Turkey for the Young Designer section.
Bekrek showcased her "Interleave- Spring Summer 2013” collection at MERCEDES-BENZ FASHION WEEK BERLIN. And with her "Causalità.8- Fall Winter 2013” collection she attended ZipZone Trade Show during Paris Fashion Week. Since the first season she showcased her collections at the trade shows like Premiere Berlin, Paris Sur Mode, Who’s Next Paris and Mercedes-Benz Fashion Week Istanbul.
Within ten years she developed an unique signature style for modern designs with a focus on clean cuts, excellent fit and high quality fabrics. Serenity and minimalism are the core foundation throughout Burce Bekrek´s design process. She is focussing on the simple pattern of a garment and is refining it with her remarkable details. By designing unique, functional, tailored and high quality pieces of clothing she aims to create an outstanding yet simplistic look and a perceptional lifestyle. The brand focuses on designing individual pieces that create unique styles to form the coolest wardrobes.
Known for her modern silhouettes and remarkable architectural details use, the techniques she utilises serve to create clothes that effortlessly combine traditional craftmanship with contemporary style.
In 2013, Burce Bekrek became a part of ‘Fashion Incube Istanbul’ project and she got consultancy from CFE LONDON. She also showcased her Spring Summer 2014 collection at PARIS SUR MODE during Paris Fashion Week and MERCEDES-BENZ FASHION WEEK ISTANBUL. In 2014 she was one of the two Turkish designers who had been published in ‘Istituto Marangoni Talent Book’ .
The designer made several collaborations with brands both from fashion sector and also FMCG sector. She designed a "White Shirt Line” for the famous multilabel brands store "BILSTORE” under the name of "BURCE BEKREK for BILS”. For Papia brand she designed the decor towel series called ‘Fashion Capitals’. Lastly for Enza Home Furniture Brand she designed living areas for their ENZA HOME BOOK Project. As a fashion designer she also designed fabric collection and product designs for the spaces she created for Enza Home Book. 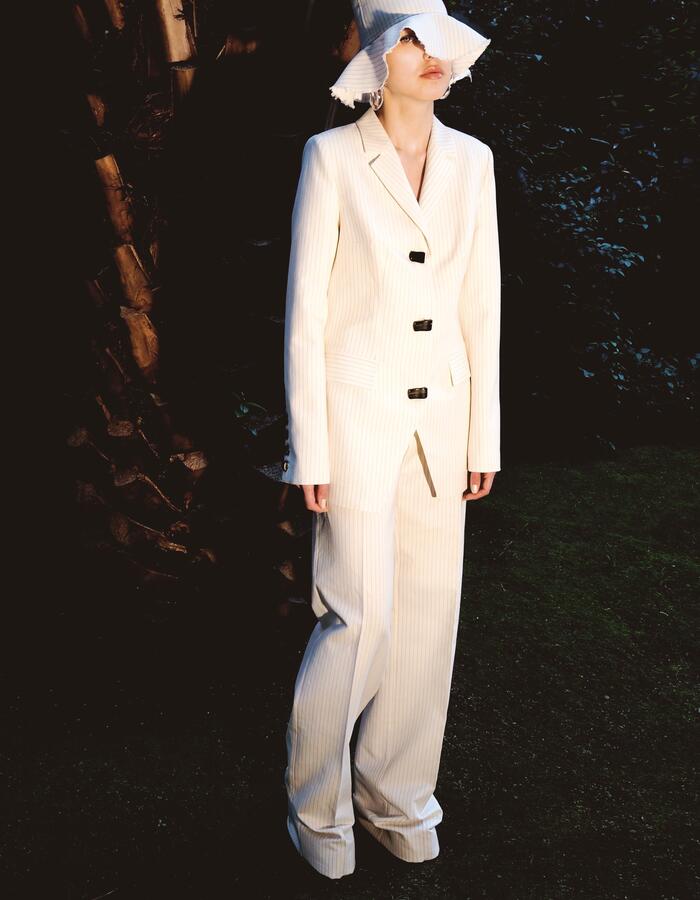 INSPIRED BY WALTER LEBLANC'S TORSIONS, THIS EFFORTLESS CHIC COLLECTION'S A WAY TO STYLE OUT SUMMER IN CITY. LIGHTWEIGHT SUSTAINABLE AND NATURAL FABRICS, CLEAN LINES AND EFFORTLESSNESS ARE THE HALLMARKS OF THIS UNDERSTATED YET ELEVATED SUMMER COLLECTION. REMARKABLE MANIUPULATION DETAILS CELEBRATE THE HOUSE’S REVERED LEVEL OF CRAFTSMANSHIP. THIS COLLECTION CONSISTING OF VERSATILE AND LUXURIOUS CLOSET ESSENTIALS AIMS TO FORM THE MODERN WOMEN’S NEEDS FOR SUMMER WARDROBE.