Azar Rajabi's narrative is defined by her exploration of beauty and what it means to be human. Drawing inspiration from emotions and their impact, she takes a conceptual, bold, and graphic approach that endeavours to translate these emotions into womenswear and wearable art.

Azar Rajabi is a Canadian fashion designer who trained in Milan with her MA in Fashion Design from Domus Academy. Azar has interned and assisted in Milan and New York City at luxury houses Damir Doma, Hogan, Casamadre, and Prabal Gurung. In 2017 she was one of 5 young designers to collaborate with Nike and NikeLab for the VaporMax worldwide campaign and was labelled a “Vision-Air” and innovator of tomorrow. Her work for Nike was also an installation in NikeLab’s flagship store in New York City. In 2017, Azar’s work in jewellery for Prabal Gurung and Atelier Tasaki was realized and worn by Deepika Padukone in the Met Gala in 2018. In July 2018, Azar was one of 10 young designers in the running for the Franca Sozzani Emerging Designer of the Year Award; a Semi Finalist for the CNMI Green Carpet Competition selected by Camera Nazionale Della Moda and Eco-Age. Her work highlighted the idea of celebrating Italy and Made in Italy, using innovative sustainable materials new, and repurposed. Azar’s works have been featured across many fashion channels including Harpers Bazaar, Vogue, WMag WWD, and CNN. She is presently a full-time womenswear designer based in Montreal. 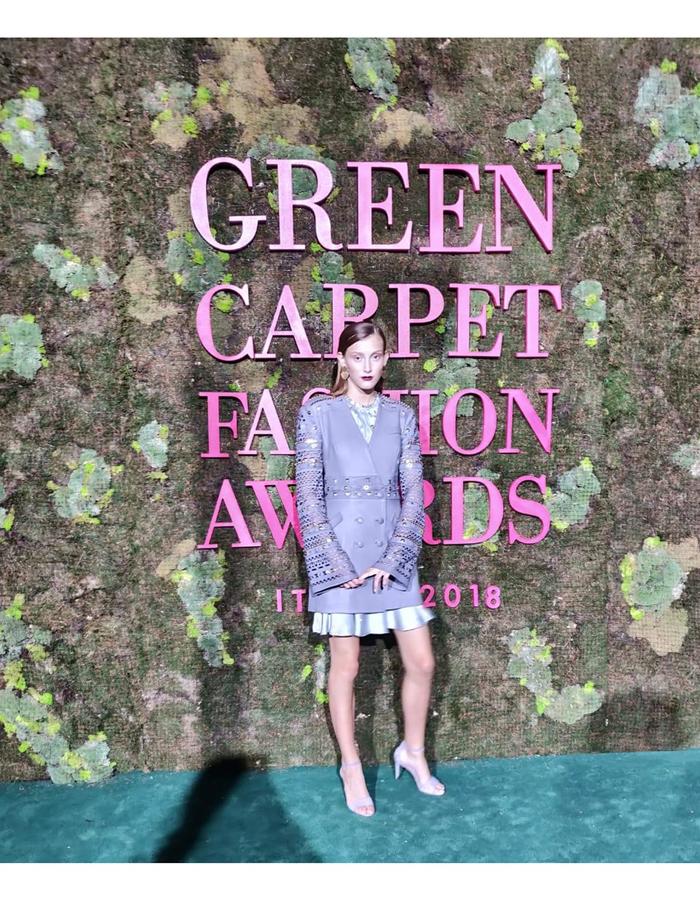 My work was inspired by the idea of Made in Italy and Celebrating Italy. I wanted to capture the beauty and emotion that I had experienced while living there.

The tailored double breasted jacket is made of an innovative eco leather tanned with rhubarb plant. I created the lasercut lace which was developed through my personal imagery of Italy- from Portofino and Firenze, to the Italian flower lily, and the idea of Italian culture and closeness. The laser cut was done using an energy efficient CO2 machine.

The laser cut lace was highlighted through hand woven elements and embellishment using repurposed gold plated enamel buttons. These buttons were given to me by a local wholesaler in Montreal for this project- as they are unsaleable, discontinued, discoloured, and damaged. These buttons were going to end up in a landfill.

The metallic dress is made with Seri.co Certified Silk Satin, and lined with GOTS Certified Organic Silk Satin Made in Italy and includes raw seam finishings to reduce my impact. The dress also includes the repurposed gold buttons, and polyester buttons from the same button supplier, all Made in Italy.