Ashley Fuentes is from Long Island, New York and graduated from Pratt Institute in Brooklyn, NY with a Bachelor of Fine Arts degree in Fashion Design and a minor in Art History. Ashley became interested in fashion at a young age and started using clothing as a way to distinguish herself from her identical twin sister. Drawing inspiration from a variety of sources, Ashley looks to everything from the local Brooklyn scene where she attended Pratt Institute to avant-garde designers, abstract artists, and experimental musicians who heavily influence her design sensibility. She has interned at Calvin Klein, Gilded Age, Timothy K, Cardigan by Lynne Hiriak, and Dolce Vita Apparel.
After graduating, Ashley felt compelled to find ways to learn more about the production and manufacturing aspect of the fashion industry on a local level in NY. Ashley became an apprentice at Knickerbocker Mfg. Co. learning from two of the owners, Daniel McRorie and Kyle Mosholder. Soonafter she became a samplemaker and production assistant for the cap program. Ashley was also able to apply her experience and enthusiasm to the cut + sew processes at the Brooklyn Fashion + Design Accelerator under Tara St. James in 2015 while working with Rickard Guy, McRorie's namesake label.
Ashley also worked at BDDW in Philadelphia as a patternmaker and upholsterer. She now lives in the Los Angeles area and is working on a follow up to her thesis collection. 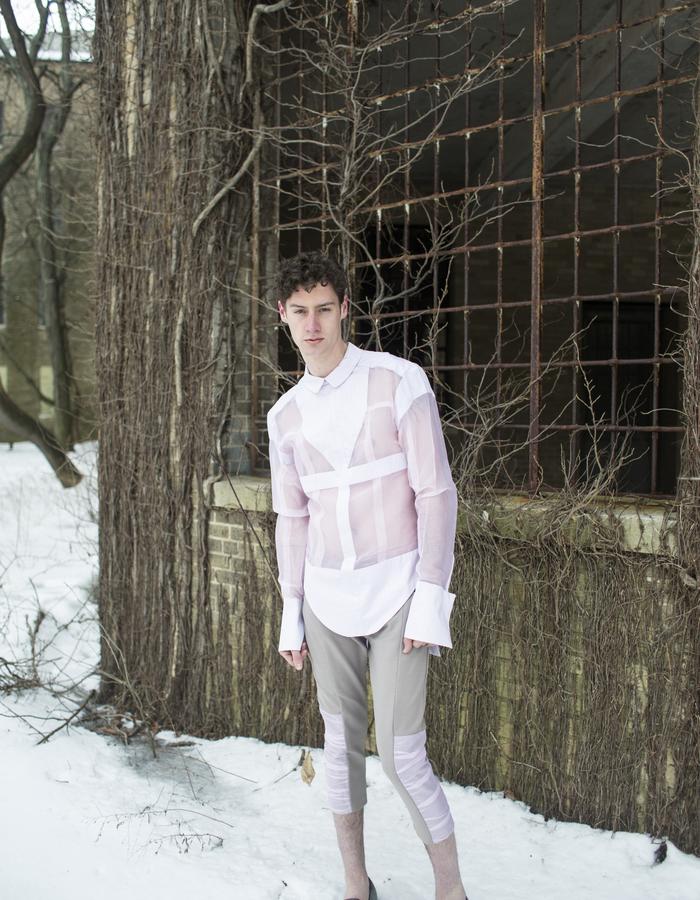 Ashley Fuentes’s thesis collection explores menswear with feminine details. After taking a class exploring feminism in literature, art, and music, Ashley began to wonder about gender stereotypes in fashion and how it is more common and acceptable for women to adopt masculine ways of dressing than it is for men to adopt femininity in their clothing. Ashley found it necessary to cater to a more open-minded man who embraces his “feminine” side and has an individual style. Ashley explored these ideas by combining fabrics associated with menswear, such as shirting and suiting fabrics, with sheer fabrics and fabric manipulations identified with womenswear, in combination with subtly exposing the male body and reinventing classic and historical menswear silhouettes.