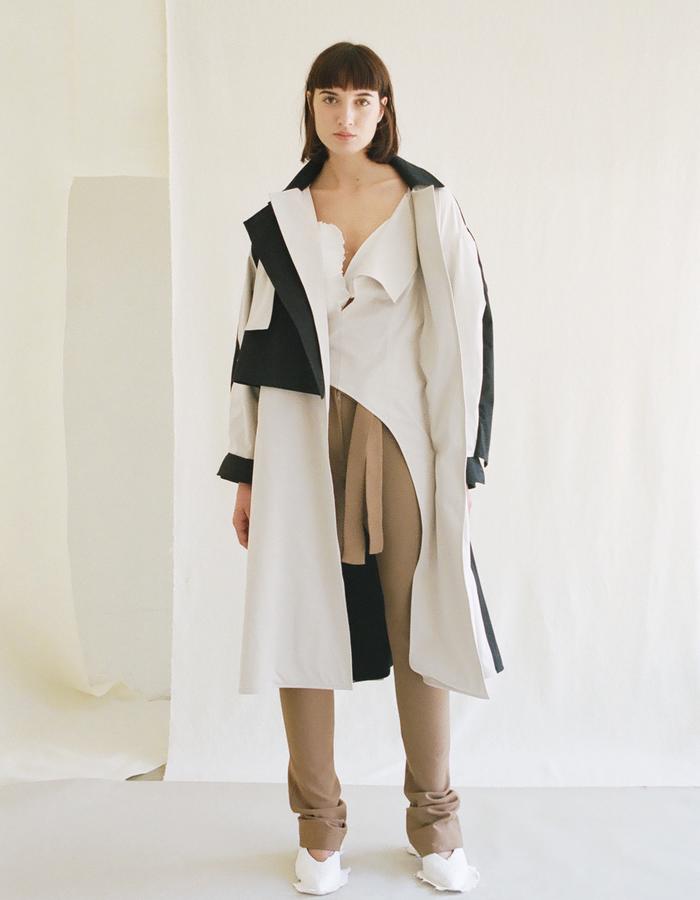 Womanhood is an ever changing conceptualisation, a fluid idea defined by society and culture. There is a constant evolving effort to reconcile the dissimilarities of identity reflected through standards of beauty, sexuality and gender roles.

I started researching how women contemporary artist interpret womanhood and our bodies through sculpture. Also, I did a deep research in 20th century literature from inspiring figures like Simone de Beauvoir and their analysis on the perception of womanhood, as well as a deep research of the time’s wardrobe; classic masculine tailored garments and usual feminine under garments. With all that knowledge I began my own interpretation of womanhood.

What stroke me the most is realising the fact that I was not working on a solid static idea but rather an uncertain vision in which anyone could have its on view. This conclusion is portrayed in the fluidity of the garments’ shapes as well as the distorted prints. The idea of beauty is our own interpretation of different theories portrayed in our society and mind, this is why distortion is a relevant idea that is portrayed throughout the collection.

Firstly I began with a literal interpretation of the body through sculpture. The bust casts are the objectification of the forms the artists have been resembling. With these figures I am trying to make a literal statement: our body parts are separated from us as a person and we are viewed primarily as a physical object of male sexual desire. As a consequence, empowerment is what I am trying to render when a women is visibly wearing her own torso: normalise women’s breasts would eradicate the idea that our body is to please somebody else.

Secondly, one essential evidence is that we are continuously creating new identities for women as society evolves. We live under the pressure of infinite gender roles that sometimes creates a bias feeling in us making us feel insecure and anxious. This idea is portrayed as dual identities and can be seen in the double shoulders and unfitting shirts which seem as if two or more people are wearing it but in the absence of those. One body dealing with different identities.