Antonija Bucić has a bachelor's degree in Textile and Fashion Design. She is currently at her Masters studying Fashion Design at the Faculty of Textile Technology in Zagreb. She worked for the Bomber Clothing brand and currently works as a lecturer of Fashion Illustrator at United Pop Academy. She uses Adobe Illustrator and Photoshop to design garments with an emphasis on sustainability. 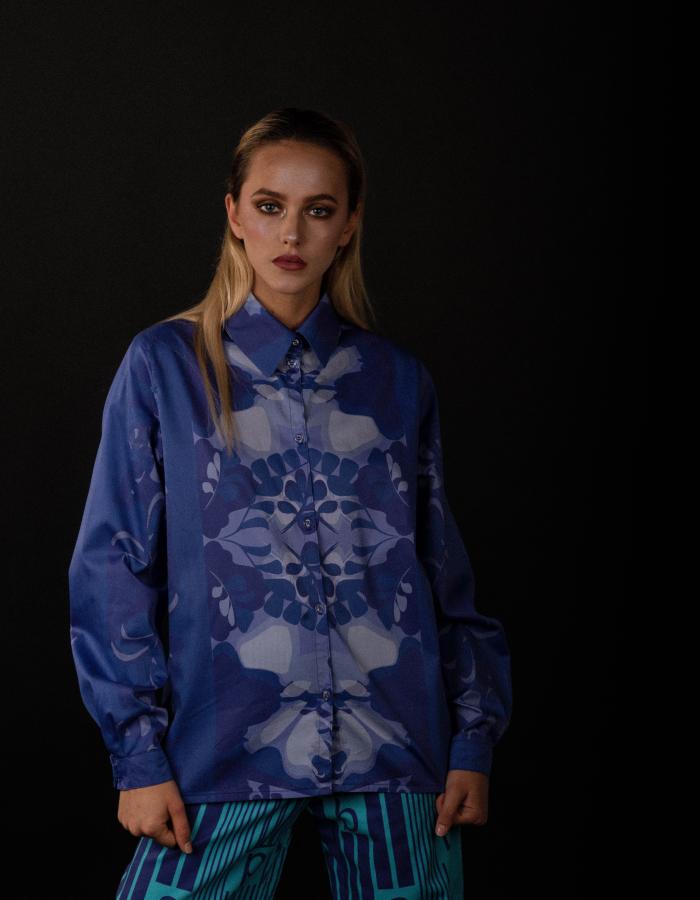 Fall/Winter women's collection "Pieces of Vanity" is inspired by fragments of the portrait "Vanity" from 1907 by Frank Cadogan Cowper. The task was to define and elaborate the elements of a desired portrait or self-portrait and to study them on a micro level, with the idea that recognizable elements from the dating period of the artwork remain in the collection. In addition to portraits and self-portraits for inspiration, the task was to explore personal visual stimuli, influences and materials around us and to answer the question - what truly inspires us in everyday life? It was necessary to record such moments in the form of photographs and apply fragments from these photographs in the collection.
Cowper's early work is strongly influenced by the Pre-Raphaelites, but around 1906 he was more accepting of the Renaissance idiom, often emphasizing rich brocades to create a decorative effect. The title of the painting refers to the painting genre known as vanitas, which was popular in the 16th and 17th centuries. Usually still-life, vanitas paintings served as a reminder to viewers of their own mortality and the transitory nature of earthly possessions. The title reminds us that neither the beautiful woman in her luxurious clothes nor the ripe grapes in the background can bloom forever - in time both will fade and die.
In addition to portraits, the collection is also inspired by photographs from visited exhibitions, from walks in nature, as well as the Beatnik subculture. The most prominent fragments are stripes, black color, black jacket, straight- cut pants and they are all applied in the collection. From the "Vanity" portrait, the most prominent fragment, which is visible in the collection, is the Renaissance serpentine design on the woman's dress.
The influence of the subject of the portrait – vanity – influences the creation of the collection. What is vanity? Can we recognize it in ourselves and others? It is definitely a negative term and all people are vain, without exception. However, when we say that someone is vain, we mean the overemphasis of that trait. A vain person strongly identifies with ego, which violently clings. Very often behaves arrogantly, especially when criticized, because vain person has low self-esteem. Vanity is said to be poison for the soul, because it prevents people from their self-fullfilment.

Trousers, shirt and jacket have letters which denote words or fragments of vanity (a – arrogance, b – behaviour, c – criticism, e – ego, i – identity, p – poison, s – selfrespect).
The shirt with a floral pattern is inspired by the damask pattern from the portrait, and represents a form of liberation from personal vanity and the flowering of a person who is freed from such negativity. Macrame jacket made of velvet ribbons filled with polyester filling is inspired by the Renaissance serpentine design on a woman's dress from the portrait. The second black jacket is inspired by a flower from nature, and its weight and appearance symbolically show the weight of the burden of vanity. Pants, shirt and jacket with letters and lines visually give the impression of barcodes, which round off the meaning of the entire collection, giving the impression that the collection itself is one big barcode that needs to be explored and scanned to discover its meaning. When the pieces are "scanned" and analyzed more deeply on a micro level, it can be concluded that the collection features vanity pieces.