Anne Sofie Madsen graduated from the Royal Danish Academy of Fine Arts and trained under John Galliano in Paris, before moving to London to work for Alexander McQueen as a Junior Designer. In 2012 she started her own label and presented her first collection at London Fashion Week in February. She won Danish Fashion Award and GenArt’s Fresh Faces in New York in 2012 and was chosen as one of Vogue`s Talents in Milan in the same year. In 2013 she won the prestigious DANSK Design Talent prize and in 2015 DHL Exported in Tokyo. In 2014, the brand presented its first fashion show at Paris Ready-to-Wear Fashion Week and has been showing there since. For the seasons of 2017 the brand is part of the swarovski collective.

Drawn by the point where fashion replaces the body with something abstract - an idea or ideal instead of an organism, Anne Sofie Madsen’s designs are built on contrasts and ambivalence. The garments are created for a person who wants to be both inviting and out of reach, someone who is streetwise and ladylike, boyish and feminine. Resulting in designs that straddle between fanciful fun and serious intricacy of details.

The brand wants to challenge and push the boundaries for everyday wear and at the same time create garments that are in their own way functional and wearable. It’s not about garments for princesses in a fantasy world, but a wish to bring magic into reality and preciousness into fashion. 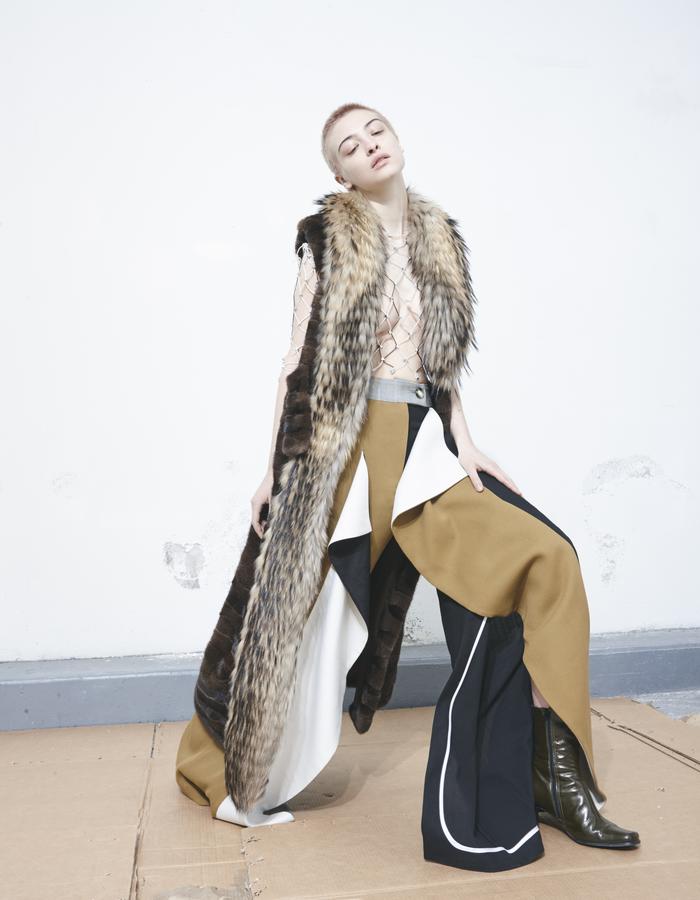 The collection is inspired by the fact that Elvis Presley was a twin-less twin and that his great-great-great-grandmother was Native American, a Cherokee Indian called morning white dove. The silhouettes reflect the presence of both fantasy and reality. The experience of the fabrics, textures, and embroideries in the collection, is an embodiment of the mystery that lies beneath all existence. The collection is an exploration of a parted human, searching and longing for the lost and unknown.
Leather, feather embroideries, rubber strings and fur messed up, in an uncanny juxtapositions, combining spurious and glamorous,
working class hero and tragic glam-clown.
An invention and reinvention of the American dream.
The embodiment of the effect of inner imagination, legend and fame.