André Ribeiro, born 1953 in Bordeaux/France, has studied Jewellery-Design at the “Fachhochschule für Gestaltung” in Pforzheim (Germany) from 1976 till 1981 by Prof. R. Reiling. Since 1982 free-lance designer, he works and lives in Berlin.
The new materials mix, which, in the early 1980’s, caused a lot of head-shaking in the jewellery industry, was a perfect match with the designer’s personal philosophy: “The question of the value of what is intrinsically worthless and the worthlessness of the valuable reflects a stance that is basic to my life,” says Ribeiro.
The brilliant beauty of genuine diamonds shines like stars in the night on the black matte rubber background.The exciting combination of long standing value, eternity, and the everyday is realized in extreme formal clarity. Minimalism in contemporary jewelry.
The question of whether the public would accept as jewellery a product that belied all conventional expectations is already answered today. The idea behind this line in jewellery was copyrighted in 1997 as being of particular cultural importance.
In the meantime, after 30 years existence, this jewellery line is consider as a “classic line” which is updated persistently. 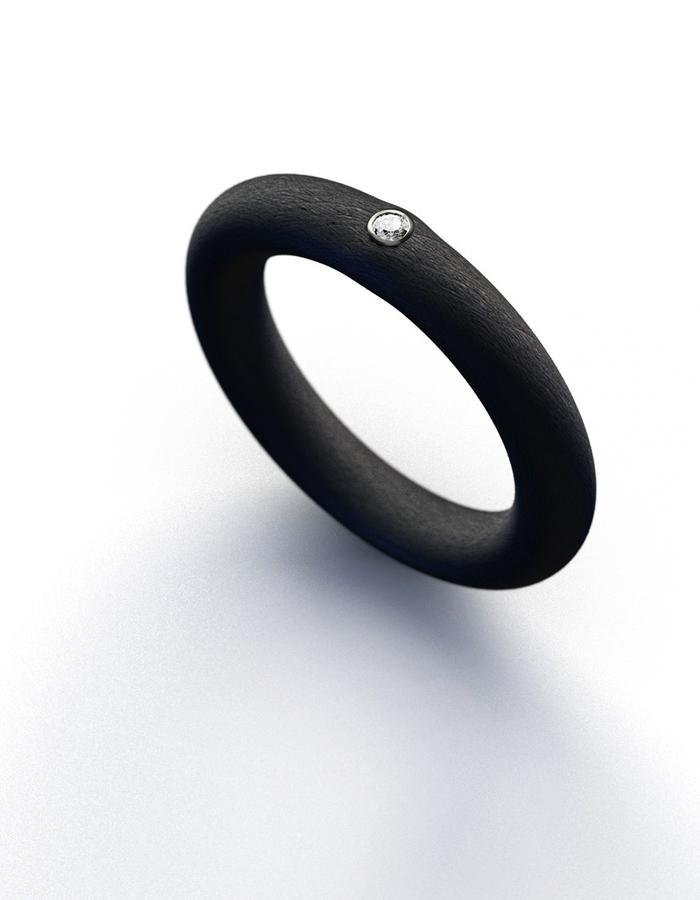 Light loves to play in the dark

“The main difference to other jewellery Designers is my choice of base materials,”explains the French-born freelance designer now living and working in Berlin. “Conventional jewellery is usually based on semi-metals and stones or precious metals. My approach, however, is to use synthetic rubber as the carrier
and contrast material for a classic composition with the diamond.”

Aside from his favourite Artist Marcel Duchamp, the jewellery expert gathers inspiration from formal contrasts,which encourage the mind to get thinking:
“My favourite is the simple shaped ring.The balance of the proportions, the ratio between ring strength and diamond size – that’s all crucial to create a classic form such as the diamond ring.”