Originally from California, Alexandra Groover moved to London in order to
promote her designs to the international fashion market. Utilizing her learning experiences gained at Central St. Martins and Rhode Island School of Design and in the studios of Alexander McQueen and Zandra Rhodes, she decided to launch her own company in 2008. Her monochromatic Black Label collection was created to fulfill her need for expression through sculptural and textural manipulations of fabric.
Now in her seventh season, Groover has received glowing reviews from the press (including i-D Magazine) as well as support from her mentor and friend, British fashion designer Sir Paul Smith. As well as creating a new collection and accompanying films & performance two times a year, Groover has also been busy working on special projects with artists like cult drone musician Stephen O’Malley of SunnO))) fame, Japanese prog-rock band Bo-Ningen, gothic singer Chelsea Wolfe, photographer Paul Phung, tattooer Rafel Delalande, and London musician Christos Fanaras.
“Alexandra Groover is a young designer whose jersey collection is both creative and wearable.” Sir Paul Smith, i-D Magazine
www.alexandragroover.com 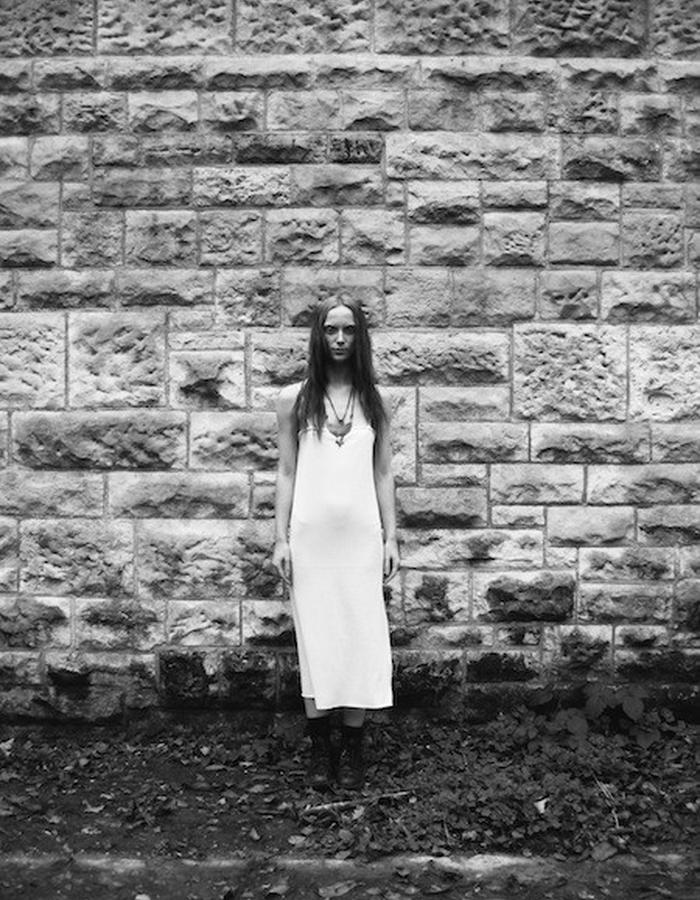 This season sees the premiere of SYMBIOSIS, yet another body of work in what was originally a trilogy of short films. Following BIRTH, LIFE, DEATH, AFTERLIFE, RESURRECTION, REBIRTH, and EVOLUTION, SYMBIOSIS is a continuation of Groover’s exploration of the natural sciences and their relationship to the human condition. Embracing the theme of SYMBIOSIS in the form of creative collaboration, the exhibition encompasses Groover’s SS15 collection of garments initially inspired by a choreographed piece made in London in collaboration with choreographer Christopher Matthews, and an exhibition of drawings by tattooer Rafel Delalande for La Voisin London, Groover and Delalande’s new collaborative print design collection.

Groover’s entire monochrome collection is created by using positive and negative shapes from only a few pattern pieces and fabrics, creating surprisingly different silhouettes and shapes for each look. This season, each garment is made using the evolutionary variants of one original petal-shaped pattern piece, which expands and contracts to echo the life cycle of a rose in bloom. Each garment can be worn a number of ways, encouraging the wearer to style it to create their own personal look.

SYMBIOSIS will also house the London launch of the new La Voisin London collection, Groover’s latest collaborative collection with tattooer Rafel Delalande. Launching with a capsule collection of printed scarves, t-shirts, shawls, and hoods, Groover’s signature all-black designs are given a new identity adorned with beautiful monochromatic prints of Delalande’s darkly themed drawings. Inspired by centuries of cults and rituals throughout the world, the collection consists of a series of illustrated garments and accessories, each telling a story of Groover and Delalande’s travels to different countries and their own personal interpretations of the traditional rituals of that particular culture. This season features the SYMBIOTIC images of SKIN, MUSCLE, and BONE, as a symbol of mortal flesh and immortal soul. Stockists include Lilian Tokyo and Cannabis Tokyo.

Exhibited at Flaq in Paris, Groover’s new collection and Delalande’s latest drawings and prints will hang together alongside the La Voisin London collection, clearly illustrating the successful visual marriage of their darkly unique aesthetics.

After studying at Central St. Martins and RISD, and working in the studios of Alexander McQueen and Zandra Rhodes, Alexandra Groover launched her first collection for Autumn Winter 2009. With press from i-D, Dazed, Vogue.com, Harpers Bazaar and Grey, and collaborations with cult bands SunnO))), Chelsea Wolfe, and Bo Ningen, Groover has rapidly gained a strong following within the fashion, art and music industries.

“Alexandra Groover is a young designer whose jersey collection is both creative and wearable.” Sir Paul Smith, i-D Magazine

As well as accepting wholesale appointments in Paris from 23rd-29th of September 2014, a selection of garments and prints will be available for purchase at the exhibition space. For more information, please contact: