AKHL was founded by Akhil Nagpal in 2019.

After graduating from the renowned Central Saint Martins College of Art and Design in 2017 with various honours, he worked with leading designers in London and New Delhi before starting his label AKHL in 2019.

AKHL is defined by its commitment to innovation, experimentation and crafting of evocative pieces of fashion by contemporizing traditional
handcrafting techniques.

The genesis of all designs at AKHL are rooted in the development of distinctive and complex textiles, engineered using unusual materials and a wide range of processes, including handweaving, hand-interlacing, traditional hand-embroidery, applique and gradient hand-dyeing.
AKHL pieces are also made different by their novel shapes and cuts that elementally emerge out of the structure, form and tactility of its one-of-a-kind textiles.

Since its founding, AKHL has been a recipient of various awards.
It showcased its debut collection at Lakme Fashion Week SS20 as the winner of the prestigious Gen Next competition and also won the Grazia Young Fashion Award in 2021. 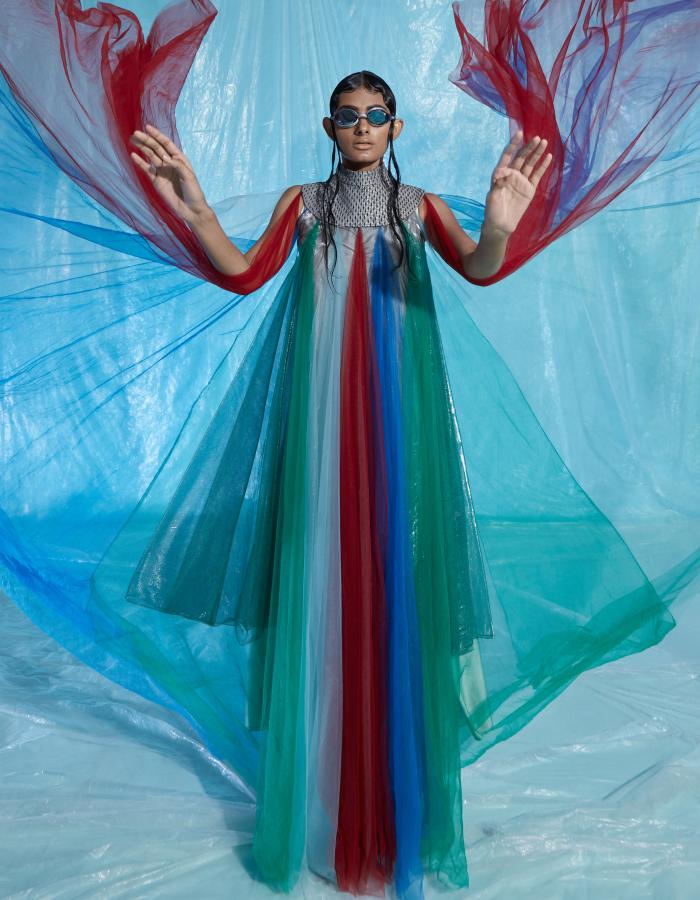 This collection was inspired by the crests and troughs of oceanic waves, their undulating ephemral forms, their kinetic dynamism and the illusionary colours that effervesce off of their surfaces.
Some of the key silhouettes for this collection originated from imagining fabric as the surface of the seas, gathering it and patterning it in forms that captured the waves’ curvature, movement and flow.
Our signature textiles were formed anew, inspired by the translucence of
oceanic waters, their furious fluidity and their powerful reflective qualities. The colours, inspired by the vivid hues that lie beneath oceanic surfaces, peering out, ever so faintly as pastel tones, through the the density of the water.