Aimee Robinson is a Kent/London based lingerie designer and machinist specialising in couture. Aimee started her journey into fashion 6 years ago when undertaking a womenswear diploma before graduating from The London College of Fashion in 2021, in Fashion Contour. Aimee won the Luna Mae award 2019 and began work as a couturier with Luna Mae, whom she was with for 2 years. Aimee often works with silk satins, tulles and various high-quality fabrics and techniques to curate pieces with a classic silhouette with an innovative edge. Colour plays an important role in their journey as a designer and is at the forefront of the nonpareil collection. Aimee's pieces are designed to be seen and look as beautiful on the inside as they do on the outside, with creative techniques to ensure the silk lining is delicate and intricately executed. 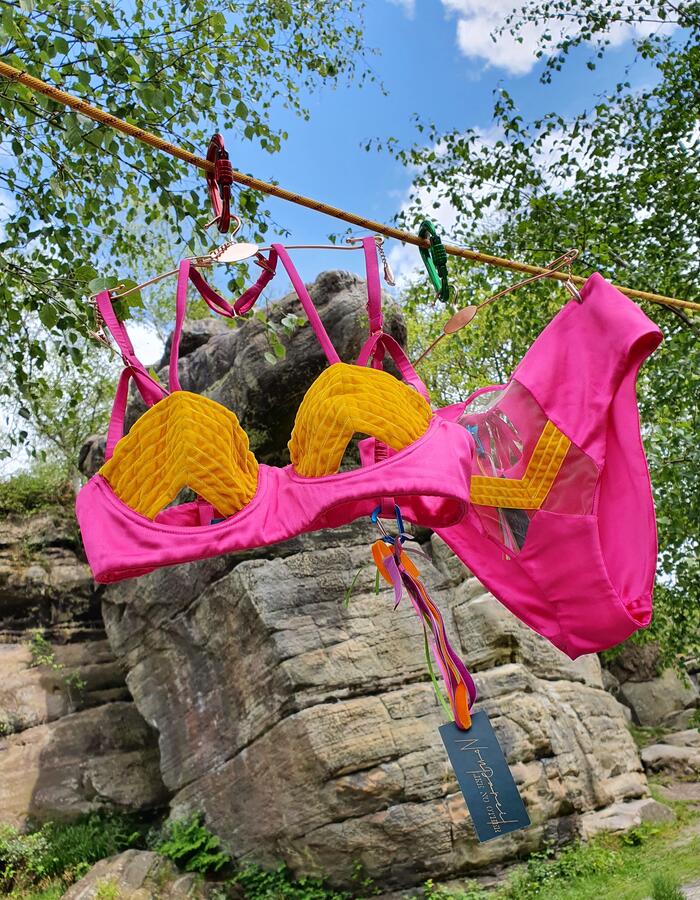 Nonpareil is inspired by rock climbing and more specifically the southern sandstone in Kent, in which Aimee has family roots. Nonpareil draws inspiration from the importance of colour in climbing as well as the specific climbing routes and first ascents of Aimee's father, Paul Widdowson. the collection name, Nonpareil meaning 'unparalleled, unrivalled or like no other' is named after one of the first ascents he put up in 1992, one of many on the southern sandstone.

These looks are from two ranges, the first is the arête range taking inspiration from the ridges on the southern sandstone and the formation of rock layers. The Arête set includes textured velvet ribbon stacked and angled in a way to reflect the sandstone arêtes aimee and her father climb regularly. Each piece is crafted with luxury finishes and couture sewing techniques. Every detail has been considered and nothing has been overlooked to create these bold, fun and elevated pieces.

The second range, Beener receives its inspiration from the endless amount of hardware/equipment that is used in climbing. The humble carabiner (beener) is a staple in the climbing world, so it only seem fitting nonpareil pay tribute to a piece of equipment that saves a life every time a climber falls off.

The Beener body is a silk bodysuit with various ribbons displaying the tension and pulling that a carabiner is used for in the climbing world. Featuring couture finishes and complex construction such as curved seams, bagged out v wire, silk lined inner and bagged out cups with silk covered straps.